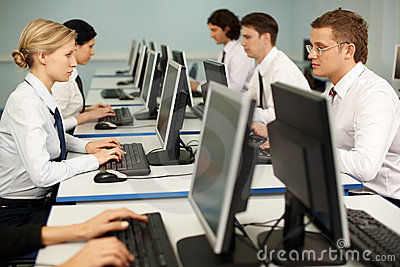 Just when I thought college had exhausted its ability to be too technological for comfort, the Massachusetts Institution of Technologu and Harvard decided to team up to develop a new software, known as edX, which has the ability to grade students’ essays in the span of seconds. Now, it seems that even an English major such as myself can’t catch a break. Does anyone else think this is an appalling idea? Today, technology has literally encompassed every aspect of our lives. Some days, I am one iClicker question away from quitting college.
EdX takes on a challenge which has in the past been viewed as impossible to accomplish. Remember those lovely colored multiple choice forms you must bubble in precisely and tediously in order for a certain machine to read your answers correctly? Machines can now not only grade your multiple choice exams, but your essay and short answer test as well. Did I mention in a matter of seconds?

According to the New York Times, the time it takes for this software to grade your essay is instantaneous. With edX, there is no more waiting around for your grade to come out. The presidents of this non-profit initiative stress this aspect of instant feedback. Supposedly, students love getting a speedy response to their work, as it allows for efficient learning. The question is, how many students are willing to sacrifice their grades for a fast response? Receiving a computer-generated response means absolutely nothing to me, regardless of whether it takes five days or five seconds to receive my grade. I barely have enough faith in a computer’s ability to accurately assess my multiple-choice test. Now it wants to attempt to grade my essay.

Not only is this short response dangerous as far as grade correctiveness goes, it is offensive to my existence as a human being. As first-year English major Priscilla Leung said, “how is the creativity and depth of academic merit of the essay gauged?” Let’s say it takes you three days to write a five-page paper for class, which is approximately 1500 words. This software supposedly takes just seconds to grade your work. I’m not going to do the math on that one, but we know how much time will be spent viewing the thesis sentence you rewrote four times—maybe a few seconds. The creativity and style of your essay will be lost.

How does this affect professors and teaching assistant jobs? At the University of California, Santa Barbara, this program would come in handy, given that many classes are large and professors without teaching assistants may have up to 40 papers to grade at one point in time. The New York Times wrote an article about edX titled: “Essay-Grading Software Offers Professors a Break.” But do we want to give our professors a break? And how much of a break? We are paying thousands of dollars a year to attend college, not to mention the hard work we put into writing these papers. It only seems fair that the professor who assigns this essay should sit and grade it old-school, red-ballpoint-pen style. Does this set up for a double standard between students and professors? It is the professor’s and TA’s paid duty to sit in said fashion and grade our paper with their own eyes, not with some fancy machinery. Simple quid pro quo.

Currently, edX is only used for non-credit courses offered by MIT and Harvard. But recently, UC Berkeley has joined the two universities in the program technology and will use edX for several of its online courses. Will they draw the line there? I have no doubt it will spread to other universities and colleges as a new and efficient form of grading exams. We could even see it at UCSB. I wouldn’t be surprised.

Technology was created to assist humans, but instead, it has corrupted us into the belief that every task must be done through a pre-programmed mind. Hand me a telephone, a computer, a lightbulb, a car. I’ll use those. I’ll even use a scantron to appease the technical gods. But please, don’t grade my writing—my own personal thoughts and ideas—by a computer. That’s just a cop-out.