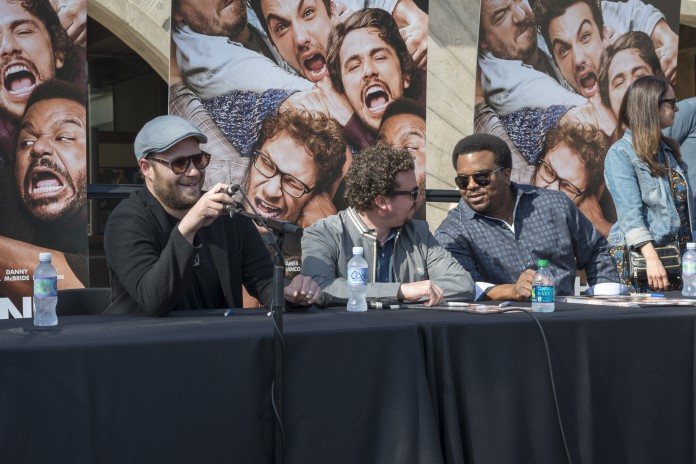 Starstruck students packed Storke Plaza on April 23 for a chance to meet the stars of the upcoming film “This is the End.” The appearances by Seth Rogen, Danny McBride, and Craig Robinson were part of the prize that the University of California, Santa Barbara won from Eventful.com, which pitted colleges against each other for the opportunity to see an advanced screening of the movie as well. The highly acclaimed movie was shown at the Camino Real Marketplace later Tuesday evening.

According to comingsoon.net’s website, “‘This is the End’ follows six friends trapped in a house after a series of strange and catastrophic events devastate Los Angeles.” Outside the house, the world is falling apart and continues to threaten the close friendships within. The six friends quickly learn that they just survived the apocalypse, and must accept their fate for being left behind. After leaving their house, their bonds of friendship are all they have left, and are tested by various obstacles. Featuring numerous famous faces such as James Franco, Jonah Hill, Jay Baruchel, and appearances by Rihanna and Emma Watson in addition to Rogen, McBride, and Robinson, this hilarious comedy is sure to be a must-see film.

But the party didn’t truly start until Rogen finally strode down the walkway, donning a newsboy cap and fresh sunglasses, flocked by security guards. The crowds went wild over the Rogen, who doubled as an actor and director of the film.

“Thank you so much for coming out today, UCSB,” Rogen said during the event. “I wasn’t expecting to see this many people to show up. I’m truly honored to be here.”

There was indeed a huge turnout of students. To some, it was their dream come true to see these famous film stars.

“I got my phone signed,” said first-year anthropology major Lauren Trujillo. “This is so cool.”