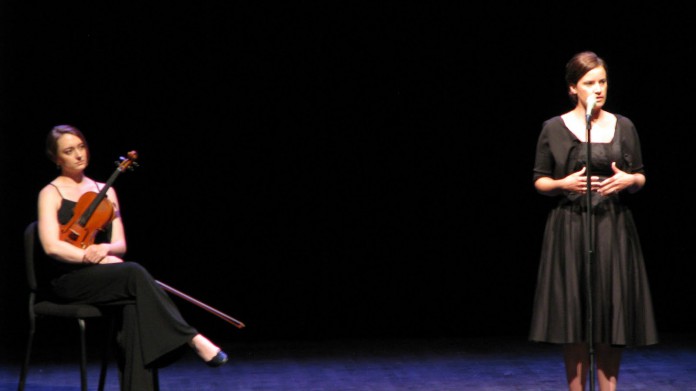 There’s something fundamentally strange (but charming) about the idea of “The Moth Mainstage”—an event where five people stand on stage and tell true stories from their own lives. They’re sometimes funny and they’re sometimes touching, but above all, they’re personal microcosms of the human experience.

The Moth is an organization devoted to the art of story-telling; as their website puts it, “[The Moth] is a celebration of both the raconteur, who breathes fire into true tales of ordinary life, and the storytelling novice, who has lived through something extraordinary and yearns to share it,” alike. Started by poet and novelist George Dawes Green as simply a group of friends telling stories, The Moth has spawned not only events like Mainstage but also story slams (where anyone can step up to tell their stories), a podcast, and The Moth Radio Hour, which airs on stations across the nation, including NPR.

The storytellers that took to University of California, Santa Barbara’s Campbell Hall stage on April 4 were each given 10 minutes to tell their story, with the theme of the evening being “Twist of Fate.” First on stage was Brian Finkelstein, an Emmy-nominated writer for The Ellen DeGeneres Show and usual host of the L.A. Moth Story Slams. After he sufficiently warmed up the crowd, tremulously voiced writer and artist Jessica Lee Williamson took to the stage. As a storyteller, she came on without any script or notes, though her story was obviously rehearsed, perhaps with just the repeated telling of it.

Williamson spoke about her relationship with an adventurous man who lived in a tent. As she said, “when we walked down the street together, people would sometimes slip him a dollar, thinking he was a homeless person. That was because he looked like a homeless person.” The mix of humor and insight that would mark most of the evening’s tales colored her story, which finished with a happy ending—the two of them eventually married.

Following was Kevin McGowan, whose story began, “When I was 35, I moved back in with my mother, Patty.” He had returned home to care for his terminally ill mother, but his story was one of triumph and the rekindling of their relationship; together, McGowan and his mother swapped secrets, watched “West Wing,” and successfully planned a lavish party for her to say her goodbyes despite her lagging health.

The third story embodied the old adage that “truth is stranger than fiction,” when TV writer and independent film actor Craig Chester took to the stage to tell the story of being haunted by the ghost of Montgomery Clift. Chester recounted being approached by two separate psychics who insisted that the ghost of Clift was following him, and wanted him to write a screenplay about his life. Chester drew attention to a number of similarities between his own life and that of Clift—the notable divergence being that Chester is openly gay, while Cliff had been forced to live in the closet throughout his life.

“I could be Monty’s happy ending,” suggested Chester, who recalled how determined he had been to live his life to the best after his experiences with Clift’s ghost.

Filmmaker Ellie Lee followed, telling of the process of making a movie that was very important to her. After work at her local homeless shelter, she learned of the prevalence of abuse experienced by homeless women. Many of them had been abused in the past and many more were still in abusive relationships with the homeless men, compelling Lee to tell their stories. She used her passion for animation to create the film, doing thousands of drawings to accompany the stories the homeless women told her. Devastatingly, the drawings were lost in an accident shortly before they could be photographed for the film. Eventually, Lee managed to finish her film despite the setbacks, learning much about herself in the process.

“I made this film to save my friends, the women at the shelter, but they were the ones that saved me,” she said.

Concluding the evening was 80s film icon Molly Ringwald, who was visibly emotional when recalling one of the most difficult times in her life—the loss of her unborn child during pregnancy. She talked about the struggle of grieving for the unborn—a loss that no one could see, unlike the visible pain of losing a child who had already been born. After learning that a childhood friend had also had a similar miscarriage, Ringwald explained that she was able to move on.

“I named her, and grieved her, and was able to say goodbye,” she said of her unborn daughter.

The quintet of stories made for a stimulating and revealing evening in Campbell Hall, and effectively conveyed the fundamental idea behind “The Moth”; the rawness of the anecdotes was one that appeared to linger, like a moth, in the air long after the presenters finished sharing the poignant snapshots of their lives.