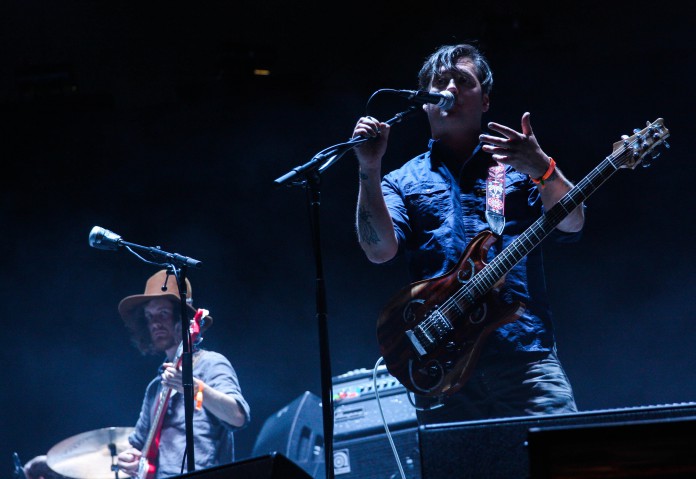 I would like to apologize to anyone who anticipated a review of indie rock band Modest Mouse’s performance last night, because I ended up getting to the Coachella stage only in time to catch “Float On” (which was a well-executed, yet predictable culmination to their show). From the five or so minutes that I did see them, though, I did note that front man Isaac Brock has very intense facial expressions while he sings, to say the least. As in, I couldn’t decide if it looked like he was having a stroke or an orgasm. Blown up on the two jumbo screens, it was slightly terrifying when the cameras zoomed in on his face. But to his credit, it was entertaining and, much like a car crash on the freeway, I couldn’t help but look at it.

Continuing the theme of indie rock, I returned later to watching the Yeah Yeah Yeahs, whose show was also relatable to a crash—if the cars were full of neon green paint, glitter, and iridescent silver sparkles and driven by Karen O, Nick Zinner, and Brian Chase. Truthfully, the explosive fusion of rock and dance music was great enough that the glitz and eccentric outfits bordered on excessiveness. However, the visual elements contributed an unconventionally aesthetic appeal that complemented Karen’s unmistakable voice. She also shirked convention with wild onstage behavior, such as sticking the mic in her mouth at one point, shoving it down her tight pants during another, and spinning it above her head like a lasso. Like Modest Mouse, YYY chose to play one of their most widely known songs last, and closed their set with their radio hit “Heads Will Roll,” causing a surge of cheers with the familiar opening keyboard notes. However, they proved their versatility and synergy as a band by preceding it with songs such as the unforgiving “Sacrilege,” “Soft Shock,” and the more low-key song “Maps,” which Karen launched into after saying, “I’d like to dedicate this song to all you lovers in the crowd.”

The final three performances of my night were Purity Ring, Jurassic 5, and Bassnectar, respectively. Purity Ring, a synthpop duo based out of Canada, was a last-minute decision that trumped my original intention to see Band of Horses. I have no regrets, though, because the ethereal quality of vocalist Megan James and the supplementary synth, vocal samples, and rhythmic underlays of Corin Roddick cast an aural spell over the Gobi tent that put listeners in a dreamlike state. They were brought back to reality only by the deliberate modern hip-hop nuances that Roddick incorporated, a feature that juxtaposed the airy vibes and distinguishes Purity Ring as a multi-dimensional duo.

Jurassic 5 took the audience back in time; not to the Jurassic period, but to the origins of hip hop. Making their debut after seven years of not performing onstage together, the Los Angeles-based quintet took the Outdoor Theatre shortly before 11 p.m., and proved that even seven years couldn’t diminish the quality of the group’s chemistry and unity. Songs such as “Back 4 U,” “Jayou,” and “What’s Golden” served as testaments to Jurassic 5’s prevalence over time, despite the progression (or arguably, regression) of hip hop over recent years. The crispness of their articulation was nothing short of incredible, as they spat out hard-hitting lyrics completely in sync, as if only one person was speaking and singing. It’d be best, then, for me to relate Jurassic 5 to wine; clearly, they only get better with age and experience.

In hindsight, given my lack of experience with Coachella and the absolute fatigue, hunger, and dehydration I felt at this point, it probably wasn’t wise to subject myself to Bassnectar at the end of the night. But I didn’t come to Coachella to become a sage. Bassnectar (aka Lorin Ashton) has a reputation for dominating stages with his overwhelming dubstep, which consumes you and literally makes every cell in your body feel like it’s about to implode. I say implode, because the reverberations from the bass feel like they’re compressing you into yourself. At multiple times I found myself putting my hand against my chest, just to feel the resonance throughout my core that was pushing me further into the ground.

The hour-long set included remixes of Kid Cudi’s “Day ‘n Nite” and Ellie Goulding’s “Lights,” and also featured music that was synced with clips from the movie “The Matrix”; however, I found that the best part of Bassnectar’s set wasn’t any song or remix in particular. Rather, the versatility of his drops throughout the set was what got me pumped the most, and it was a gift that kept on giving. Although he took care to ensure that his buildups varied, the drops were equally and wonderfully nasty.

The diversity of today’s lineup went far beyond my expectations, which were high to begin with. Tomorrow my coverage will include Dropkick Murphys, Portugal. the Man, 2 Chainz, the xx, The Postal Service, and Benny Benassi, so check back and see what day two has waiting in the wings. Infected Mushroom crowd from the outskirts Infected Mushroom crowd from the front Jurassic 5 – (from left to right) Chali 2na, Mark 7even, and Zaakir Jurassic 5 crowd holding up their fists