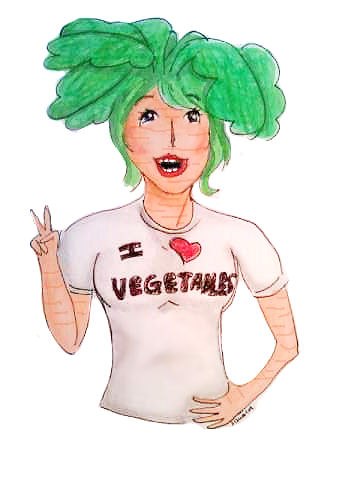 The average college student’s diet is infamous for being packed full of cheap and oily food—greasy pepperoni pizza and chicken flavored Cup-o-Noodles. But an increasing number of students seem to be ditching meat and dairy in favor of a more plant-based diet. The shift is even evident in Texas, where the University of North Texas opened the all-vegan “Mean Greens” cafeteria last-year, the first of its kind in the United States.

At the University of California, Santa Barbara, with the dining commons offering “Meatless Mondays” and the like, the number of herbivores seems to be increasing as more students learn about not only the ethical reasons behind veggie-based diets, but also the health benefits and environmental reasons.

Why Go for the Greens?

“The atrocious environmental externalities of these industries are something that I do not support and I do not want to be putting my own resources into that industry,” said Liddie. “I am very much involved in the global climate justice movement and I feel like it would be contradictory of me to be this really active grassroots activist and still be supporting industries that have such a huge negative impact on the environment.”

According to the Food and Agriculture Organization, “Ranching-induced deforestation is one of the main causes of loss of some unique plant and animal species in the tropical rainforests of Central and South America as well as carbon release in the atmosphere.”

Globally, livestock and poultry contribute both indirectly and directly to a significant amount of anthropogenic carbon dioxide and methane emissions.

If the environmental impacts aren’t enough for you to ditch your buffalo wings, the footage from any slaughterhouse would make even the most fervent beef-lover wince. The Farm Animal Rights Movement (F.A.R.M.) works to spread the importance of a vegan diet. Stationed outside of Davidson library last week, they offered one dollar to anyone who would watch four minutes of footage from slaughterhouses around the country, bombarding the viewer with the graphic truth behind the chicken sandwich they just ate for lunch.

According to the F.A.R.M. brochure, “Each year, 10 billion land animals—and even more aquatic animals—are killed for food in the US. Every one of these animals is a unique individual, just as sentient (capable of reasoning) and capable of feeling pain, sorrow, joy, and affection as our companion dog or cat.”

While paying people a dollar to cringe guiltily at the industries they support every time they buy groceries may be a questionable method, the graphic truth behind meat and animal-products is a reality that cannot be denied.

Although it may seem easy enough to eat vegetarian—order a cheese pizza, or pick the chicken out of your salad—many students blanche at the idea of giving up their favorite ice-cream or forgoing most cookies and baked goods. Luckily enough, with the Isla Vista Food Co-op right next door, and vegetarian and vegan options available at every meal served in the dining commons, the transition from omnivore to herbivore is a relatively easy one. Trading in Domino’s pizza for an earth-friendlier option also doesn’t have to break the bank.

As Deli manager and In-House Nutrition Educator at the IV Food Co-op Madia Jamgochian explains, “If you are a vegetarian or vegan, you may want to stock up on some of the many beans, grains, and nuts we offer in the bulk section to ensure an adequate daily dose of protein. When you are in a rush, or don’t feel like cooking, our deli provides a wide array of meatless and dairy-free options.”

Alternatives for animal products are also widely available. Can’t live without your yogurt or your cereal in the morning? Try soy yogurt, and cereal with almond or coconut milk—both with the same amount of calcium as cow’s milk, but without the unethical practices of the animal industry. Vegan baking is easy with substitutions such as applesauce in place of eggs, and soy-based margarines for butter.

“Don’t think that you’re limited to tofu and almond milk, because there’s so much more to veganism than that! I was recently exploring other options for cheese and I found that if you grate tofu and mix it with nutritional yeast and salt and pepper it actually taste a lot like cheese,” explains Liddie.

If you try a vegan lifestyle, chances are, you’ll raise a few eyebrows. From your friends who may suddenly feel awkward as they eat a cheeseburger next to you, or to the others who roll their eyes and denounce your new diet as “just a phase,” there is quite a large reaction from those who have not made the switch. Perhaps the biggest point of contention is the myth of lack of protein in vegan diets; however, soybeans, mushrooms, broccoli, and nuts offer great protein, and kale and almond milks have an abundant amount of calcium, far different from the calorie-packed grease of a standard take-out pepperoni pizza.

“Veganism really is a personal choice and while I would totally advocate it, I wouldn’t push this decision on anyone else,” says Liddie. Veggies may only be a side-dish for right now, but next trip to the grocery story, try to choose products that are not only delicious, but good for you, the animals, and the earth.