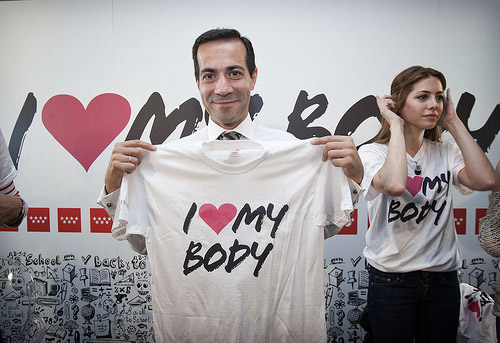 The eating disorders bulimia and anorexia were brought to students’ attention this past week as the University of California, Santa Barbara organization Active Minds coordinated the campus’ National Eating Disorders Awareness Week. Active Minds handed out fliers and pamphlets about eating disorders, held a dorm night on Feb. 27, and screened the HBO documentary “Thin” to increase awareness of the illnesses’ prevalence and to help reduce the stigma surrounding the diseases.

“I think we have a beautiful campus,” said Sok. “Everybody’s good looking and it adds a lot of pressure to just being here, and it can add a lot of pressure to girls, guys—anyone who doesn’t feel good about themselves. We all thought it would be important to spread awareness about this because it’s generally something that goes unspoken of.”

“Our culture, as do many others, promotes the thin ideal for women and the ripped, buffed ideal for men,” said Reynolds. “The ability to lay down muscle is determined by your genetic, just as height, eye color, hair color are. In addition, students who are accepted to university are generally high achieving and stress out a lot; they have to be in order to get into college, having participated in sports, extracurricular activities, great grades, etc. to get in. Our culture encourages people to ignore their internal needs in order to achieve.”

Ignoring natural needs and restrictions is one of the key indicators for eating disorders and, as evidenced by those shown in the HBO “Thin” documentary, can be one of the hardest hurdles for some to overcome. While in Florida at the Renfrew Treatment Center for women with eating disorders, anorexia sufferer Polly Williams explained the event that led her to seek treatment.

“I came to Renfrew after a suicide attempt over two pieces of pizza.” said Williams. “That was obviously not the whole reason why I tried to kill myself. That was just kind of the straw that broke the camel’s back I guess…I was counting calories and counting fat by the time I was 11.”

For many, the disorders become such a part of their life that it eventually takes it, as one in seven women with anorexia will die from it. Renfrew patient Alisa Williams explained how, in the midst of her bulimia, she took death as an acceptable consequence if it meant she would be at her ideal weight.

“I remember,” said Williams, “at one point thinking years ago, ‘so be it.’ I mean, this is what I really want. This is the one thing that I want so bad. I just want to be thin. So if it takes dying to get there, so be it. at least I’ll get there.”

While anorexia and bulimia gain the most attention, they are not, in fact, the most common. Most people with eating disorders share characteristics with anorexics and bulimics but do not have a key component, like someone who meets all the criteria for anorexia but has a regular menstrual cycles or someone who purges without binging. People with these and other symptoms fall under the category of eating disorders not otherwise specified and Reynolds states that EDNOS affect 25 percent of males and 32 percent of females. Despite the large percentage of people affected with these illnesses, many people suffering from them do not believe they’re as serious as anorexia or bulimia. UCSB Student Health said this is not the case.

“Individuals with EDNOS who are losing weight and restricting their caloric intake,” states Student Health, “often report the same fears and obsessions as patients with anorexia.  They may be overly driven to be thin, have very disturbed body image, restrict their caloric intake to unnatural and unhealthy limits, and may eventually suffer the same psychological, physiological, and social consequences as those with anorexia.”

For those suffering from EDNOS, anorexia, or bulimia, or who believe they know someone suffering from these diseases, Student Health has an eating disorder consulting team. There are also Social Workers and therapists at the Counseling Services who can help. For those in the dorms, Resident Assistants can be contacted for help as well.

“Reach out,” said Reynolds. “You are not alone. There are many people who have completely overcome this problem. Don’t wait.”