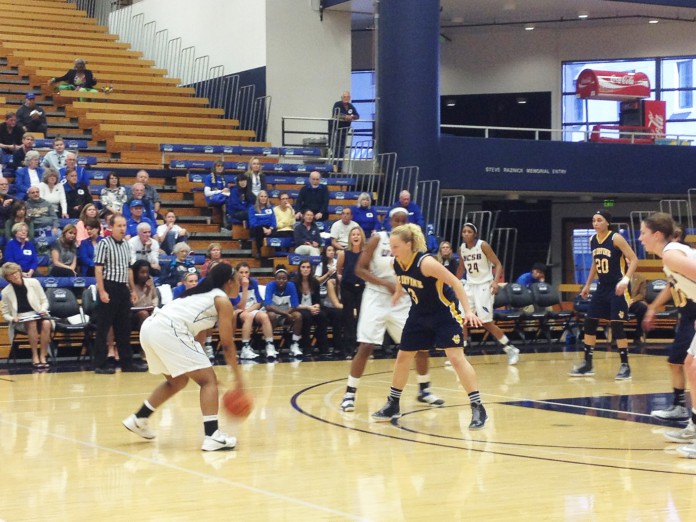 The win marks the lady Gauchos’ third win in a row and puts the team in good position to make a similar run to that of last year’s magical tournament triumph in which the Gauchos won the Big West Tournament as a sixth seed and punched a well-deserved ticket into the big dance of March Madness. The win also makes the Gauchos .500 on the year with a 15-15 record overall and an 11-7 record in the Big West Conference.

The Gauchos and the Anteaters slugged it out in an intensely defensive matchup. The leading scorer for the Gauchos was third-year guard Nicole Nesbit, who scored 17 points, but the real magic of the night came from graduating seniors. Sweets Underwood, Kirsten Tilleman, and Angelei Aguirre graced the court in the Thunderdome for their last time as players. Fittingly, the first three players to score for the Gauchos were these graduating seniors and, in her last game playing in the Thunderdome, fourth-year forward Sweets Underwood accounted for 12 points and 7 rebounds.

“We play well for some reason when our backs are up against the wall,” said Underwood. “We know how to respond to that and it’s just for us, if we make a mistake it’s just the next play no matter if it’s 59 seconds left or if it’s 30 seconds left on the clock. We know that we will give it our all in order to get that win.”

The Gauchos outshot the Anteaters 40.4 percent to 23.1 percent in the field, but the reasons that the team pulled off the victory were timely rebounds, superb defensive stops, and the sheer desire to leave their seniors with a victory on senior day.

“At the end of the day I don’t want to get emotional, but I held Sweets’ hand walking in here,” said Coach Mitchell. “That’s the first time she got to hold my hand where I wasn’t yelling and screaming at her and it’s nice for the seniors to go out on their home court. I told them before the game started, that we still have a lot of basketball left, but this is a day where the community, the fans, their teammates can show their appreciation for what they, the seniors, have meant to this program…I want them to enjoy this day. It’s a special day. I know it’s one I will never forget.”

Now the Gauchos have the Big West Tournament in front of them where they will be heading into the tournament as the fourth seed and as stated previously, the team won the tournament last year as just the sixth seed.

“Players and coaching staff at this point are all on the same page, but you always want to win your last one and your last one just happened to be Senior Day for us,” said Coach Mitchell. “We haven’t really worried about the record up to this point because now what we understand is that we are zero and zero. Your next game is your last game and so these kids will know that every night we are backed into a corner and that’s how we will have to play—game by game.”

The Woman’s Big West Tournament this year will feature a double bye format, which means that the Gauchos will automatically advance to the quarter finals where they will await the highest winning seed left from seeds five through eight in the tournament. This game will commence on Wednesday, March 13, in Irvine.

For more information on following the tournament check out http://www.bigwest.org/sports/wbball/.