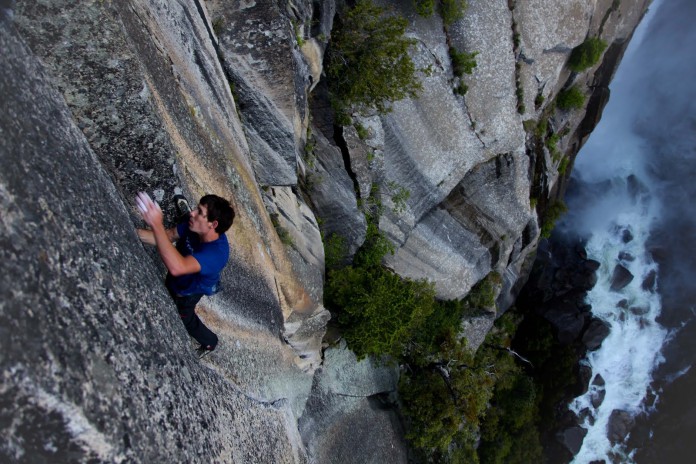 Sure, you can watch your fair share of action-packed videos on YouTube, but your laptop won’t send the same deep chills down your spine as those felt by crowds at the Arlington Theatre on Feb. 28. The large screen in the theater provided an element of suspense and intensity unrivaled by any Macbook as audience members viewed Swiss basejumper Géraldine Fasnacht backflip off a hot air balloon into the pearly clouds above the Alps on camera.

The viewing was part of the 37th annual Banff Mountain Film Festival, which was on Feb. 27 and 28 as part of the University of California, Santa Barbara’s Arts & Lectures Series. The event, held in the Arlington Theatre in Santa Barbara, featured an otherworldly lineup of extreme sports land films and was sold out on both nights.

In its 22nd year in Santa Barbara, the Banff festival speaks to the traveler and thrill seeker’s soul. Showing a total of 15 films ranging from two to 44 minutes long, Banff’s lineup exceeded expectations by highlighting films that tell stories of humans carving their own paths in the wild, mountainous, and uninhabited parts of the world. More brief stories included “On Thin Sea Ice 2” on Feb. 27, which starred half-naked director and producer Tor Eckhoff. Through a mixture of vodka and lunacy, he was able to slide over, dive through, and revel in the ice-covered lakes of Norway, and his escapades had audiences roaring. Eckhoff’s story was eclipsed by that of the two Australians whose goal was to be the first to cross the 1,140 km to the South Pole from Antarctica and back in “Crossing the Ice.” Best friends James “Cas” Castrission and Justin “Jonesey” Jones made the journey, chronicling their own intimate mental and physical struggles the whole way, including excruciating hunger, rashy genitalia, and oozing pus from their toes.

The Banff festival epitomized its international breadth with its feature of “The First Afghan Ski Challenge,” the product of importing Swiss ski instructors into the untouched mountains of Afghanistan to instigate a friendly competition. Hilarious, inspirational, and thought-provoking, the film captured both the descents of first-time Afghan skiers and unidentified army helicopters with poignant sensitivity. Night one’s closing film was “Reel Rock 7: Honnold 3.0” featuring free solo climbing phenom Alex Honnold. Honnold’s daring approach to climbing means no ropes and no safety net, which kept viewers on the edges of their seats and prompted an eruption of applause at the film’s culmination.

A Banff film fest newbie, I didn’t expect night two to be much different from the first. Missing out on a seat after arriving all of two minutes late, my skepticism clearly came back to bite me. As mentioned beforehand, “One Step Beyond” is a profound look at the journey of mountain-obsessed Fasnacht through death, injury, and doubt. No sooner is she telling you about how her boyfriend died in her arms, than she is jumping off a cliff in a body parachute. Filmed frolicking through snow-packed woods, the movie emphasized the sensitivity and unrelenting determination of a popular daredevil.

Night two closed out with Mikey Schaefer and Fitz Cahall’s “The Gimp Monkeys,” an eight-minute story of three handicapped rock climbers making the ascent of Yosemite’s El Capitan. In a phone interview, director Fitz Cahall said that the film “is one of the coolest things I’ve seen in all the stories I’ve filmed…their disabilities really never get in their way.”

Cahall said he aimed to capture how the nervousness and excitement of DeMartino, who climbed alongside Pete Davis (who was born without an arm) and Jarem Frye (who lost his left leg to bone cancer at 14), reminded him of the first time he himself made the El Capitan ascent.

“You don’t need to be a rockclimber to be inspired by their story,” he said, adding, “I wanted to make something even my grandmother would like.” As cheers and applause reverberated off the walls of the Arlington at the film’s close, it was clear that Santa Barbara was moved and inspired. I’m sure his grandmother didn’t think it was too bad either.