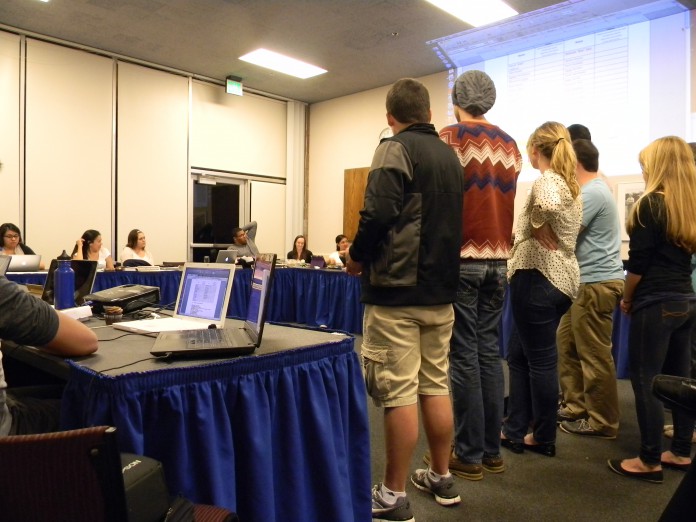 Members of the College Republicans spoke at the Associated Students Senate Meeting on Wednesday, Feb. 27, in opposition to the resolution that had been passed the week before entitled “A Resolution Condemning Social Network Pages That Misrepresent the University.”

The group’s main argument against the resolution was that it prevented free speech, a right given under the First Amendment. They claimed that the resolution would cause censorship of the pages, which neither university-affiliated groups nor university officials are allowed to do. AS maintains that the pages present derogatory information, often involving race and sex, and misrepresent the university.

“We are a university that cherishes freedom of speech, that cherishes various views,” said College Republicans President Chris Babadjanian. “I think that by us censoring something for ethical and moral values, even though this is a very sensitive issue here, we are sending a message to other states and all the other universities across the country, that they themselves might find ethical and moral reasons to use censorship and I just think that is wrong.”

In addition, the group believes that while the some of the content on the pages is theoretically harmful, which is AS’s reason for the resolution, they disagree that censoring the pages is a good way to stop rape culture and slut shaming.

“I think that we are lying to ourselves by saying that we are going to create a safer environment by taking this off the web or changing the name,” said Babadjanian. “I don’t think that censorship is the way to do this. If anything, I believe the more [visibility], the better. Because like those signs on the bike path, it opened peoples’ eyes.”

College Republicans’ main argument against the resolution is that there is no empirical evidence stating that people have been harmed due to the sites and their content.

“If we are going to begin censorship on theoretical reasons, what’s stopping AS in the future from finding reasons to do more censorship, to block more things?” said Babadjanian. “I would completely be for censorship if there was actual empirical evidence that these types of things promote sexual violence and if there is empirical evidence that if we did change the name from ‘UCSB’ to ‘Isla Vista’ that we would prevent sexual, racial, and abled crimes.”

However, many students showed up to the meeting as well in support of the resolution, and addressed Senate saying that they were affected negatively by the content on the pages.

“As a survivor of sexual assault, the things that I see on this page that come up on my feed, those are harmful to me,” said Human Rights Board Outreach Coordinator Will Ellis. “If they want empirical evidence, that is some evidence that it is harmful to me.”

Ellis included that he does not “like” the pages, but that they still appear on his newsfeed due to other people “liking” them and commenting on them.

College Republicans believes their stance on the resolution is bipartisan, as the First Amendment affects everyone equally.

“This is not a College Republicans issue, we just feel like we need someone to stand up because it is setting a precedent of censorship and we don’t approve of that,” said Executive Director of College Republicans Sara Callahan, a fourth-year film and media studies major. “The point of the First Amendment is to protect unpopular speech…As a member of a club whose right to speech has been threatened before, I wanted to make the point that you can’t stifle the minority voice just because you don’t want to hear it. In fact, those are the voices the first amendment was especially written for.”

However, one student, Brandon Pineda, who is the co-chair of Student Commission on Racial Equality (SCORE), believes that Senate has the right to condemn these pages because of free speech, not despite it.

“We’re using our free speech to condemn this page and say that it does perpetuate the rape culture that UCSB is known for and that the perpetuation of culture and highlighting harassment does not reflect the university and community as a whole,” said Pineda. “Expressing concerns against these pages is completely justifiable considering that the privacy is violated considering that some folks can be tagged, therefore that is outing them and their experiences, so we want people to be protected and their privacy is violated in that aspect.”

In addition, another student, fourth-year Tilman Hayes, voiced his support for the resolution and cited three instances at other colleges where College Republicans and the Foundation for Individual Rights in Education (FIRE), which advocates for freedom of speech in universities and wrote an article against UCSB’s resolution, made charges for free speech that many considered hate speech. One of these instances involved a student getting kicked out of dorms at the University of New Hampshire for writing “women should take the stairs to lose weight.”

The UCSB College Republicans contacted FIRE regarding the debate. Shortly following, FIRE published an article condemning AS’s actions and defending students’ freedom of speech. The article explains, “The resolution does more than simply condemn the speech it finds offensive; it calls on the Senate staff and university administrators to attempt to influence Facebook to censor the pages. Censorship is not just morally wrong; at a public university like UCSB, it is unconstitutional.”

Despite the large amount of support and opposition toward the resolution, Senate did not discuss or change their stance on it. Associate Director for Community Affairs Aaron Jones announced that UCSB is not pursuing action against the Facebook pages, but said that those who still feel harmed or threatened by the pages should still make an effort to change them.

“Take it upon yourselves to do what you need to do,” said Jones.