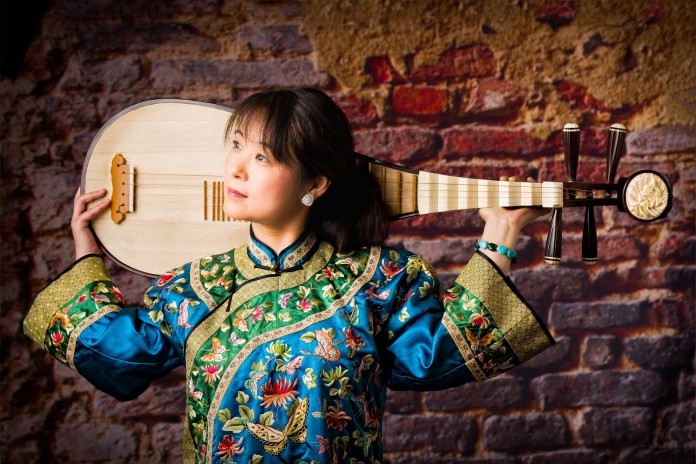 At the second to last stop of their tour, Grammy-Award nominated Wu Man and the innovative, New York-based orchestra The Knights gave a breathtaking, energetic, and colorful performance at University of California, Santa Barbara’s Campbell Hall on Feb. 23.

Wu Man is a composer, instructor, and soloist accredited as today’s leading figure for the pipa, or the ancient Chinese lute, as well as Chinese music. Not only was Wu Man nominated for a Grammy, she was also announced as the 2013 Instrumentalist of the Year, the first traditional musician to receive such an award by Musical America. She has collaborated and performed with major orchestras and artists around the world, especially in the United States and China, and chose to travel with The Knights this year. The Knights is a fresh, young group of classical musician friends known for their eclectic and vast array of styles and sounds.

Opening the program, which was put on by UCSB’s Arts & Lectures, the Knights painted the room in E-flat with their musically colorful performance of Stravinsky’s “Dumbarton Oaks.” With that, conductor of The Knights Eric Jacobson welcomed Wu Man to the stage as “the Wu-Man.”

With poise, Wu Man sat down and began to skillfully pluck her pipa with the Knights, beginning Lou Harrison’s “Concerta for Pipa and Strings.” Standing around her, the Knights combined the lute’s 2,000-year-old sharp, distinct sound with their mellow and harmonious strings and bows, creating a rich sound of two cultures and musical styles uniting. With only string instruments being played, Wu Man and The Knights made their fingers and arms dance while their instruments painted a story of suspense, surprise, peace, and passion. The orchestra played their violins like guitars at one point, mimicking the quick plucks of the lute, and Wu Man also strummed her pipa to create a soothing pallete of sound. Wu Man and Julia MacLaine also conversed in a duet as they by tapped their pipa and cello like a drum, to an off tempo yet danceable beat—to which they and some orchestra members exchanged smiles as if their jamming was some sort of secret.

The Knights then played Debussy’s “Prélude à l’après-midi d’un faune,” bringing in the wind instruments and debuting the flute, which was pleasantly performed by Alex Sopp. Darius Milhaud’s “Le Boeuf sur le toit,” or “The Ox on the Roof,” quickened the pace with its Brazilian roots. “Le Boeuf sur le toit” changed from animated melodies to languid tunes, which kept the audience on their toes with its unpredictable nature. The Knights performed with a modern twist, as they flirted with the classic renditions of the pieces and fused them with their own flavors and energies, always ending the songs with a dramatic bang and pose.

Man returned to the stage to perform her own compositions “Blue” and “Green,” two of her favorite colors that were inspired by her travels to China and a melody sung by her son when he was a child. She arranged the songs for pipa and orchestra and, once again, blended the folk tunes of China with Western and European melodies. Man and the Knights incorporated two worlds of color into one painting and the sounds of the percussion, wind instruments, string instruments, and Wu Man’s pipa were delightful and novel.

The energy and creativity of the performers made the fusion of Asian and European sounds a color of its own. The Knights and Man gave their respective musical specialties new meanings, as both parties played with passion, originality, and innovation. With the last and only hit of the gong, Man and the Knights thanked the audience—who responded with a standing ovation.