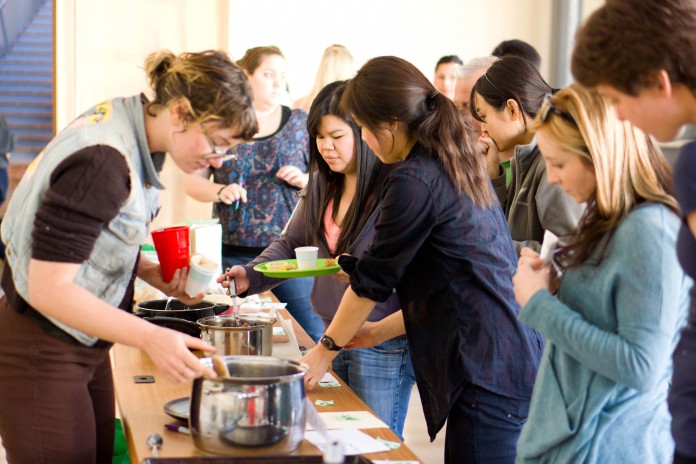 On Sunday, Feb. 24, students gathered at the Student Resources Building for the Environmental Affairs Board Green Chef Competition, a celebration of sustainable food and healthy, inventive cooking. The event gave participants the chance to be creative with their own cooking, while also featuring the base requirement of a secret ingredient that must be included in every dish. After a thorough judging by the competition’s attendees, five dishes total were chosen for the three categories of “most creative,” “most sustainable,” and “best tasting.”

The Green Chef Competition was first created in 2010 by the EAB, and has now gained recognition as a quarterly event.

Akoua Doffou, the chair of Sustainable Foods for the EAB, described the organization as “the largest environmental group on campus.” Their most recent effort includes lobbying to get Associated Students Senate to pass a resolution against University of California Regents’ fossil fuel divestments.

The Isla Vista Food Co-op plays a crucial role for both the organizational and creative aspect of the competition. They offer the EAB a wide range of options for the secret ingredient free of charge, and additionally serve as the place where many contestants go to buy other components of their dishes.

Doffou, a second-year undeclared major, described the mutually beneficial arrangement as “a symbiotic relationship; we get our ingredients from them, and they get publicity from us.”

Green Chef is intended to be easily accessible; anyone can enter their dish, sign up as a judge, or take on both sides of the competition. Signing up to judge costs $3 and allows unlimited sampling of every entry.

Doffou believes that the competition’s all-inclusive atmosphere is one aspect that draws people in.

“It gives you an Iron Chef kind of vibe,” she said. “A lot of people are really into cooking but have never entered a competition before, so this is their first chance. It attracts a wide demographic of people.”

As the main organizing force behind the event, Doffou has the job of planning the competition, a task that includes working with the Co-op to choose the main ingredient.

Once participants go to the Co-op to pick up this secret component, they are left to their own creative devices. On the day of the competition, the chefs bring their finished dishes for the judges to taste, complete with a placard that describes the dish, the names and the sources of the various ingredients. After tallying the votes, the winners are announced according to the three main categories.

The secret ingredient for the competition was blood oranges, a refreshing and tangy fruit that Doffou selected precisely because it isn’t commonly used.

“My friend and I made vegan and gluten-free blood-orange blueberry scones,” Ross said. “We got all the ingredients from the Co-op, so they were local and organic, and turned out delicious.”

The EAB co-chair of Sustainable Foods, Tessa Balboni, entered the competition and also helped to organize it. Like Ross, she also used the Co-op to her advantage when planning out her dish, blood orange bars with an almond crust.

“It wasn’t too hard to make, and it was fun,” Balboni explained. “I do enjoy cooking. [Sustainable food] is really easy to use in Isla Vista. I go to the Food Co-op in IV, and then everything is either local, or sustainable, or organic.”

The overarching purpose of EAB Green Chef, however, is not solely to decide who wins and who loses. Doffou divulged that the competition is really more focused on educating students about adopting healthy, organic eating habits and having fun with cooking. In the stressful environment of college life, it is all too easy to fall back on premade or microwaveable food that, while easy to make, is far from nutritious.

“Be aware that you can make really good things with fresh, organic, local produce. You can integrate this with your daily life,” Doffou advised. “We want to teach people that it’s possible to cook all organic and all locally grown ingredients.”