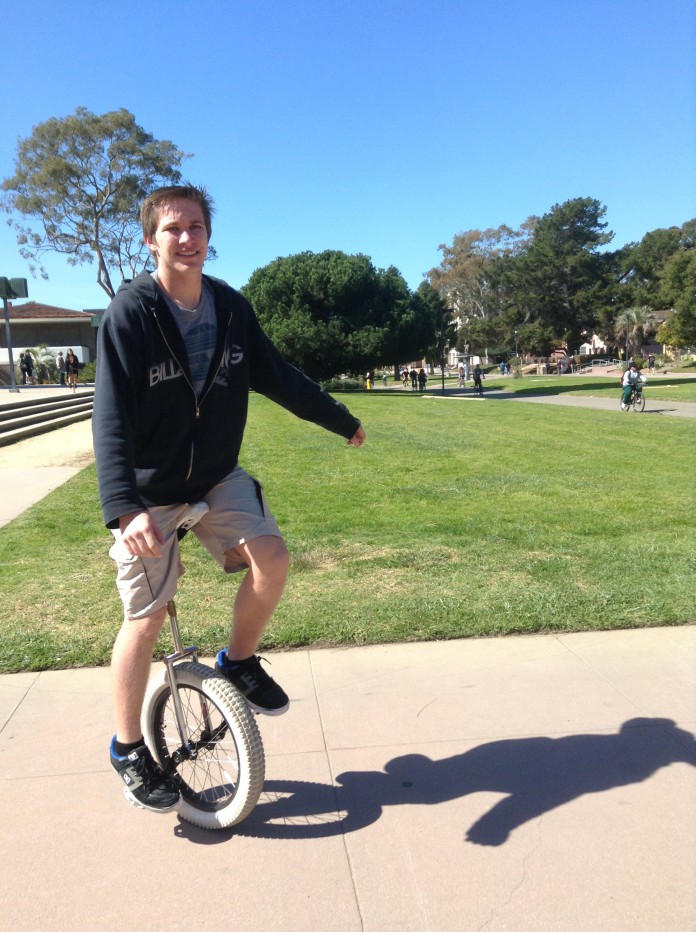 “Unicycling is not a crime,” said first-year psychology major Jackson Hranek after he was given a bicycling citation on Feb. 4 in front of the Arbor. Before he received that ticket, he was given a warning in front of the University Center by the same police officer. The officer stopped him and told him to get off the unicycle and told him that he was not allowed to ride in the pedestrian lane again. Hranek did not seriously consider the suggestion, and simply turned the corner and rode on his unicycle again. When he was unicycling near the Arbor one week later, the cop first gave him a warning to get off, but when the officer realized he gave Hranek a warning the prior week, he decided it to give him a citation.

“I understand that they want the campus to be safe, they weren’t being mean about it at all,” said Hranek.

While they were giving Hranek the citation, they kept referring to the unicycle as a “bicycle,” even though it clearly is not. The officer also gave him the rules and regulations pamphlet that they give to everyone else who gets a vehicle violation. They told him from now on, Hranek should ride his unicycle in the bicycle lane, and never in the skateboard lane, because a unicycle is not considered a skateboard. But when Hranek insisted that his unicycle would be too slow for the bike lane and that it would cause traffic, the officer said there was no other choice. The officer even said that there was a possibility that Hranek would get another citation for riding too slow. After this additional conflict, the officer simply suggested it would be best if he took his unicycle home and never brought it out again. Hranek decided the best thing to do would be to search what is really considered a “bicycle” and make sure his ticket was rightfully justified. After hours of research, he realized that the ticket was given in violation of two codes: Vehicle Code 467 and 231, one of which explains that a unicycle is not considered a bicycle because it doesn’t have gears.

Hranek decided to email Chancellor Henry Yang to explain what happened and see if the Chancellor could resolve the issue. Hranek explained that he feels like unicycles are not welcome on campus, and that there is nowhere that he can ride. He also emailed police department with the same issues. He managed to get a follow up meeting with Vice Chancellor Gene Lucas. Lucas researched the issue and organized a meeting with the rules and regulations board and Dustin Olson from the Police Department. Hranek told them that he didn’t want much, only the right to be able to ride his unicycle. He requested that they possibly make a stipulation to the rules on unicycles. They not only delegated Hranek as the expert on unicycles, but also said that he did not need to show up to court for his ticket. The ticket was voided and cleared, and now, a unicycle is considered a “skateboard” which can be ridden in the skateboard lane because it can do everything a skateboard could.

“If I didn’t do this, no one else would,” said Hranek, as he was worried that other unicycles would stop riding too.

“If there is a concern we want to know, and do whatever we can to change it,” said Lucas, who was in support of the whole ordeal.