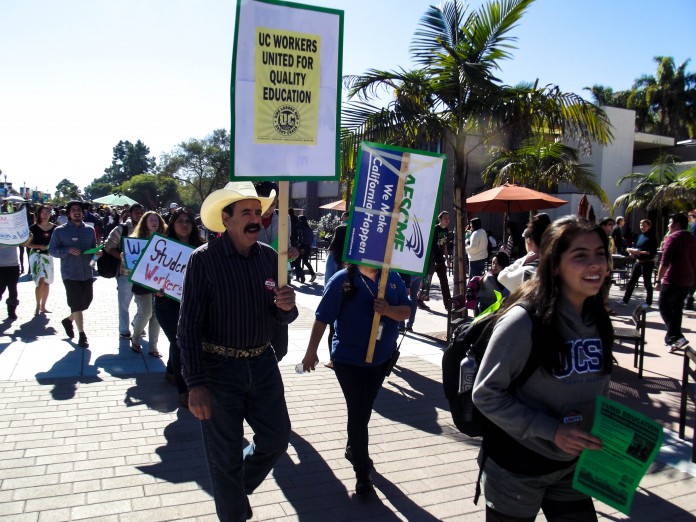 In front of the Arbor on Jan. 31, a coalition of University of California, Santa Barbara union workers and students organized a public demonstration against the UC Regents for their purportedly inequitable allocation of pension funds and benefits for executives. With many of the union contracts expired or set to expire, the service workers and wage earners that detail the campus have made a public statement that their limited earnings will not be on the chopping block.

Amid cries of “Si se puede!” and the recurring recitation of “Whose university? Our university!” a crowd of almost 75 workers, students, and community action members led a winding picket line protest that attracted the attention of passing students and faculty. For the majority of Latino workers, the protest represented a return of La Raza to UCSB, an assertion of not only the civic unity of the union coalition, but a confirmation of their social influence.

Vanessa Guzman, American Federation of State, County and Municipal Employees (AFSCME) representative at UCSB, led the protest with chants, and her opinion of the situation was less than favorable.

“Today was the last day of the service contract,” she said. “The Regents have not accepted any of our major proposals or included protective language in the contract for safe staffing, having breaks, wage raises…were coming out to show our dissatisfaction with the UC increasing executive pay and pension while tuition increases and service cuts continue.”

Guzman continued by indicating that the educational ideal of the UC system had gone astray.

“The UC system is being run more like a corporation than a university, even Governor Jerry Brown has indicated that the UCs should restrain the long-term expense of dramatically high pensions,” said Guzman.

Following the retirement of UC President Mark Yudof and the revelation that he would be receiving a $230,000 pension, the coalition of UC union workers—who customarily receive $18,000 pension after 20 years of service—believed this was the time to combat even further cuts to their livelihoods.

Calling loudly through the megaphone, Partida spoke out to the gathering crowd filling out the mall in front of Girvetz.

“Student worker’s solidarity on campus prove to the administration that we will not stop until we see results,” said Partida. “It’s about human dignity, its about respect, and we all understand that so we march together! Without the workers, without the students, the Regents would be out of a job.”

The central grievance of AFSCME and the union coalition is that executive excess has been funded by increases in student tuition, rising taxes, and dramatic cuts to the pensions and wages of UCSB service workers, some of whom have been employed at the university for 20 years or more. An excess of administrative staff and “golden handshakes”—the extravagant pension plan a departing UC executive receives upon his departure—have become the bane of wage earners and students who feel that higher-ups are not making acceptable sacrifices.

According to the Media Advisory press release for the protest, “management bloat and rising executive compensation”—with lifetime pensions to UC executives potentially reaching up to $541 million—is the key issue driving up tuition costs and forcing cuts to UC workers.

Rodney Orr, system-wide legislative and political director for the UC Professional and Technical Employees Union, indicated that it was crucial for the Regents to plan logically for the future and protect the living wages of its workers.

“The UC pension plan does not have any workers involved to protect their rights,” Orr said. “The UC Regents and executives make all the decisions in terms of allocation and investment for pensions. The primary goal of the protest is to ensure the protection of the workers.”

According to the rules of union negotiation, once a contract expires, and in lieu of an agreement between the two parties, the worker’s union transfers to a system called status quo, where the union gains the right to strike, but loses the ability of forced arbitration. In short, the unions must convince the Regents of their cause through local advocacy, coalition unity and the ability to protest.

“It’s difficult for a union to organize protests, but when all the contracts expire the possibility of a union-wide strike is possible,” said Orr.

Since the AFSCME contracts have yet to be renewed, this might not be the last time a union protest appears on the university campus. Though it could be said that the UC system and California are in dire straits economically, there seems to be a polar disagreement about where the remaining funds should be allocated, and also as to where new money can be unearthed. The potential for a serious clash is looming if the Regents do not acknowledge the points of obvious financial disparity that the protest hopes to bring to light. If AFSCME and the union coalition have anything to say about it, the money won’t be coming from the pockets of service workers, cash-strapped families, or conscious student advocates.