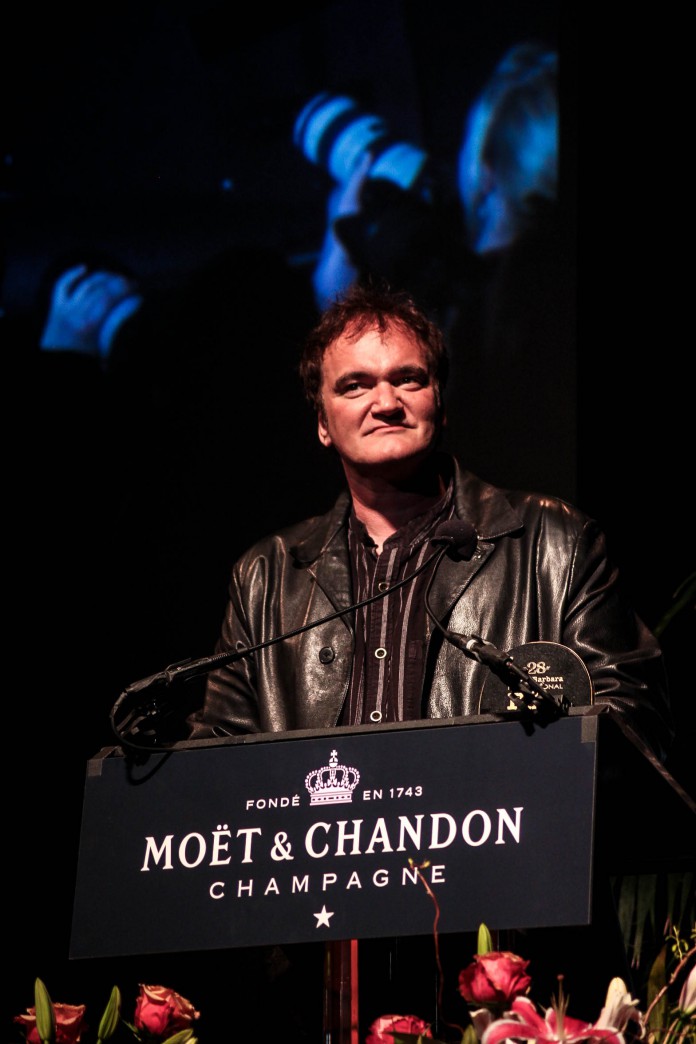 Saturation. Nonlinear scenes. Racial epithets. Stylistic music choice. These are the signature qualities you will find in the films of only one director: Quentin Tarantino. And to no surprise, the Santa Barbara International Film Festival chose to celebrate Tarantino’s contributions to film with the Riviera Award at the Arlington Theater on Jan. 30.

Tarantino is known for his controversial content and unique scene sequences in his films like “Pulp Fiction,” “Inglorious Basterds,” and his most recent and critically acclaimed, Oscar-nominated film “Django Unchained.”  But aside from the fame and recognition, Tarantino seems to be the antithesis of a Hollywood director.

Unlike most award ceremonies at SBIFF, there was no red carpet event—an ironic turn of events that went hand in hand with Tarantino’s unconventional and quirky self. Tarantino, dressed in blue jeans, a wrinkled button-down shirt and leather jacket, humbly entered the theater as if he, too, was a guest.

After the opening ceremony, Tarantino was welcomed to the stage by Los Angeles Times film critic John Horn.

“I’m rather taken aback; I didn’t know this was such a big deal,” said Tarantino, while looking out to the audience. After watching several pairs of scenes from his films, Tarantino said, “You know, just for the record, I am loving watching these films.” But still, Tarantino did grace the audience with his humor, clever comparisons, and even abrupt interruption—in the words of Tarantino, “I really really have to take a piss. Someone take me to the bathroom.”

Horn did not hesitate to delve into asking Tarantino about his writing process.

“It’s funny, I never took any writing classes, I took acting classes,” Tarantino said. Although his humble origins in the film industry were as an actor, he quickly moved on to screenwriting, which to him, feels like “writing a novel.” Tarantino expressed himself as two people—a screenwriter and a director, who both handle the writing process, script, and directing completely separately.

“It’s not just a blueprint,” said Tarantino, in regard to writing a script (which he does only by hand), “it’s about expressing myself artistically. It works like literature.”

Tarantino expressed that he writes for himself, and doesn’t assume that he will turn his scripts into a motion picture or anticipate how a story could turn out on film. “I write stuff where sometimes I don’t have a fucking clue how I’m gonna do it. And part of the process is figuring it out.”

Tarantino’s tendency to push the boundaries of set genres was another point of interest—from martial arts to World War II to Western. Working in a particular genre and creating a story and a particular character all come into play for Tarantino while writing a screenplay.

“Genre actually keeps me disciplined,” said Tarantino. However, he made it clear that “I work in genre. It’s all about delivering the goods.”

After completing the writing process, Tarantino explained his process of shooting scenes in a given film, and shared how to tell whether or not a scene is working.

“If it’s not working, it’s pretty easy. However, if it is working, I do tend to go long, so I have to be really aware of, ‘is this holding up, can this be this long?’” Tarantino used the particular basement sequence in “Inglorious Basterds” as a prime example of a long running scene.

“The basement scene in the movie, I mean, deep in the fucking movie, there’s no Aldo, no Shoshanna, there’s nobody you know—a bunch of motherfuckers you just met. And now all of a sudden, they’re in a 40-minute scene. That’s supposed to be suspenseful.” In addition to his long scenes, Tarantino also admitted that “my problem is not writer’s block, my problem is I can’t stop writing.”

Tarantino’s tendency to use the same actors in a number of his films was brought to light when asked about his relationship with Samuel Jackson.

“Sam said the dialogue so perfectly, I ended up writing it for him,” said Tarantino when asked about whether or not he writes dialogue with a particular actor in mind. “Sam Jackson is a terrific writer in character.” Tarantino also mentioned that while writing “Kill Bill Vol.1,” “half of the stuff that Uma said to me, I ended up putting in the script. It’s her words regurgitated back to her in this genre of a story.”

Before the ceremony came to a close and SBIFF Director Roger Durling presented the Riviera award to Tarantino, Horn asked Tarantino what was the best advice he received and learned about writing.