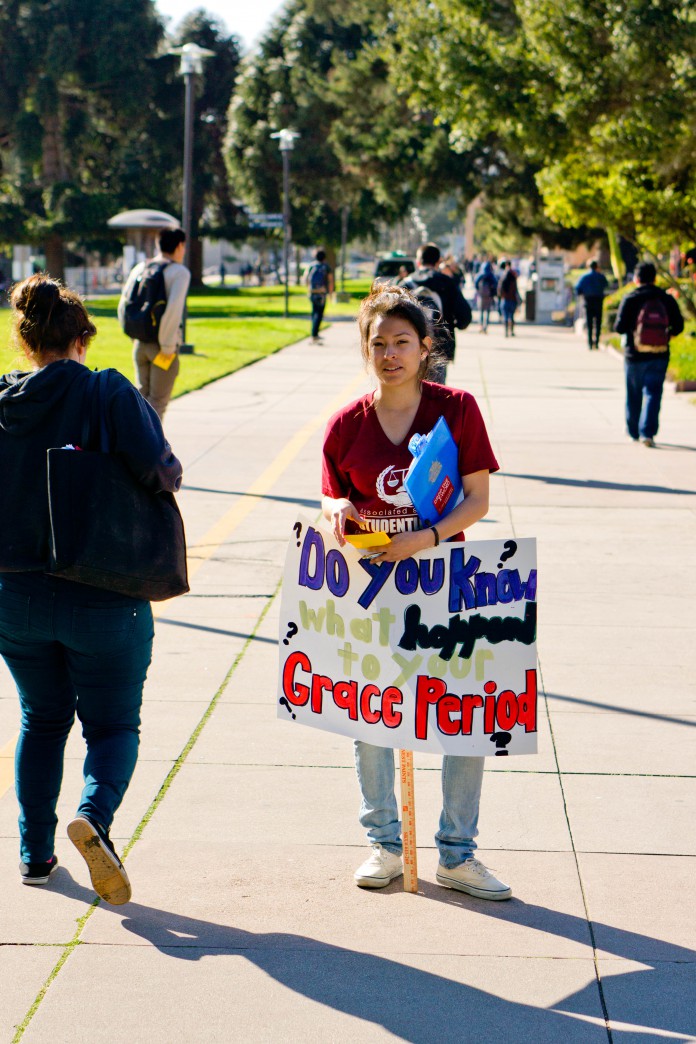 Associate Students Student Lobby organized a rally at University of California, Santa Barbara to raise awareness and protest the changes in federal student loans’ policy that were made effective July 1, 2012. The rally began in front of the Arbor on Tuesday, Feb. 12, and grew in number as students marched to the steps of Storke Tower. The legislation temporary suspended the interest rate government subsidy during the post-loan “grace period,” which allows interest rates to accrue in the six months following the end of a loan. Students still do not have to make payments until after this period, but they will be responsible for the accrued interest.

“In order to keep the interest rate from doubling they did this, which still doesn’t fix the problem,” said Associated Students Issues Coordinator, Maria Flores who organized the rally on behalf of AS Student Lobby. Flores, a third-year global studies major, and other students waved signs and yelled, “Are you a part of the elite who can afford to stay silent?”

Fifteen minutes into the rally, an unidentified professor demanded that Flores stop using the megaphone. When she continued using it, he yelled “Shut Up!” took the megaphone away, and returned to his classroom in Girvetz Hall.

At the rally, AS Student Lobby released a petition for students to sign in order to support a resolution in the AS Senate.

“We want to raise support to reinstate something that was already there,” Flores said of the potential for the resolution to fight for the return of the previous grace period. The idea for a resolution was that of Mia Summers, a third-year global studies major and member of the AS Senate, who was present at the rally.

“It’s ridiculous that we should have to pay these loans right out of school, when it’s already hard enough to get a job,” said Summers. She said that AS Senate looks to see what other schools are doing to fight this legislation in order to develop an inter-university movement.

Alongside Flores and Summers was Lupe Zelada, a third-year global studies major and a member of AS Student Lobby who said that there has been no major reaction to suspension because

“This all happened in July when everyone was out of school. Nobody was there to fight against it,” said Zelada.

Congress drafted the legislation in time to prevent subsidized federal student loan interest rates, now at 3.4 percent, from doubling to 6.8 percent until next year. The suspension is set to expire July 1, 2014.

“What we see now in terms of anything really being positive is just like a band-aid to a gunshot wound… it’s like celebrating more of the same,” said Miguel Albarran, a fifth-year sociology and Latin American studies double major.

“I’ve taken out loans personally. It affects everyone’s future and my future if I want to go to grad school,” sadi Sasha Llamas, a fourth-year Spanish major. Also effective July 1, 2012, all subsidized student loans are no longer going to be available for graduate and professional students, meaning that graduate students, not the government, pay the interest that accrues on their loans while they are in school.