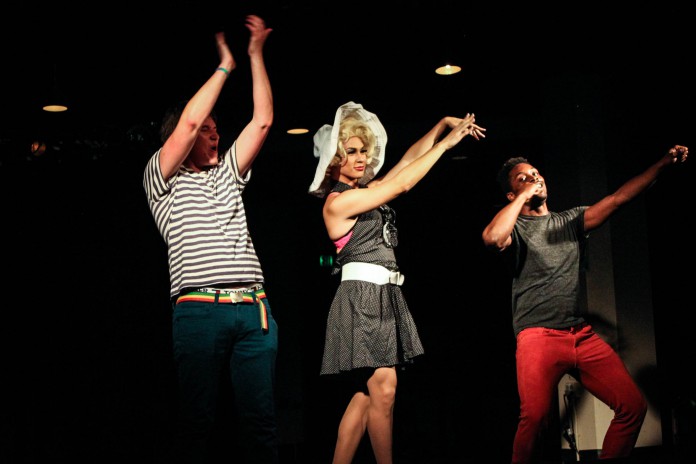 A troupe of drag queens and one drag king took over the Hub stage on Jan. 31, with sass and witty one-liners in tow. Stiletto heels clacked against the floor. False eyes lashes got caught in blonde wigs and press-on nails disappeared among the crowd. To quote the 1996 film “The Birdcage,” “This may be a drag show, but it still has to be a good drag show, if possible a great drag show.” Indeed, the Queer Student Union, with their production of a Winter Wonder-Drag, most certainly brought a great drag show and entertained over 150 students in the underbelly of the University Center.

Heterosexuals, bisexuals, gays, lesbians, transexuals, and all other degrees of sexual identity crowded their way into the Hub, circling themselves around the front of the stage. Though the production, in true drag queen drama fashion, began a little bit behind schedule, the audience didn’t appear to mind, eagerly hollering at drag queens meandering around the stage. Once the music stopped and the lights shifted, roars of glee filled the packed venue and a show filled with swaying hips, syncing-lips, and a whole lot of attitude took over the night.

The WRCC unites people from across the West coast to discuss the issues the LGBTQ community faces.

“We’re going to raise so much money for our Western Regionals, which we’re taking almost 50 people to free of charge,” Aiello said.

The decision to charge for tickets, while helping to ease Western Regionals fears, put extra pressure on the performers and those coordinating the event.

The pressure certainly paid off. Drag queens (and king) Jenna Scyde, Avery Daniels, Sugar Box, Justin Bieber 2.0, and several others shook what their mothers gave them and lit up the stage with their confidence, sincerity, and dedication not only to their performances, but also to the community they represent.

Aiello said the drag show serves a key role by helping to unite the queer community, particularly in the face of the prejudice and hatred still present in the Isla Vista community.

“I feel like a drag show in general is a sort of honoring of our community,” said Aiello, “because it kind of reflects on the fact that maybe we are a little different, but we accept it and we want to display it to our community. So I feel like having one gives a lot of support even though there have been times in IV where there have been…where we haven’t had the support.”

The opinions of others had no effect on the show, however, as performer in the show and QSU Publicity Coordinator Nick Newton clearly demonstrated with his quick comebacks, wit, and ever-shortening skirts.

“I’m so excited,” said Newton before the show, tossing faux blonde tresses from his eyes. “I waited so long for this event to take place. I’m excited.”

Newton’s enthusiasm shined through his performance and continued through the rest of the show, which concluded with a stunning and energetic performance from Jenna Scyde.

“The show was awesome. Our community has some awesome drag queens,” said Chris Buck, a first-year economics major. “We really showed that our community is a family and we can express ourselves in a safe, open place.”

With the exception of a few lost eyes lashes, a couple broken nails, and some slightly tilted wigs, the drag show veterans of Santa Barbara proved they still have, and always will have, what it takes to be fabulous.