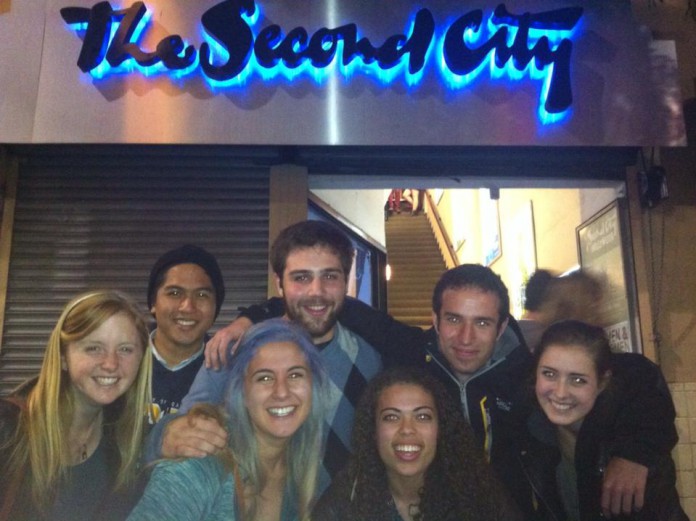 A new breed of comedian takes center stage every Sunday night at University of California, Santa Barbara’s Studio Theater. Sketch ‘n’ Sniff, the newest improv group on the UCSB campus, uses stories, audience input, and cultural references to leave their audiences laughing and begging for more. The group’s members range from theater to economic majors and include all level of undergraduates, proving that age has no effect on comedic talent.

Coming to life only eight years ago in 2005, the relatively young group said they’ve changed a lot since their humble beginnings.

“It was called Sketch ‘n’ Sniff because we did sniffs, which are basically, you get a word and then you write a sketch about it, and then they would put on the sketch,” said Philip Lindsey, one of the group members. “So we’d do improv and also sketches at the same time.”

The decision to move away from the sketches allowed the troupe the chance to perfect their long form improv, a skill they’ve nearly mastered. The members move seamlessly between each other, picking up each others’ sentences and movements, in a flow one usually expects from siblings. The hours of practice have certainly made a difference and bonded the troupe together, uniting them into a group that’s more than willing to subject themselves to silliness on stage.

For many of the members, their interest in the troupe began after seeing a performance.

“I saw the shows,” said Mariah Goolbsy, “and I like that Sketch ‘n’ Sniff, we do a lot of long form improv which is less of the quick witted games and more of our long scenes…and being in the BFA (Bachelor of Fine Arts program) and acting every day, I feel more comfortable with that.”

The games Sketch ‘n Sniff play challenge the group to be quick-witted and simultaneously continue to make a scene funny through several minutes of story building. One game, “Survivor,” opened up the sport-themed show on Feb. 10 as four members interacted in a scene, each getting ‘kicked off’ until only one was left to be each actor. It was similar to expecting one actor to play Romeo, Juliet, Tybalt, and Mercutio at the same time.

Other games, like “Oscar Winning Moment,” “Next Choice,” and ‘”Slideshow” continued to prove over and over that despite being a smaller and lesser known presence on campus, the troupe can certainly hold their own.

The connection and friendship between the members of the troupe shined through not only on stage, but off. Whether it was before the show as they warmed up, during as they laughed and climbed over each other, or afterwards as they seemed to share the same thought while talking, the Sketch ‘n’ Sniff troupe has a very clear camaraderie.

It wasn’t uncommon for the group to finish off each other’s sentences, as Goolsby and Paulette Zubata were quick to demonstrate.

“We do a one act,” began Goolsby, explaining her favorite game, “that’s like Sketch ‘n’ Sniff’s-”

“It is. It’s Sketch ‘n’ Sniff’s house drink,” concluded Goolsby. “We create a one act play on the spot…I really like the fact that we can come up with a full story line and do a bunch of scenes that connect and have a beginning, middle, and end. I think it’s one of my favorite things that we do.”

The long form, more storytelling aspect contrasts with Improvability’s quick response and fast pace, but the troupe assures there’s no ill will between the two. They encourage students to attend both performances to test “their flavor.”

Sketch ‘n’ Sniff performers have the energy to rival professional comedians, and the quick imagination expected of story tellers seeps through their words and actions. The combination of each member’s unique talents ensures that the collective group flows together effortlessly, each scene forming into a coherent and hilarious performance. When one comedian appears to be losing their place, another quickly steps in.

Overall, Sketch ‘n’ Sniff is a budding new improv group with all the potential to rise to standards recognizant of the famous show “Whose Line Is It Anyway?”

Sketch ‘n’ Sniff will be holding auditions Feb. 26 at 10 p.m. outside Studio Theatre. Anyone interested in auditioning or curious about troupe can find updates at Facebook.com/sketchimprov.