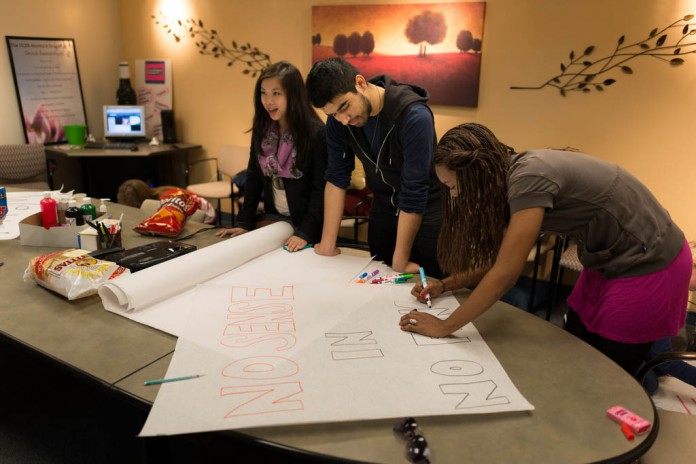 On Feb. 1, University of California, Santa Barbara students met on the second floor of Embarcadero Hall, home of UCSB’s Alcohol & Drug Program, to initiate a rally for fences along the Isla Vista cliffs at Walter Capps’ Memorial Park. The students spent one hour making posters, and then rallied to the park, located on the 6700 block of Del Playa Drive.

Signs read, “Be careful of the cliff,” “We want a fence,” “We all need to contribute,” and “This is a community effort!” Rhandy Siordia, UCSB Associated Students External Vice President for Local Affairs, and Life of the Party, a student organization that promotes alternatives to the Isla Vista party scene, headed the initiative.

“We want to raise awareness about the danger of cliff falls,” said Siordia.

Attention was brought to the issue of cliff falls in November when the body of 21-year old David Propp was found at the foot of the IV cliffs near the 6500 block of Del Playa Drive. Authorities later determined that Propp’s injuries were consistent with an 80-foot fall. Propp was the fourth reported fall since Aug. 2012. However, the previous falls were not fatal.Cliff falls are not a new phenomenon in Isla Vista. In March of 2001, a partygoer fell from the cliffs while attending a party at a Del Playa Drive apartment complex. In response, much of Del Playa Drive was lined with fences except Walter Capps’ Memorial Park, which remains the only park without a fence.Jamie White, a fourth year psychology major and advocate, was particularly passionate about the event.

“We want to get attention from the county to put up a fence,” said White.

The county maintains Walter Capps’ Memorial Park. The campaigning students hope the county will find it in the interest of the community to put up a fence, despite the question of funding for the project.

“We hope we won’t have to dip into students fees for this,” Siordia said.

The danger of cliff falls is an issue unique to the UCSB and Isla Vista Community. “There is not an existing model in place for a campaign like this. It is a learning process,” said Siordia.

The rally did not attract much attention from passersby but once at the park, the protesting students took pictures and answered questions from both UCSB and local media. After some discussion on the issue, the rallying students parted ways.

When asked about the role of alcohol and drugs in these tragedies, the rallying students acknowledged that alcohol and drugs are a serious problem among college-age students that needs to be addressed continuously and in the long-term.

“We certainly want people to be safe when drinking,” said Siordia.

“We want to positively impact the community and prevent other dangers,” she said.

The rally was just the beginning of several events to raise awareness for the dangers of cliff falls. Later that evening, just hours after the rally, the aforementioned student organization, The Life of the Party, organized and led a candlelit vigil to Walter Capps’ Memorial Park to mourn the recent deaths that have plagued the UCSB and Isla Vista community.