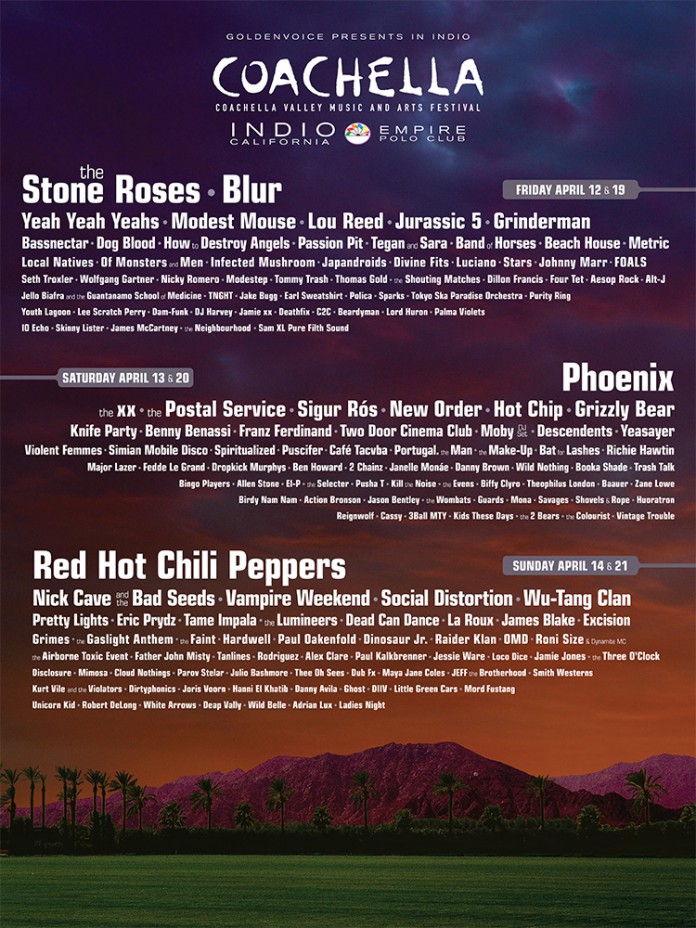 The anticipation for eager Coachella fans is finally over. With the lineup being released weeks after expected, it is no wonder that every single music fanatic around the world was blowing up the Coachella message boards and social networks—me being one of them. When it was finally released, it was just a relief that we no longer had to deal with one of those fake hopeful lineups or Rolling Stone rumors.

The lineup for the 2013 Coachella Valley Music and Arts Festival was released Jan. 22, 2013, to the overwhelmingly ecstatic thousands of music lovers. This year’s lineup is stacked—no matter what your know-it-all friends, who don’t like “obscure hipster scenes,” are posting on their twitter updates. I highly suggest marking off April 12 to 15 on your calendars.

That being said, it is no surprise that the popular music festival’s first weekend sold out within eight minutes of tickets going on sale, and the entire festival sold out in less than 24 hours.

On first glance, the lineup feels like a letdown, at least in the opinion of someone who would have loved a David Bowie, Smiths, and Rolling Stones headlining trio. And, of course, there’s no Daft Punk, a rumor that pops up every year. But the Stone Roses reunion will be an event to see, and any festival with New Order, Wu-Tang Clan, and The XX can’t be all bad.

Although the headlining artists are not as immediately captivating as the past years ones have been, I think the smaller-font bands are the ones that make a remarkable statement this year. With some of my favorite bands being among them, such as Tame Impala, Foals, Beach House, Purity Ring, Two Door Cinema Club, Local Natives, Wild Nothing, James Blake, and Youth Lagoon, Coachella will still live up to its undeniable reputation.

“Instead of bashing on the Coachella lineup people should look up the artist they don’t know and open up their minds a bit to something new,” said Noelle Diaz, a second-year psychology major. After deeming last year’s music and camping venture to the palm desserts of Indio, California, as the best weekend of my life, I did not hesitate a single minute to pre-order a full weekend package, knowing the popularity of the event only continues to grow with time. Yet the question still arises, is Coachella getting old? Are teens just buying tickets to “fit in” and be a part of what everyone else seems to drop hundreds of dollars on?

Having an obsession with concerts, I think that there is no way such an uplifting, joyous festival could get “old” if you’re there to enjoy the musical getaway with friends. Last year, with the inclusion of the Tupac hologram as a special guest, the quality of the festival spoke for itself.

“A lot of the people that get tickets nowadays just get them because they think Coachella is the cool thing to do,” said second-year sociology major Kevin Sanchez. So maybe the question isn’t if Coachella is getting old, but instead, are the festival-goers making it old?

There are plenty of other music festivals you could go attend each year—Lollapalooza, Electric Daisy Carnival, Bonnaroo, Paid Dues, or The Governor’s Ball—but if you’re looking for the biggest gathering of critically acclaimed contemporary artists in the world, look no further than Coachella. What started out as an annual two-day event has evolved into two three-day weekends in one year.

What makes Coachella so special? The fact that you can travel to the middle of the desert while still in CA boundaries in order to camp out your best buds and jam to your favorite bands, all in on place. But there’s always a catch. Coachella also happens to be one of the more expensive festivals to attend. A weekend pass, which will give attendees access to all of the more than 100 bands playing, will run at $349—if you can get one. Otherwise you’re stuck stalking craigslist for a $700 ticket, and that’s if you’re lucky. Either way, if you get the opportunity to go, do it. It will be a memory that will last you a lifetime.

Out of Senseless Tragedy Came Personal Growth and the True Face...