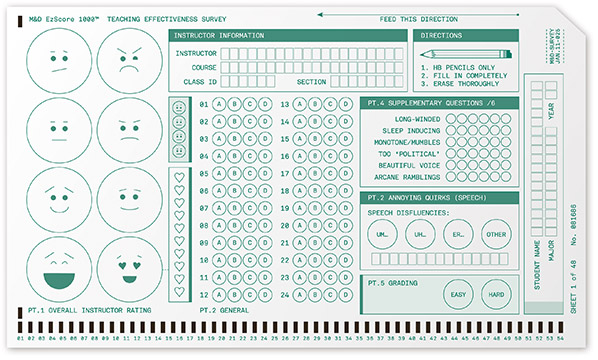 Around midterms, I always feel like cursing my professors’ lack of teaching skills because I feel I haven’t learned anything all quarter. Then I go around screaming, “who hired these people?!” and insist that I could do a better job than them (to which people smile and nod as though they are dealing with a delusional person who just escaped the nearest asylum).

But really, who hired these people? Why are some of these professors some of the worst lecturers that I have ever encountered? If I thought my high school French teacher was atrocious and generally scarring, I’ve met some professors who have blown that terribleness out of the water. I’ve also met some phenomenal professors who probably changed the direction of my education altogether with their enthusiasm and brilliance. But for every wonderful professor, there’s an awful one. Honestly, if I were in charge of the hiring process, the educators at University of California, Santa Barbara, would be very different. Shouldn’t students get a say in who their professors are?

Well, in a nutshell, no. No, no, no. Also, no. My resounding “no” comes despite the fact that after a few disastrous classes and overwhelming stress at the ambiguity of an entire course syllabus, and lectures that were impossible for me to stay awake in, most of the professors that I have met here are genius.

Professors obviously get hired for their qualities and capabilities that are beyond the scope of education. Terrible lecturer? It could mean that they have stage fright (they’re professors, not Beyoncé). Maybe they’re more interested in tinkering around in a lab or reading a book than they are in teaching a bunch of students who wait until the night before a paper is due to bullshit it while drinking Red Bull and Five Hour Energy simultaneously (I’m hardly trying to bash on us brilliant students, but let’s be real). But though some professors are not too interested in going to lecture (they’re on the same page as us half the time), they are extremely interested in what they are teaching us.

They share with us their lives’ work, their babies, and there is probably nobody else more qualified than them. I went to visit a communication professor during his office hours to ask him one or two questions for an article, and walked out of there an hour and a half later. He absolutely loved that I went to go visit him and answered all my questions. He was so enthusiastic, showing me his research, lecture notes and everything pertinent. They love their work, and a boring professor on the stage is often energetic and thought provoking in his office during a one-on-one meeting.

Since UCSB is a research university, the primary motivation behind a professor’s employment is what they will bring to the table academically. Will they produce novel research? Publish illuminating papers? Bring us funding with their brilliance? Whether or not they can entertain students in front of a lecture hall is often secondary. I’ve had some extremely entertaining professors whose enthusiasm for the subject is itself a song and dance routine to keep me wide eyed and bushy tailed during some 8 a.m. classes. I’ve also had some boring professors who put me to sleep at 2 p.m., when I’m wide awake. It doesn’t really matter, as long as they know what they’re doing (research-wise), which they almost always do.

Let’s also think about what would happen if students were to be part of the hiring process. We’d have to take into account over 25,000 voices for the hiring of a professor. We’d analyze their charisma and maybe not notice they don’t have as many qualifications to boot. It’s just not feasible to incorporate the opinions of an entire student body, especially when most of them are not knowledgeable about the professor’s research. They have to be the best, because we only want the best.

So hopefully, your midterms are now over, and life is going on as it did before. Be thankful that we have geniuses as professors, and bask in the sunlight that is their radiating brilliance. Love them and all they have to offer. Until finals.