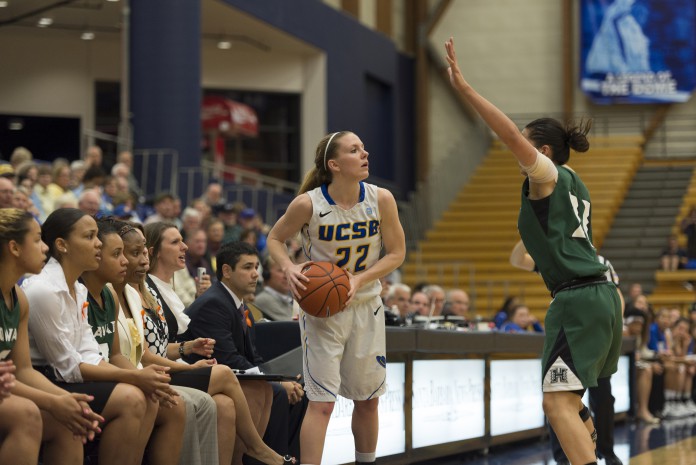 The University of California, Santa Barbara Women’s basketball team played the University of Hawaii on the night of Thursday, Feb. 21. The Gauchos lost to the Rainbow Wahine (54-51) in an extremely tight game that came down to the wire and a missed buzzer beater shot. The Gauchos are now 7-6 in the Big West conference and 11-14 overall.

The Rainbow Wahines were led by scorer Kamilah Martin. Martin was held in check with just two points in the first half due to the superb defense of fourth-year forward Sweets Underwood and fourth-year center Kirsten Tilleman. The second half was a completely different story, as Martin scored 12 points, adding to her total of 14 points and eight rebounds altogether.

The Gauchos were led by Underwood with 16 points and five rebounds, and third-year guard Nicole Nesbit with 15 points. The Gauchos came to play and actually outshot the Rainbow Wahines 47.2 percent to 41.9 percent, but Hawaii outshot UCSB from the three-point line as well as from the free throw one, which proved to be the difference.  The intense grind it out game ended with a last second three point prayer from the hands of third-year guard, Melissa Zornig.

“I am extremely proud of the way we came out to play after a disappointing game two days ago,” said Head Coach Carlene Mitchell. “I think our kids were extremely focused this week in practice. It’s that time of year when a lot of different things are going on and you can either go one way or the other way. Of course I’m disappointed. I always expect to win. It was a game we could have won. You know it’s never the last shot. So I don’t worry about that. Mel will understand that. There are a lot of things that happened. Again I can always live with it; I don’t have that edge when I go to sleep knowing that we left everything we had on the court.”

“It was a really good, exciting game,” commented pep band member and fourth-year German and biology double major Jeff Carter. “I am disappointed with the result, but I thought we played really hard. It’s getting down to the wire. How we do in these last few games is going to affect how we are seeded in the Big West tournament, and this is the same team that went to the NCAA tournament last year and came out of nowhere. So I’m expecting good things out of them for the Big West Tournament and I’m hoping they can go all the way.”

The Gauchos are still in fourth place in the Big West Conference and only have five more games left to improve their seed for the tournament.  Their next game will be this Saturday, Feb. 23, against California State University, Northridge.