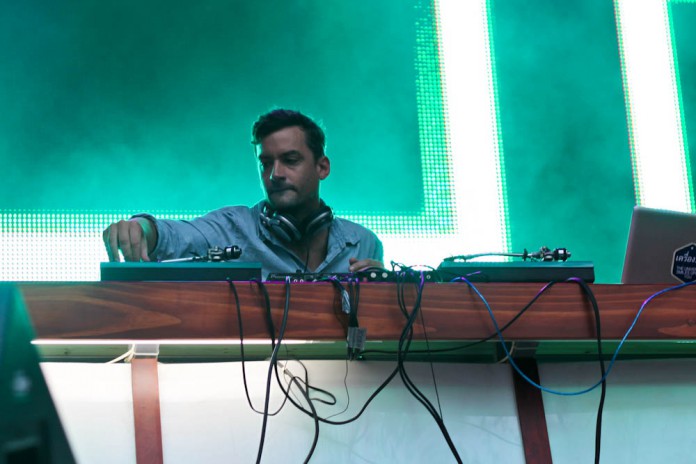 His stage name may refer to a chimpanzee, but British musician and DJ Bonobo was more like a melodious chameleon when he performed his DJ set at University of California, Santa Barbara on Feb. 22. The event, which took place in the Hub, was put on by UCSB’s Associated Students Program Board and, by the end of the night, was filled with attendees who flocked to see the acclaimed performer.

Water Signs, a band comprised of Dylan Chase, Kris Pitzek, Kyle McKay, and Alexandra Dwight, took the stage around 9:15 and played five songs that opened the show and set the ambience for the night. Formed spontaneously only a couple of weeks earlier, the band’s members fused elements from their personal side projects to create a unified presence.

“We’re flying high,” Chase said in regard to opening for Bonobo. “We formed the band with this show in mind.”

Influences of Bonobo’s music were evident in Water Signs’ set, which was laden with synth chords, moving guitar lines, and deep bass beats. The band’s opening song evoked imagery of moving water that echoed the band’s nomenclature, but took a while to settle into a solid rhythm that was based off of interplay between Chase (on synth) and Pitzek (on drums). Considering the brief length of the band’s existence, though, they maintained an overall cohesiveness apart from that discrepancy and other minor rhythmic hiccups throughout the set. The chemistry exuded from the group was also a pleasant surprise, given the brevity of their time together. Although different members were featured throughout the set, such as McKay with his guitar melodies and Dwight and her sultry, crooning vocals, the individual elements never detracted from the group’s coalescence.

The highly anticipated man of the hour slipped onstage around 9:45 to the cheers of the audience, and commenced his 90-minute set with pulsing beats reminiscent of a rapid heartbeat layered against a string melody.  He quickly transitioned into a play off of his renowned song “Black Sands” from his 2010 album with the same name, before finally speaking for the first time to the audience.

“What’s up, Santa Barbara? This is my first time in this part of California, and you guys are amazing,” he said, eliciting a fervent reaction from the audience before delving head-first into his DJ set that sampled music from the Joe Cuba song “Do You Feel It?” The excerpt he sampled, “I feel the pressure that keeps us down…gotta get away,” was appropriate for the evening, as Bonobo’s blend of his signature downtempo style with high-energy, afro-beat cadences and jazzy accents defied any pressure to adhere to traditional musical paradigms.

Bonobo’s set, which played off of music from his older projects as well as his upcoming album, “The North Borders,” was anything but linear. Arguably, it was this quality that enticed concertgoers who reveled in the ambiguous nature of the performance. Seemingly spontaneous electronic beeps punctuated ambient tempos; an established groove suddenly transitioned into one featuring interjections of saxophones and trumpets. This disjuncture, however, did not create a sense of dissonance. In true displays of his skill as a DJ, Bonobo executed these transitions with seamless ease, facilitating an aurally unconventional ebb and flow.

The set was also distinguished by Bonobo’s method of building up to a musical meridian; whereas many well-known DJs quickly escalate and hit listeners with a pronounced, bass-heavy drop, Bonobo erred on the side of subtlety and preferred to incorporate understated deliveries. The rise was considerably more gradual, and culminated in drops that were discernible, but not overwhelming. Such a style, while not as common in the mainstream American DJ circle, was refreshing to experience and complemented the more relaxed essence of the set.

“We like having different genres [perform]; we have a diverse amount of students so we try to cater to that,” Rachel Glago, one of the ASPB Publicity Coordinators, said in regard to Bonobo’s idiomatic style.

The word “diverse” clearly applies to Bonobo’s style as well. “Downtempo electronica is what we were given to describe him,” Geo Coelho, another ASPB Publicity Coordinator, said. But Coelho also noted that applying a specific genre to Bonobo was difficult, and part of the appeal of his music.

Although Bonobo didn’t humor chants from the audience to play an encore, his performance was still well received by attendees of the show.

“His DJ set was a lot different from his normal music,” said Ian Wikle, a second-year chemistry major. “It showed his diversity and shows that he’s appealing to different crowds.”

Anthony Gonzalez, a 2010 UCSB alumnus who majored in pharmacology and returned to his alma mater for the show, expressed similar sentiments.

“I saw them [Bonobo and his band] in Hollywood; there was a full band and horns. He flipped the other side of the coin for his DJ set tonight, and it was fantastic,” Gonzalez said. “It was transcendental. You’re lucky enough to experience one side of the coin, and I got to experience both.”