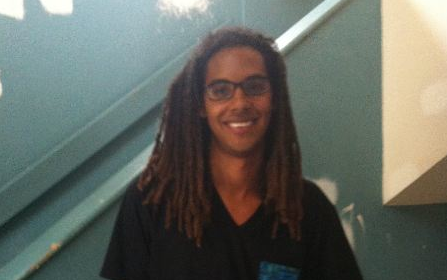 On Thursday, Jan. 31, third-year UCSB student Tyler Robinson (known by his DJ name Sarthe) won the Santa Barbara Red Bull DJ Master competition, which pit Robinson against eight of his student peers in a two round battle for a residency at EOS Lounge downtown and a huge bump in notoriety.

Q: What made you first start DJing?
A: It’s kind of a combination of two things. I’ve always loved music; it’s always been a passion of mine. I listen to music when I do anything. And then when I was in about tenth grade, my brother was in his freshman year here [at UC Santa Barbara], and growing up he was my role model. When he started DJing he taught me, and he gave me his first MIDI controller, which was this $200 thing that was glitchy as hell but easy to learn on. I started out slow with that.

Q: What’s your favorite part about DJing?
A: My favorite part is being able to choose what songs I want to hear and adjusting them to how I want to hear them. It’s not about hearing the original song; it’s about changing it up, adding new lyrics or mixing it in with another song. I love seeing how everyone reacts, just making sure everyone is having a good time. I like to make sure the crowd is going wild.

Q: How did it feel to win the DJ battle on Thursday?
A: Exhilarating. I was kind of freaking out, actually. I was just excited to be in the finals, because in the first round with the other nine DJs moving on was mostly based on how many friends you brought to the battle, and most of my friends were sick. After the battle, though, my friend who I was competing against called me up and said “Congratulations, we’re in the finals together.” To win the whole thing was just the best feeling, just knowing that I won a competition against nine other guys that are extremely talented.

Q: What do you think is the next step after this victory?
A: The next step is definitely to try and get my own original music out there. I’ve been working on it a lot, and I want to finish some things I need to get refined but I know will be awesome tracks. Right now I’m just trying to keep going and do more and more shows downtown just to get my name out there, but the next step is definitely to get my own music out there and promote it as much as possible.

Q: If you could give one piece of advice to someone who wants to start being a DJ, what would you tell them?
A: I would say start by listening to other DJs, because observing is a part of learning. Then, just put in a lot of practice before you play your first show. You have to get good at mixing songs together and reading the crowd, especially at house parties in Isla Vista, because that’s a completely different vibe than you get in a club. You can throw in Blink-182 or Sum 41 and people go crazy because it’s a throwback, but you have to be able to feel that from the crowd and make sure everyone is having the best time possible.