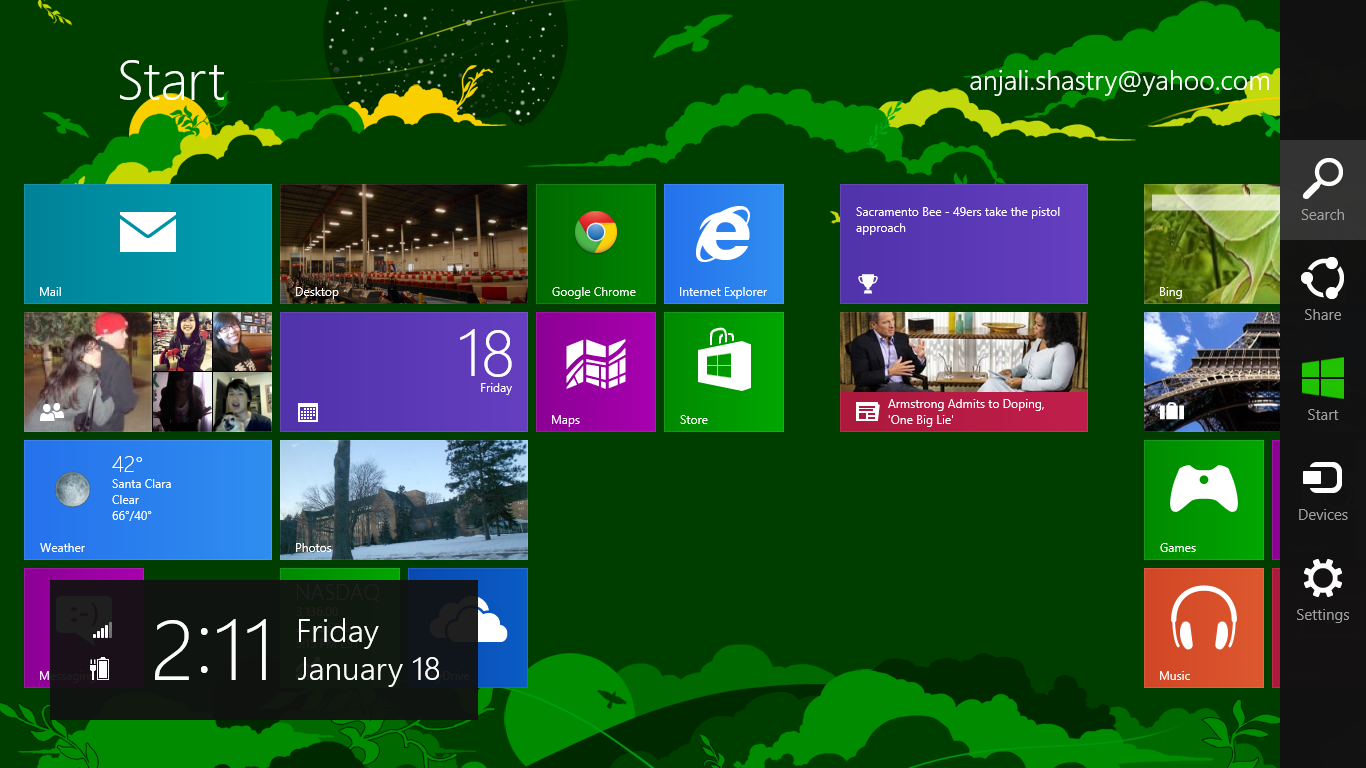 At the end of last quarter, my laptop suffered a slow and agonizing death by drowning. It was stupidity on my part, but I got a new computer out of it (huzzah!). I was thrilled when I found out my new computer would have Windows 8, because all the advertisements between episodes of my “Castle” marathon made the new interface look super exciting!

Those advertisements are misleading.

Windows 8 is one of those interfaces that look really cool on advertisements, but appears to be designed more with touchscreen laptops in mind. I am running Windows 8 on a 4 GB Pentium processor Acer that is trying to support Windows 8 and isn’t doing all that great a job. In the era of instant gratification, I don’t want to wait 30 seconds on the clock for an app to load when I could wait 2 seconds, and Windows 8 is supposedly pretty speedy. I imagine Windows 8 would be more exciting on an i7 processor that could actually support it and run it more efficiently.

Processors aside, Windows 8 is surprisingly complicated to operate. For example, it suffers from a bulky Start page. The computer boots up to this Start page, which is a page of solid colored blocks called “tiles” that are shortcuts to apps, websites, and programs. There are a bunch of preloaded apps, like “Maps” and “People” and my personal favorite, “Store,” where you can buy more apps and tiles to put on your Start page. There are also other like “newsXpresso” and “Ebay” and “Chacha,” none of which do anything the Internet couldn’t already do. People is an interesting app; it allows you to sync your Skype, Twitter, Facebook, Google, Hotmail, and Outlook accounts all to this one app that will have all the people in your life and the various ways to contact them all in one place.  However, the apps are a bit annoying, and can slow down the computer.

“Windows 8 is very visually appealing, but I prefer the old version because I’m used to it and it worked just fine for me,” said April Scatliffe, second-year communication major.

Once you’re on the start page, there is a tile that allows you to click on the desktop. The desktop is a function of Windows 7 that is maintained in Windows 8.

“The tiles are a cool concept, but even on a touchscreen laptop, they are bulky and childish,” said first-year computer engineering major Matthew Ruth of the tiles and desktop. “But I do like that they still have the desktop of Windows 7. I thought they would get rid of it altogether.”

The desktop functions much like the desktop of Windows 7, but there is no Start button in the left hand corner. Instead, you slide your mouse over the left hand corner and a picture of tiles pops up so that you can click into the Start page. It’s certainly more effective with the touchscreen laptops.

If you slide your mouse over the upper left hand corner, then slide down, you can see what other apps and programs you have open at any given time. The apps that are not on the desktop don’t open on the desktop, which means you cannot access them at the same time unless you click and drag them to either side of the screen and drop it down so you can have two apps open at the same time. It isn’t as complicated as it sounds when you get the hang of it.

“Windows 8 is not intuitive at all, and using it takes a bit of learning,” said Breann Guzman, a second-year political science major. “That’s weird because I thought it was supposed to be easy to use.”

Unfortunately, it took me a while to get the hang of it too. I myself spent a fair amount of time on the Windows 8 website learning how to use Internet Explorer 10 (the default browser of Windows 8) and how to open up different apps at once.

If you scroll to the right hand corners of the screen, a directory of Search, Share, Devices, Settings, and a Start button appear. To search the computer for an app, file, program, or website pinned to the Start page, you have to click on Search which takes you away from the desktop and into the Start menu for your search. In Windows 7, you didn’t have to leave the desktop and whatever file you had open, so it is a bit irritating. Some of the functions of Windows 8 are such a departure from Windows 7 that it doesn’t make sense to me.

I agreed with third-year environmental studies major Matt Manabat’s assessment that “it is trying too hard to look like an Apple Operating System. Many people choose Windows over Apple because they aren’t interested in their interface. That was certainly the case for me.”

On the other hand, the Start page resembles the Xbox dashboard, according to second-year economics and accounting major Alex Markovich. “The two pages look pretty much identical,” said Markovich, “which makes sense because the Xbox comes from Microsoft, too. Maybe they are trying to sync up the systems, so it’d be easier for a Windows 8 user to cross over to Xbox, and thus open up a new market.”

No matter the reasoning behind the new system, the interface itself provokes my irritability. As a technophobe who just wants to use Word sometimes to write my papers, and the Internet to spend my life on Tumblr and Facebook, I don’t find this new supposedly user-friendly interface, well, user-friendly.

Nicholas Kawazoe, a fourth-year economics and accounting major, summed it up perfectly when he exclaimed, “I don’t like change!”