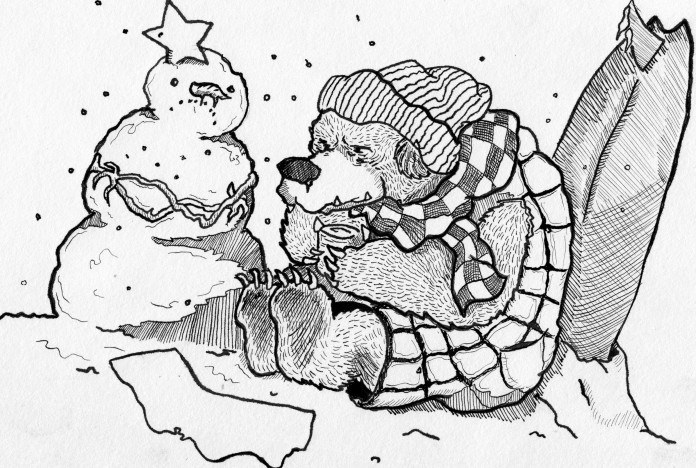 “The average global temperature in 2012 was among the 10 hottest since official record keeping began in 1880,” said Neela Banerjee, energy and environment reporter for the Los Angeles Times. However, in contrast to the world’s extreme warm weather, Southern California has recently experienced subfreezing temperatures affecting fresh produce and people’s risk for disease.

The cold climates have affected thousands of acres of avocados, strawberries, and citrus plants, and farmers have had to keep wind machines running to remove the frost, according to The Santa Barbara Independent.

“When the weather gets that cold, the avocados fall to the floor and the leaves turn brown. It [cold weather] completely damages the new crops,” Mery Marquez, produce specialist at Rancho Santa Cecilia. Lolita Lopez, reporter for NBC, also claims that freezing temperatures can destroy fruit even before they are ready to be taken off the trees. Not only can cold winds destroy the plants of thousands of farms, but the cold weather will decrease in the amount of avocados available, leading to an increase in their price. Moreover, on Jan. 14 meteorologist David Sweet with the National Weather Service reported a reading of 27 degrees, breaking a 24-year-old record.

Even though 2012 was one of the hottest years recorded, the world has simultaneously been exposed to extreme cold climates that have negatively affected people’s health. Experts on climate change have claimed that the abrupt weather changes can be attributed to global warming.

“The report shows that global warming may have a wide variety of severe impacts on Southern Californians including more storms, winter rainfall, and in increase in respiratory illness due to excess smog,” stated the Environmental Defense Fund on their website, edf.org. Dr. Janine Bloomfield, Environmental Defense senior scientist claimed on the EDF that, “heavy storms, intense heat, and smoggy skies could become more common, more severe and more damaging unless action is taken now.”

The cold weather does not seem unusual for some students and staff at the University of California, Santa Barbara, but for others, the winter season is becoming colder and colder every year. Mary Ferris, UCSB Campus Physician & Student Health Executive Director, recently sent out an email to all students urging them to get the flu shot in response to the spreading influenza across campus. While the flu epidemic is normal this time of year, colder temperatures could have caused the epidemic spread faster.

“I have no interest in getting out of bed in the morning because it’s so cold outside,” said Daniel Riboh, a third-year biopsychology major at UCSB. Other students like Riboh who don’t have the urge to leave their warm bed in the morning also find it difficult to commute around campus during the night.

“When I know I have to go to the library to study at night, I never end up leaving because it’s not worth the bike ride,” said Lauren Jacob, a junior sociology major at UCSB. The cold weather can especially be dangerous for people living in Santa Barbara because, according to The Pasadena Star News, a cold, low-pressure weather system is combining with high tides to increase the danger of flooding along the California coast. While the freezing temperatures are unavoidable, students and staff can actively make efforts to do their part in reducing the effects of global warming and protecting the environment.