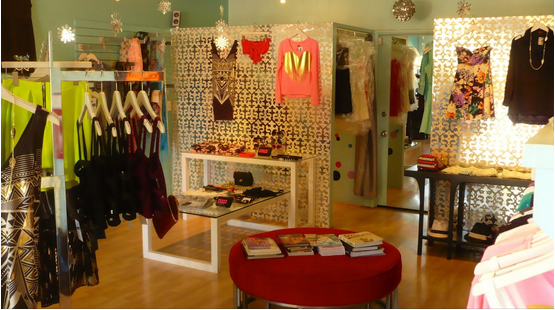 The retail landscape of Isla Vista is in the wake of a massive wave of changes.

Out is Chinos; in is Angry Wings. Out are the remains of Isla Vista Surf Company; in is Chase Bank. And perhaps the most discernable change—the swanky new housing options of ICON, The Loop, and The Plaza Lofts, which spearhead IV’s visual transformation from aging, rickety beach town to contemporary, commercial gold mine.

Despite the changes that led to IV’s new skyline, some eateries and shops aren’t going anywhere.

Freebirds continues to be the envy of burrito joints around the county, consistently attracting late-night weekend crowds out the door and a steady enough customer base at all hours to remain open 24 hours a day. The Isla Vista Food Co-op recently proved its place as an IV staple by successfully raising over $200,000 to own its property, due in part to efforts of over 1,000 individual participants in a crowdsourcing fund, according to the Co-op’s Facebook page.

Miss Behavin’ is another modern IV staple. Nestled above Bagel Café on the 6500 block of Trigo Road, the boutique will be celebrating its seventh anniversary of selling trendy women’s clothing this year.

The only business in IV with a focus on dresses, outfits, accessories, and jewelry, Miss Behavin’ was founded to bring fashion-forward clothes to residents of IV without requiring them to get on the freeway.

Founder and owner Kelly Scott grew up in Santa Barbara, studied sociology at the University of California, Santa Barbara, and subsequently studied fashion merchandise in New York City at the Fashion Institute of Technology. She hung around New York working for several years in the corporate world of fashion, and came back to Santa Barbara to start the boutique in 2007.

Miss Behavin’s presence as the only boutique in IV isn’t the only reason the store is so distinctive. The shop’s true exceptionality lies in Scott’s keen sense of trends and careful choice of clothes. Scott’s meticulous fashion selection seems to precede and set IV trends.

“I never buy anything that I don’t think is cute,” said Scott. “For me it’s way more fun to sell stuff that I love.”

Scott spends her days in the shop helping customers select clothes from her offerings, oftentimes taking on a personal shopper role. She says that her constant presence in IV and the fact that she maintains friendships with many of her customers assists in her task of capturing IV style.

“I think that being here all the time I kind of pick up what’s going on,” added Scott. “I’ve always been kind of good at knowing what the trends are, and I don’t know where that comes from.”

When Scott moved back to Santa Barbara after living in New York for five years, she found that IV still lacked a boutique or place for girls to buy clothes, aside from Sweet Jane, a store focusing more on party accessories than fashion. With the support of family and friends, she secured her spot on Trigo, where Miss Behavin’ has been located ever since.

“It was never a dream I necessarily thought would be a reality, ever since I went to school out here, even before,” said Scott of owning a boutique, though she says it has always been an aspiration. “I was over working for big corporate companies and I wanted to do my own thing.”

Unlike stores on State Street, Scott caters to the strange cycles of IV retail—such as a near-abandoned condition come winter break and the spike in sales that comes around Halloween.

“I seriously put my entire life into the store,” said Scott. “Because this is not like any other retail store—it’s almost the opposite.”

Scott thinks that the effort she puts into customer service, her promotional use of Facebook, and her constant flow of new clothes (shipments come in on a weekly basis) keeps her customers coming back and her business healthy.