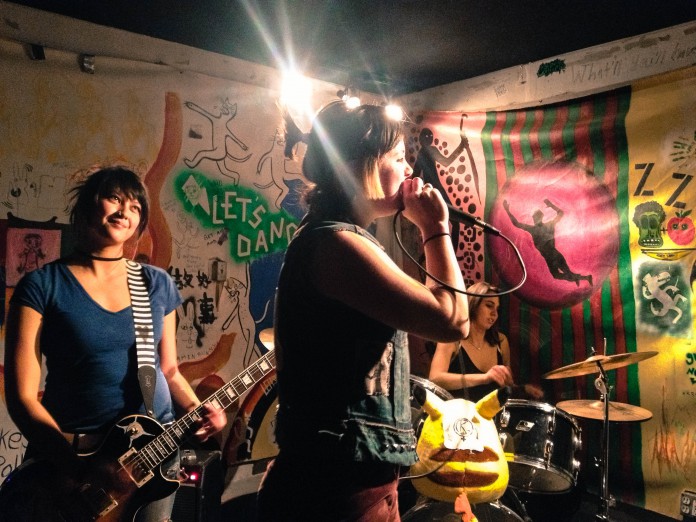 It’s nighttime on Saturday, Jan. 19, in the BIKO Co-op garage, and I’m in a sea of spontaneous combat—elbows and knees jutting from belligerently weaving bodies, restrained only by a circle of hearty shoves that establish the paradigm of a mosh pit. On the 6500 block of Del Playa this scene would undoubtedly warrant handcuffs, but at the concerts put on by all-girls punk band Genghis Kunt (GK), it’s a commonality.

“It’s a great release of energy,” said Stephanie “Staph Infection” Luna, the bassist of GK and a fourth-year history and geography double major at University of California, Santa Barbara, said about the nature of this “mosh pit.” “You’re not really trying to hurt people; there’s definitely set of unspoken rules.”

Vanessa Dasalla, the band’s guitarist and a third-year biology major, added, “If somebody falls, you pick them up right away.”

GK began as a conversation between lead singer Katrina Munsterman and Luna after a statistics class in the spring of 2011. Today, it is four girls using punk as a mouthpiece for acceptance, integration, and raw, innovative expression. Their spin on punk music can best be described by Munsterman’s description of punk in general.

“It’s something inside me that just wants to go against things,” she said.

Not only do GK’s lyrics criticize societal norms, but their musical style ruptures punk norms as well. Creating a playful, funk drum lead in the song “Pit Spit,” drummer Julie Shay broke with traditional punk percussion rhythm at the Jan. 19 concert. Remixing the band Peaches’ song “Fuck the Pain Away,” GK redefined the punk ballad in an innovative and humorous way.

Each band member had creative ways to define punk culture.

“It’s not just for people who wear patches and studded shit,” said Shay, a UCSB alumnus. “You can get in the pit and people will treat you just like anybody else…[it’s] the reason people have a good time at punk shows,” she continued, “It’s about the energy they’re giving.” Led by momentous, swarthy mosh pits and continuous head bobbing, a positive energy consumed the multi-colored garage throughout the set.

Punk music, though not as well known in Isla Vista, is not an obscure genre. Last August punk music made international headlines when the all-girls Russian punk band Pussy Riot was arrested and imprisoned for “hooliganism motivated by religious hatred.” In November, Yakaterina Samutsevich of Pussy Riot told the Daily Beast, “our art is meant to make the entire world laugh at Putin…” Slipping in social critiques through humor is what GK calls “Punkception,” or “a good way to ease things in that no one wants to hear,” Luna explained. Their song “I Hate the Beach” with lyrics like “I hate the flies” is laughable, but at the song’s core is a harsh commentary. “I don’t like a lot of the way that men treat women in Isla Vista,” Munsterman said. The key lyrics—“I don’t want to go to the beach, I don’t want your hands on me,” fiercely combat the idea of the beach as an arena where women can be objectified by their form.

“People get excited to see an all-girls band,” Luna added, “but sometimes I wonder if they’re just excited to see us or they actually like our music.” Through “punkception” GK does not mean to say that they “hate men,” nor that they are feminists.

“I don’t mind being associated with feminism,” Munsterman said, “but then musical ability kind of gets shut down.” When focus is put on the “all-girls” image, “people assume things about you that are pretty much stereotypes,” Shay said.

Busting open the garage the garage doors at one point, the rambunctious crowd showed their support for GK’s fresh and innovative spin on punk expression. The band hopes that more join in the humble punk community of Isla Vista, or the “hidden gem,” as Dasalla calls it. To get in on the secret or follow their progress, find GK’s Facebook page at facebook.com/genghiskunt99.