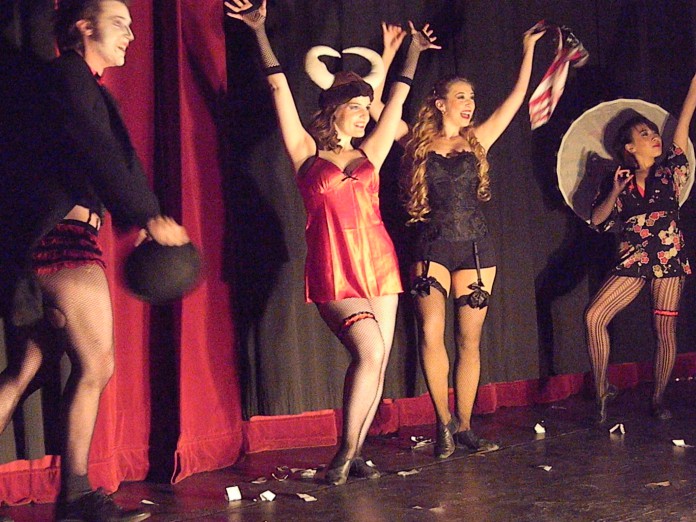 All troubles were forgotten when audience members slipped behind the curtain of the Lotte Lehmann music hall to see the Shrunken Heads Production Company’s rendition of the 1978 musical “Cabaret.” To quote a famous line from the production that I felt was aptly suited for the performance, “There, life was beautiful. The girls were beautiful. Even the orchestra was beautiful.”

The Shrunken Heads Production Company is a student-run organization that puts on musicals in the Old Little Theater in the College of Creative Studies building. However, for the 8 p.m. showings of “Cabaret” on Friday, Jan. 11, and Saturday, Jan. 12, as well as on the 18th and the 19th, The Shrunken Heads transformed the backstage of the Lotte Lehmann hall into a seedy cabaret to tell the tale of the rises and falls of love and politics in Berlin on the brink of Nazi control.

Charming girls with toothy smiles in lingerie ushered audience members into the building, directing them past the lines of empty seats in the lecture hall and up the stairs to the stage. Once the attendees moved past the curtains, they were transported to the Kit Kat Klub cabaret in 1931 Berlin. Audience members seated themselves at candlelit tables while the live band in swanky suits sipped amber liquid from a mug and bantered in German accents.

In the musical, Kit Kat Klub dancer Sally Bowles charms her way into the life and bedroom of struggling American novelist Cliff Bradshaw. As the Nazis gain power in the city, the possibility of an endless party in Berlin fades along with the romance between the flighty singer and pragmatic novelist.

Perhaps the most integral part of “Cabaret”  is the emcee, played by Patrick Bailey. Donned in woman’s lingerie and rouged cheeks, Bailey charmed the audience with his sexual innuendos, contagious energy and fearlessness. However, the emcee grows sinister by the end of the first act as the Nazi’s influence rises and transforms into a darker, subliminally political force in the second act. Bailey, as the emcee, lurked in the corners during the company reprise “Tomorrow Belongs to Me,” which is overlain with Nazi doctrine. The song ended but it was the emcee who skulked out of the shadows, giving an empty, humorless laugh as he slowly turned off the lights to end the first act.

Janessa Lea Puckett as Sally Bowles fantastically portrayed the whirlwind of emotions in the Kit Kat Klub’s headliningsinger. She was a physical powerhouse with charm, poise and a keen understanding of humor, but also touchingly showcased Sally Bowles’ more tender and undone moments during her solo “Maybe This Time.”

Kevin Mahn, playing American Cliff Bradshaw, also took advantage of the musical’s more humorous moments, but was also spot-on in the drama. Mahn made Cliff Bradshaw an endearing every-man with defining moments, such as when he yelled, “Sally, wake up! The party in Berlin is over!” when Nazi control became inevitable. However, Mahn’s finest moment was his breakdown as Sally reveals to him that she got an abortion.

Not to be forgotten are Rachel Frazin as Fräulein Schneider, the older woman who runs the boarding house where Sally and Cliff live, and Rigo Sanchez as Herr Schultz, the Jewish man who runs a fruit shop and woos Fräulein Schneider. The single most endearing number in the musical was their rendition of “It Couldn’t Please Me More” when Herr Schultz gifts a pineapple to Fräulein Schneider. However, the strongest number was Frazin’s solo “What Would You Do?” as she sang tenderly and powerfully about her debate whether to break off her engagement with Herr Schultz because of his Jewish heritage that sparks negative attention from the Nazis.

A separate, smaller stage was used to show the action in the boarding house and as the plot grows darker there, so does the ambiance in the larger stage for the scenes in the Kit Kat Klub. The humor and diversion of the cabaret fades as the first act comes to a close, allowing the darkness of the beginning of the Nazi regime to settle in for the second act. By the end, the audience leaves knowing that Herr Schultz’s convictions that the Nazi regime will come to pass cannot be so, neither can the romances in the surprisingly dark musical.

There was a cabaret. And there was a Master of Ceremonies. And for a moment, the audience was transported to a city called Berlin in a country called Germany and it was the end of the world. But at least it was beautiful.

Additional performances will take place in the Lotte Lehmann music hall at 8 p.m. on Friday, Jan. 18, and Saturday, Jan. 19. Student tickets are $7, adult tickets are $15. Arrive early and wait close to the door to claim the best seats in the Kit Kat Klub.