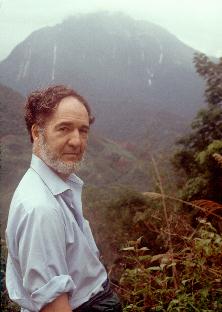 It’s safe to say that the majority of students at University of California Santa Barbara have heard of Jared Diamond’s work, whether knowingly or not. The renowned scientist and author whose range of work includes geography, biography, anthropology and more is the recipient of numerous awards and honors like the Phi Beta Kappa Award in Science (1997) and a National Medal of Science (1999).

His critically-acclaimed books “Collapse” (2005) and Pulitzer Prize-winning “Guns, Germs, and Steel” (1997) have examined the complex and multifarious reasons for the downfall of empires and subsequently drastic sociocultural changes that took place thereafter. Unlike his other works, his new book “The World Until Yesterday: What Can We Learn from Traditional Societies?” does not focus on the theoretical causal factors that tear civilizations apart, but rather approaches the disparate realms of traditional society and modern industrial society and cross-examines them in order to configure how they operate and function successfully or poorly as a complete unit. Diamond elaborated on the ideas from “The World Until Yesterday” on Jan. 12 when UCSB Arts and Lectures brought him to Campbell Hall to give a talk about his new book, where he spoke to a full crowd.

Diamond’s lecture primarily  focused on a specific chapter from “The World Until Yesterday” about the treatment of the elderly. He spoke of how traditional societies, such as those that exist in New Guinea, still care for their old much more differently than modern Americans do.  Much unlike modern American culture, traditional societies do not attempt to prolong or preserve the lives of the elderly to an unnatural length. In this regard, Diamond related the issues of age and how American culture has alienated its senior citizens as impractical and dependent creatures in a silly, but alarmingly true, anecdote:

“I, at age 75, am incompetent at skills essential for everyday American life. My family’s first television set that we acquired in 1948 had only three knobs—that I quickly mastered. (Laughter) There was an ON/OFF switch, there was a volume knob, and there was a channel selector knob. Today, just to watch a television program on the television set in the living room of my own house, I have to operate this wretched 41-button T.V. remote that I find totally confusing. To watch television I have to telephone my 25-year-old sons, and I ask them to talk me through it while I push those wretched 41 buttons,” Diamond recalled. He added that “The World Until Yesterday” is his “most personal book” because as a senior citizen, he can relate to the specific roles and responsibilities of being an elder.

This issue of struggling to keep up with the constantly evolving technological culture is one of many that Diamond covers in “The World Until Yesterday.” Other chapters involve the studies and reflections on child-rearing and other such daily interactions that occur in a social sphere.

Overall, Diamond provided a light-hearted and entertaining lecture, with many tidbits of humor interjected throughout the fundamentally grave subject matter of senescence. A captivated audience that included both white-haired attendees and bright-eyed college students listened with receptive ears, a demonstration of Diamond’s appeal to multiple age demographics. Such an audience is a testament to Diamond’s ability to guide and influence today’s youth through theoretical and practical approaches to everyday life and how humans interact, providing invaluable insight into the human condition, both traditional and modern.