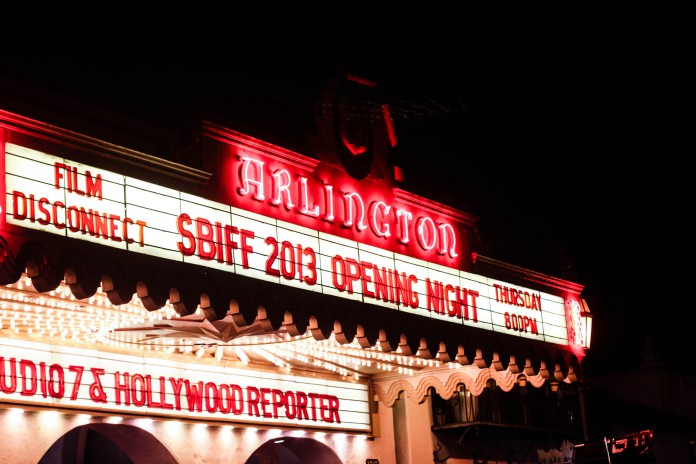 In stark contrast to its usual peaceful presence on State Street, the Arlington Theater was filled to capacity on Jan. 25, 2013, the second night of the 28th Santa Barbara International Film Festival. The night was highlighted by the Modern Master’s Award ceremony, which commemorated the cinematic achievements of Ben Affleck. The Modern Master Award is a prestigious accolade at the SBIFF for individuals who are considered to have contributed to the film-making industry by enriching it with their acting, directing, and writing.

Despite the blinding lights Affleck endured on the red carpet prior to the ceremony, he was warm and welcoming to fans posted outside the theater. Unlike the Oscars, where stars sit next to fellow stars, Affleck sat in the theater next to other guests, surrounded by ogling eyes and giddy middle-aged women. As if his presence in the audience wasn’t enough, another pleasant surprise was an appearance by Affleck’s longtime friend and fellow cinematic jack-of-all-trades Matt Damon, who sat behind Affleck during the ceremony.

After a short introduction by festival director Roger Durling and sponsors, film critic Leonard Maltin hosted and welcomed Affleck to the stage for what was more like a casual chat than a televised interview.  In between Affleck’s and Durling’s conversation, several paired scenes of movies Affleck acted, filmed, and directed in from oldest to most recent were screened, ending with his critically acclaimed film “Argo.” When asked about how it felt to watch clips from movies starred in, Affleck said, “It was fun to see my life flash before my eyes.”

Affleck appeared to be very relaxed, humbled, and quite at home when speaking with Durling. He wasn’t afraid to make fun of himself and expressed honesty regarding his opinions toward his acting, directing, and the film industry in general. The first pair of scenes screened was from 1993’s “Dazed and Confused” and 1997’s “Chasing Amy.” Affleck said that “Chasing Amy” was “a pivotal turning point for me.” Affleck began acting at a young age, and pursued his budding career with long-time friend Matt Damon, who also attended the ceremony.

A vibrant subject for conversation and fond memories was 1997’s “Good Will Hunting,” which starred Affleck as well as Damon. Affleck recalled the film with a nostalgic grin, which was not surprising given that the movie – which won Academy Awards for Best Original Screenplay and Best Actor – was written by Affleck and Damon during their young adult years in Boston.

“At its essence, we always wanted to have a movie on our shelf. It was a do-it-yourself era,” said Affleck, while making nods to other DIY films like “Reservoir Dogs.”

Also screened were clips from 2001’s “Pearl Harbor” and 2007’s “Gone Baby Gone,” which was Affleck’s debut as a director. At that point, Affleck expressed his various experiences as a director: the good, the bad, and the slightly awkward. Affleck said, “I learned a huge number of lessons. It’s constantly an uphill battle for me. I gotta work really hard. I know exactly what I’ve achieved because I know how hard I’ve worked.”

Affleck’s exposure to both sides of the camera has provided him with his own style, methods, and consideration for actors when filming.

“I like to do a lot of takes. I like to create a sense of relaxation for the actors,” he said. “I like to give actors a chance to do whatever they want.”

The cinematic triple threat’s involvement in the film industry has also matured in a different way due to his life as a father of three.

“Anything I do as an artist doing this work does get influenced by those kids. You see your reflection of yourself in them. It makes it profoundly important to me to do work with integrity,” said Affleck. Compared to his life before kids, Affleck said that “this era is something new and incredibly rewarding. I think the challenge of one’s lifetime is to make good people.”

The conversation ended with a discussion of Affleck’s new film “Argo,” which was nominated for seven Oscars this year. “Argo” also received the Golden Tomato award from the film critic website rottentomatoes.com. “I’d like to get that trophy,” said Affleck. Aside from the many nominations and praise from critics, Affleck said that “this is one of the films where I can keep talking about it. It is eerily current and examines issues of foreign policy today.”

The climactic presentation of the Modern Master award was held off until the very end of the three-hour event, but the wait was worth it. After sneaking away at one point, Damon finally appeared onstage and presented Affleck with the trophy and his congratulations, while expressing his belief in Affleck’s ability since childhood.

“My buddy is a great director. All I can think of to say is congratulations,” Damon said. “To my very old friend, and a very young master.”