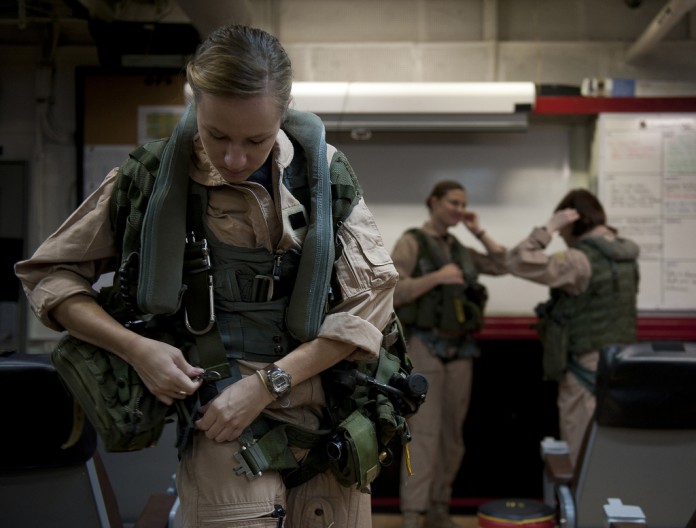 Outgoing Secretary of Defense Leon Panetta announced late last week that he plans to lift the remaining ban on women’s service in combat operations, opening the door to thousands of new roles for women in the military. Since 1994, the Pentagon had officially proscribed women from serving in combat on the front lines, despite the fact that many women in the armed forces see fighting already.
Today, the Pentagon says there are almost 200,000 women among active duty personnel, roughly 14 percent of all active duty military. Female enrollment in the armed forces took off in the mid-1960s, and today women make up over a fifth of the Air Force alone. According to the ACLU, the Pentagon’s current guidelines on servicewomen keep as many as 200,000 jobs out of reach for female soldiers.
While Secretary Panetta said the policy banning women would be lifted immediately, he is giving the Armed Forces five branches up to three years to implement the changes. While women have been serving in combat, many have not been able to receive recognition similar to that of their male colleagues because of the Pentagon’s policy of not recognizing them as combat soldiers.
Women’s roles in the military have undergone slow but gradual expansion since 1917 when women were first allowed to work as “yeomen” in the Navy. In 1977, famed civil rights lawyer Marjorie Mazen Smith successfully sued the Navy for pursuing a hiring policy based on gender discrimination. She argued another case in 1978 in which a federal judge declared the Navy’s ban on women serving on all ships a violation of the Fifth Amendment. But while the judge’s holding in the case opened the door for women to serve on Navy ships, it did not include warships and it wouldn’t be until 1998 that a woman would command a war vessel.
Codified exclusion of women in the military originated in Title X of the United States Code and was finally repealed by Congress and President Clinton in 1993. But a year later, the rule was replaced by what became known as the Pentagon’s “Combat Exclusion Policy,” which said: “Service members are eligible to be assigned to all positions for which they are qualified, except that women shall be excluded from assignment to units below the brigade level whose primary mission is to engage in direct combat on the ground.”
Women have still been in dangerous positions amidst combat for years. According to the Washington Post, as of 2012, 152 women have died in combat operations in Iraq and Afghanistan. Some of the most perilous combat roles include piloting helicopters, which women have been allowed to do since 1991 when Congress lifted a ban on women piloting aircrafts in the military.
With last week’s announcement, the U.S. joins nations such as Israel, France, and Australia in officially putting women on the front lines. Even North Korea, a nation not often known as a bastion of social equality, has allowed women to serve in combat roles since 1972, according to the New York Times.
While most lawmakers in Washington reacted positively to the news, Rep. Duncan Hunter, who represents a district that includes San Diego County, criticized the Pentagon’s move. Hunter told the Wall Street Journal that he was curious to know if physical standards would allow women to enter combat duty in large numbers.
“The focus of our military needs to be maximizing combat effectiveness,” said Rep. Duncan Hunter (R., Calif.) told the Wall Street Journal. “The question here is whether this change will actually make our military better at operating in combat and killing the enemy, since that will be their job, too.”