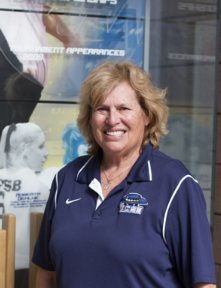 Q: What made UCSB so appealing to coach at?
A: When I was 28 years old I was playing in the IVA, which was the first women and men professional league, and I came up here for a playoff game. The coach that was here said to me ‘Hey, I’m getting my Ph.D., would you be interested in the job?’ At the time he knew I was interested because I was coaching at Marymount High School, I was a top beach player and I loved the beach. At the time it was a hard decision because I didn’t want to leave Santa Monica, so for my first year I took a leave of absence just to make sure I liked Santa Barbara. The first year was interesting because I had to teach like 10 classes a quarter, and I was coaching, and I was in this old gym that was like 199 degrees and I had no scholarships and I had no assistants! So after that first year I thought that I would have to go back to high school, but at the end of the year, there was a proposal where coaches only had to teach half time, so if I hadn’t gotten that, I would have gone back to high school.

Q: You’re one of eight coaches to have won over 800 matches. How did you feel after accomplishing such a feat?
A: I’m very blessed because I’m in tremendous health, and I have an unbelievable amount of energy. I feel that I was lucky to be in that situation at a university, to be able to accomplish that number of wins, with physical and mental health. My life has always been one of gratitude and appreciation, and I try to never take anything for granted, and to live in the moment. I’m one of the luckiest people in the world to have been able to coach for 38 years. It will never be done again because coaching has become very difficult and challenging. Times are much different so I appreciate what I was able to do.

Q: Out your 38 years of coaching, what would you say was your greatest moment?
A: It’s very hard to pick the greatest moment, but I will say that one of the greatest moments was when I coached a player by the name of Judy Bellomo who transferred here and had two years to play. Her first year she helped us get to the NCAA tournament and then asked me “How can I be the best player I can possibly be?” She worked harder than anyone I had ever seen, her personality was extremely similar to mine. After a game, her voice would be so hoarse just like mine. She went from an average player to a first team All-American. It will never be done again. She then went on to be a top beach player and joined the Olympic team. The sad part of the story is that she passed away at the young age of 23. I think the reason why I coached so long was because every day that I had a down day, I would talk to her. I would talk to her before every match, and I think she inspired me to coach longer than I ever would.

Q: What were some of your major goals that you wanted to accomplish as a coach?
A: When you’re a young coach, your major goal is to win, so winning was always a priority, but as I matured, and after the winning, I really tried to focus on the life skills. I was a very tough and demanding coach and my girls will tell you I was a hard coach but I take it as a compliment. Now that I’ve retired, I’ve received hundreds of thank you letters and emails and all I’ve wanted them to be was confident young women and to take whatever life gave them. Life is challenging and there are going to be times in your life where you are going to have to pick yourself up and recover for something. And I think that’s the most important goal I had, for them to be prepared for the real world.

Q: You’ve been in the volleyball world for years now, and I can’t imagine that this is it for you, so what do you have planned next?
A: Well since I’ve announced my retirement I’ve had numerous requests to start a training center. I’m going back San Marcos, California, where they are going to start a beach volleyball program where I will work with Erica Menzel, one of my all time favorite players that also went to San Marcos High School and is coming back to coach. I’m also going to try and get the UCSB and San Marcos volleyball program going. I’ve gotten calls to do TV because I’ve worked with ESPN before, and I’ve even gotten calls about doing some motivational speaking. So I think my plate is going to be pretty full and I want to accomplish more.  I’m a firm believer in giving back, because in return I have been blessed with so much happiness each day. I’m so lucky to be able to retire in Santa Barbara and walk the beaches and to reflect and be happy.