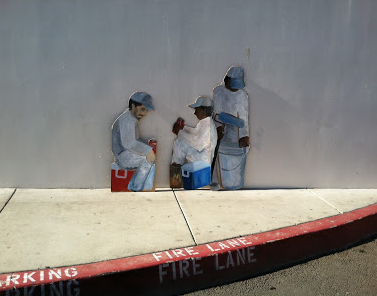 Latino artist Ramiro Gomez was on the way back from the supermarket two weeks ago when he was suddenly confronted with jarring flashlights directed at his face and a group of sheriffs slapping handcuffs on his wrists.

There had been a case of armed robbery nearby, and he was being detained as a suspect because the robber was described as a “Hispanic man wearing a striped shirt and black jeans.”

At a discussion event hosted by the Multi-Cultural Center on Tuesday, Nov. 13, titled “Quiet is the New Loud: Art for Social Change,” Gomez described to a room packed with University of California Santa Barbara students and staff the humiliation of that experience, and how the selectivity of the police in arresting people based on racial categories was particularly unnerving for him.

A native of San Bernardino and now a resident in Los Angeles, Gomez is a street artist best known for his installation artwork in the Hollywood Hills district. Born in a working-class family and having dropped out of school, Gomez ended up taking on a job as a nanny in Beverly Hills, looking after children for many families.

“It was then that I began to take notice of the people who were often around me, such as Leticia, a housekeeper from Mexico, people who came in every day and did the jobs that they were supposed to do,” he said.

The personal is very much the political for Gomez. Aware of the widespread tendency to vilify these migrant service workers who are often dismissed as “illegal immigrants,” and the lack of recognition that is often paid to these invisible people behind the perfectly sculpted gardens and shiny surfaces of large homes in Beverly Hills, Gomez began painting giant life-sized cardboard portraits of Latino service workers and leaving them in strategic locations: a painting of a gardener can be carefully tied to a hedge, for example.

By installing these paper cutouts of Latino service workers in the Beverly Hills district, Gomez hopes that people will see the area in a different light, especially the tourists who come by in tour buses.

“The key thing is to create conversation, and for people to recognize the humanity of these service workers. We’re all connected in some ways and forms but these might not be initially apparent to everybody,” he said.

Art is a way for him to communicate his frustration at the treatment of these service workers, and the humiliating incident of having been racially identified and arrested two weeks ago, allowing him an intimate, solitary space to make meaning from his past experiences.

The sounds of a penknife slicing into thick cardboard that he had scavenged from Costco filled the room as he demonstrated the process of creating his art pieces to the audience in the MCC lounge. Gomez reflected, “I’ve always been very inspired by activism. At what point does it become productive or aggressive? I see this as a release—of thoughts, of aggression. Quiet is a new loud.”

Having received substantial media attention over the past few months, with UCSB Black Studies professor George Lipsitz also discussing his work in classes and public lectures, Gomez’s artwork has become increasingly sought after. However, he describes leaving his artwork behind in these public spaces as the “most liberating” experience he ever had.

“A lot of people paint to hold on to and possess something, but the point of street art is to leave it. It is not something that belongs on the wall or in somebody’s home,” he said.

Monica Martinez, a third-year math major, said that she appreciated how the cardboard cutouts possessed no distinct identifying facial features.

“It’s almost as if I can fill the cutouts with the faces of other people that I know,” she said. “Gomez’s work is very relatable for me, and the awareness that he is spreading with his art is great.”

Gomez didn’t have quite enough time to finish the pieces that he had started by the end of the one and a half hour long discussion, but it was obvious what the result would be when he propped the cardboard pieces up against the wall: a male figure in a white top and dark jeans, hands folded over the back of his head in surrender.

“Once this is finished, I’ll be placing this artwork back into the same neighborhood where I got arrested,” he said.

More of Ramiro Gomez’s work can be viewed on his blog Happy Hills (http://ramirogomezjr.blogspot.com/)