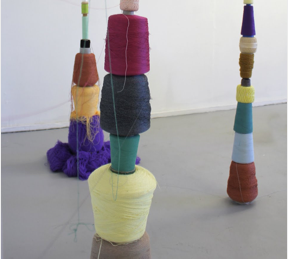 Multiple art mediums were manipulated in eclectic ways and presented to the public on Friday, Nov. 9, when the Master of Fine Arts program at UCSB held its fall 2012 Open Studios event at Harder Stadium.

The event, which started at 5 p.m., presented both the completed and in-progress works of 11 students enrolled in the university’s intense two-year MFA program. Open Studios offers an opportunity for other UCSB students and the greater community to view the collections in a relaxed setting, complete with refreshments.

Sommer Sheffield, who works under the name Sommer Roman, exhibited pieces centered on themes of feminism and labor, using the textile industry of the early 20th century as inspiration. In particular, her totem poles, three separate works of colored yarn spools stacked several feet high, were created with the 1911 Triangle Shirtwaist Factory fire in mind. Their simplicity reflects Sheffield’s fascination with the objects themselves as implements of textile production, but on a deeper level the totem poles explore considerably more complex ideas. In her artist’s statement found at her website, sommerroman.com, Sheffield says of her work, “Using mundane materials and remnants of consumer culture, I create pictures, objects, and environments that explore ideas of regeneration, resilience, and imagination.” Her other works at the event included large, 3D fiber figures made to look like pincushions and moss. I thought Sheffield’s pieces were the most romantic in the show, which I find particularly valuable in avant-garde work that typically lacks that sort of whimsical aesthetic quality.

Clare Little’s studio had an animalistic presence, characterized by several pieces of furniture and décor infused with animal forms. Little is especially interested in the unique position of humans as a link between nature and the divine, and I found her focus especially provoking.

“This relationship between the feral and the tame has become my focus of exploration,” she writes on the Graduates 2014 page of artsite.arts.ucsb.edu. She emphasizes this in pieces where domestic objects are infused with an animal figure, like a prosthetic otter hanging above a lamp or deer heads emerging from a mirror. Little uses these works to symbolize animals as poltergeists coming out of architecture. One in particular, called “Fear and Failure,” consists of a growling bear head—with gold painted teeth and frosted flowers around its mouth—emerging from a flat table surface. The illusion that the bear is sinking into the surface conveyed the concept of how fearing to take action will automatically lead to failure, because no action is taken at all.

Whereas Little’s art showcased Mother Nature, Sterling Crispin’s studio highlighted modern development via a fusion of technology and art. One of her pieces involved a hologram created for military use. Crispin makes a point of using the material not for its original purpose, but rather for beauty and poetry. He explains the piece’s complex foundation on his website, sterlingcrispin.com:

“An even field of points occupies the image making the illusion and sensation of space visible, without burdening the viewer with a symbol, sign, or reference to the outside world. With each new row of points deeper in space their even distribution is disrupted progressively with a fractal turbulent pattern…As the form becomes more turbulent the number of points decreases, allowing it to dissolve and decay, thereby introducing entropy into a digital and static interior world. This turbulence takes the form of a ghostly apparition, at once seeming like a human form and a wisp of smoke. In the deepest space visible within the hologram, an aura of turquoise light shimmers, calling the viewer to gaze into the maw of an incorporeal void.”

According to Crispin, technology is inherently a part of humans. The hologram itself is an element of our material world, but the image we begin to see reveals an ascent to the enlightened mind. For me, Crispin’s studio showed the most innovative and revolutionary work. He created a complete reversal of roles for a particular material, and that is exceptional.

Aside from the aforementioned artists, Open Studios also included a piñata fashioned after the likeness of its creator, Ryan Bulis, and various exercises that visitors could do themselves, such as entering a booth, drawing a self-portrait and hanging it on a wall or making a paper airplane out of a drawing. Other artists at the event include Alexander Bogdanov, James Cathey, Cathy Ellis, Alison Ho, Tristan Newcomb, Maria Rendon, Chris Silva and Erik Sultzer. The event exhibited not only the diversity of interests within the MFA program, but the artists’ inherent and developed talents as well.