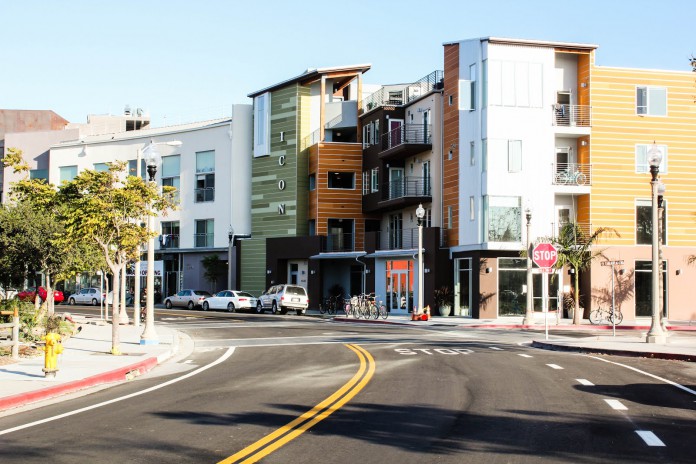 Walking in to my new apartment, I was stoked. Newly-constructed building, ocean view from my bedroom window, gorgeous black stone showers—believe me, I felt like the luckiest Isla Vista tenant to ever sign what I later realized to be a convoluted lease.

I had just moved in to the Icon building: that big, orange blip in the way of everyone else’s ocean view. It had been under construction all of last year and when I signed my lease, I was nervous it wouldn’t be built in time for fall quarter.

It turns out that’s not all I should have been biting my nails about.

Let me tell you that when I signed my lease, I was deliriously happy. I had seen projected illustrations of what my apartment would look like as well as material about our “state-of-the-art, ocean view” gym and study room and was convinced this was the place for me.

I loved that the apartment came fully furnished with full beds, an in-unit washer and dryer, a flat screen TV with Internet and cable. My bedroom would have its own balcony and my apartment would have a private rooftop (to study on, of course, what’s a party?). I couldn’t imagine anything better. Which is why I was willing to pay the cringingly steep rent—$999 per person.

Now before I explain my frustration with Icon, I have to elaborate on my rent situation. My parents give me $700 every month—and I am so grateful for that—but I have to cover the difference ($300 for rent, $50 for utilities, $200 for my sushi addiction etc.), meaning I have to work to live where I live.

What is frustrating is that the reasons I was willing to pay $999 instead of the more common rent between 600 and 700 bucks a month—the gym, the study room, free Internet, hinted promise of a sauna and pool—didn’t translate from marketing material to real life.

Upon move-in, the only furniture in my “furnished apartment” was my bed, and it was a twin, not a full as promised. My shower wasn’t working, and it was covered in grout. The stairs had plywood peeking out and the door to the rooftop deck wouldn’t shut properly. The kitchen, a kitchen that six people were supposed to comfortably use, had the shelf space of about four shoeboxes stacked together and the refrigerator was about a foot bigger than the standard mini fridge. Our dishwasher was not working.

My “private” balcony was shared with the house next door (thank the IV gods that the guys next door are great and not scary creeper children).

The construction on the building itself was grossly unfinished; you could practically shoot an apocalyptic zombie film in the hallways with the raw building materials strewn about, the caution tape everywhere and the general atmosphere of an abandoned construction zone.

The fitness center and study room—the main reasons I chose to move to Icon, were nowhere to be found.

But I dealt with it. I was way too happy to be living on my own in IV, with a gorgeous view, a rooftop deck, in a new apartment. I was a happy baby and I confident that everything would work itself out eventually.

Not the case. My optimistic naïveté turned out to be just that. My Internet didn’t work for five days at a time for the first month and continues to be spotty at best. My shower was “fixed,” but has atrocious water pressure and heats up to about ten degrees below adequate. The missing furniture took weeks to arrive and the promised extras, such as a second couch (the first is more of a love seat), still haven’t been installed. Half the unfinished steps are now temporarily carpeted, the other half are still plywood. The construction around the building seems to have stopped but many things remain unfinished, with peeking plywood and remnants of caution tape. The cement walkway outside of my unit was unfinished, forcing me and my housemates to evacuate our home for eight hours for four days while it was being worked on. My bathroom sink was leaking and molded over before the landlord finally got it fixed. A unit a few doors down had to call the health inspector after they discovered a deep black mushroom growing randomly from one of their walls.

The fitness center, one of the main reasons I was willing to pay so much for my spot in the building, wasn’t completed until a couple of weeks ago—and it’s less “state of the art” and more like “two ellipticals crammed into a bedroom sized area.”

And the ocean view? Yeah, no. The machines all look out onto The Loop’s (much, much better) gym instead of the ocean. And it’s not just crappy layout, it’s shoddy construction; the tenants living right below the gym complain about how their plates rattle when someone is working out.

The study center, the other main reason I signed on to live at Icon, has been completed this past week. It is the size of one of the smaller classrooms at Girvetz and a humongous conference table fills the whole thing. It’d be a lovely place to have a section, but it doesn’t exactly match up to the study room we were promised.

Even now when you look at their website, they promise the “state-of-the-art fitness center will have plenty of cardio equipment with individual televisions, strength machines and free weights. [reality: two ellipticals, two treadmills, two bikes, all poor quality] For early risers and night owls, our gym will be open 24 hours a day, and will have amazing ocean views!” and “All of our units will feature private balconies,” among other hyped up assurances.

Now the last thing I want to do is sound like a whiny, ungrateful brat. I know how lucky I am to live in such a great (despite its flaws) place. But what really pushes my buttons is the way I have been treated as a tenant.

There is a huge discrepancy between what Icon promised and what they have provided. At every turn, our requests were met with delayed response or simply ignored. Spoken promises weren’t carried out. I was told by one of the owners that it was my fault my expectations weren’t met, that if I choose to move into an apartment still under construction, I should expect that it “sucks.”

Under these circumstances, I would take my money and go live at a reasonably priced apartment with a normal landlord, but my lease prohibits that from happening unless I find someone to replace me.

I’m an understanding person—I get that everyone doing their best but with that said, I am not okay with being disrespected and misled as a tenant just because I am a college student with no perceived clout. It is unethical and reprehensible for Icon to renege on advertised promises and I will do everything I can to hold them accountable.