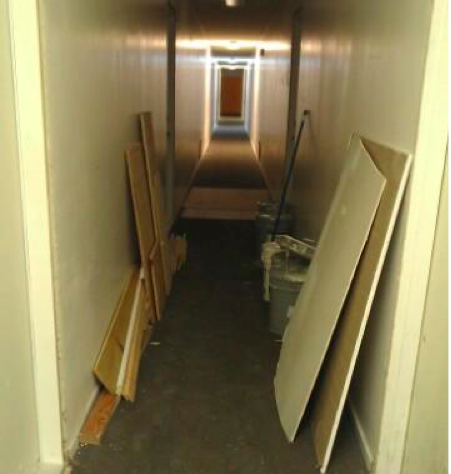 Garcia and her 84-year-old husband, who has Alzheimer’s, now live out of a garage. They were uprooted from their Isla Vista home in May when Platler Capital Management, a San Clemente-based company, acquired ownership of their apartment complex at Embarcadero Del Norte.

Garcia said that it affected her health and caused her anxiety. Though she told their landlord that she would pay any additional rent, he still required that they leave.

Victor Balbuena, who works at Subway locations in Isla Vista and Goleta, said that he and his 9-year-old and 12-year-old sons, whom he raised at the property, were traumatized by the situation. After giving them a 60-day lease termination, Platler, who declined to comment for this story, would repeatedly pound on their door and urge that they leave before they were required to.

Platler took ownership of Balbuena and Garcia’s property on April 27, gave notice that he was raising rent by 10 percent on May 1, and then proceeded to evict several tenants at a time on a gradual basis. As of Nov. 27, 11 tenants have come forward to Associated Students Isla Vista Tenants Union who have received termination notices, and seven of them have moved out of 781 Embarcadero Del Norte.

The tenants who have been evicted could now be entitled to up to $10,500 per unit, according to Robin Unander, the attorney representing the tenants. Although certain tenants reported that Platler initially refused to allow them to remain at their homes, even if they paid the increased rent, legal negotiations have led to some tenants being allowed to stay.

“The landlord has agreed to allow three units to remain at the premises at an increased rent in remodeled units,” said Unander.

Unander also said that because construction was conducted while the tenants were still living in their homes, they should be able to be partially refunded for the rent they paid during the time.

“The landlord has also agreed to let one tenant who opted not to move into a remodeled unit to vacate by Jan. 15 instead of Dec. 8, and is giving rent credit for the disruption and disturbances from construction the tenant lived through,” added Unander. “We will be negotiating similar rent refund for all tenants who lived through the remodeling construction of the units, though the amount of credit will vary depending on how long the tenant lived at the complex and dealt with the construction. This credit or refund is because of a breach of the rental agreement by the landlord to provide a place of quiet enjoyment, free from unreasonable disturbances by the landlord. Ongoing construction for months constitutes an unreasonable disturbance for the tenants, and they should not have to pay 100 percent  rent during the times of disturbance.”

IVTU interpreted Platler’s eviction actions as a motion to clear families out of their housing to focus on their intended market: students.  IVTU theorizes that Platler believes he can get away with charging students more than families.

“There’s an opportunity to get more money from students, so why not just evict all the families who cannot afford to pay more? said Samir Azizi, IVTU chair and third-year economics and accounting major, explaining what IVTU sees as the motives behind the mass eviction. “Bring in more students—their parents can pay more.”

“I think that developers think that they can get more money out of students,” said Hilary Kleger, Isla Vista Community Adviser, who has been working with the tenants through IVTU. “So his intention was to evict all the families and raise the rent. Basically, a lot of these out-of-town developers are looking for properties that are maybe a little bit run down—fixer-uppers…What’s disturbing to me is that there is a trend. They are not local landlords. They have an investor and they come in and purchase these buildings that are home to low-income and Latino residents. They’re displacing families. This isn’t the first time this landlord has done this to working.”

Gloria Silva was the first 781 tenant to approach IVTU in the middle of her eviction notice in September. Not only was she abruptly asked to leave her home of eight years, but she was also offered $500 to leave faster than 60 days, said Silva. Silva moved into the apartment with her friend and their combined total of five daughters.

Silva said that on multiple occasions, she would return from work to find workers inside her home doing construction on its doors and windows. She would also find her water shut off—all actions for which Platler provided no notice.

IVTU followed up in September by informing Platler Management that he owed his evictees a certain sum, due to County Ordinance 4444. He provided IVTU no response, but immediately stopped sending eviction notices, and started rescinding the notices sent to people who were still in their window of eviction, including Silva—the day after the sixtieth day while she was in the process of moving her belongings out.

“We believe the ordinance applied because the landlord had not offered replacement apartments, had not offered to let them move back in,” said Kleger. “[The compensation] was three times the monthly for housing rent or $7000, whichever is greater.”

The compensation Platler is required to provide to the tenants is still in a state of negotiation, according to IVTU.

The three tenants interviewed said that none of them have received their security deposits back. The county requires the landlord to send it after a period of 21 days, which has passed in all cases.

The 781 Embarcadero Del Norte property was previously managed by Sierra Property Management, and a previous private owner the interviewed tenants said that they had no problems with any of these owners.

Although those evicted are not UCSB students, they are working members of the Isla Vista community. Their displacement affects IV in its entirety, said Kleger.

“When a lot of families or tenants are evicted at once, it creates a drain on the community,” said Klegar. “It puts a strain on the social services, and, more importantly, on the families themselves who have to find replacement housing that they can afford, near their workplaces and children’s schools.