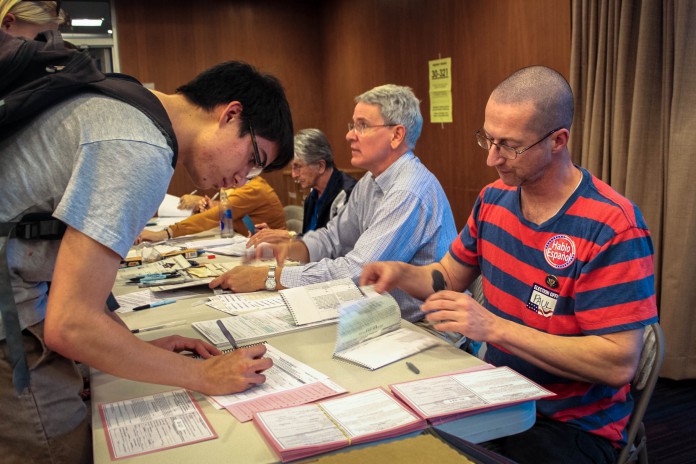 12:36 a.m. Democratic candidate and incumbent for California in the U.S. House of Representatives, Lois Capps, is victorious with 54.8 percent of the vote.

11:50 p.m. Minnesota has voted ‘No’ to denying same-sex couples the right to get married with a majority of 52 percent.

11:43 p.m. Proposition 39 (Business Tax for Clean Energy Funding) has passed while Proposition 31 has failed to create a two-year budget cycle and give the governor budget-cutting powers during financial crises. Democratic candidate Dianne Feinstein has been re-elected to the U.S. Senate with a 20 percent lead over the Republican candidate, Elizabeth Emken.

10:57 p.m. President Barack Obama gives his victory speech to millions of viewers nationwide after being re-elected with a final electoral college vote count at 303 votes to Romney’s 203. “We may have battled fiercely,” said President Obama of opponent Mitt Romney. “Only because we love this country deeply.”  Obama stirred the crowd with talk of past difficult times, hard work to be done and a better future for all. “Whether I have earned your vote or not, I have listened to you. I have learned from you. You have made me a better President,” said Obama. “Tonight you voted for action.”

10:46 p.m. Proposition 36 changing the Three Strikes Law in California passes. Puerto Rico’s vote for statehood is too close to call at the moment.

9:37 p.m. Both the states of Colorado and Washington have legalized the recreational use of marijuana by adults. Proposition 35 has passed, according to the New York Times.

9:17 p.m. Maine has legalized same-sex marriage, according to the Huffington Post.

9:06 p.m. Fourteen percent of votes have been reported in the state of California.

8:52 p.m. According to the Secretary of State for the state of California, the majority of voters (58 percent) have voted ‘No’ on Proposition 37 (Genetically Engineered Food Labeling).

8:12 p.m. The voters of Minnesota, Maryland and Maine lean towards legalizing same-sex marriages or maintaining their legality.

8:00 p.m. According to CNN, Obama leads with 238 of the total electoral college votes after California’s 55 votes were included in the total, while Romney has 191. The majority of the popular vote still leans towards Romney at 50.6 percent. Florida remains a battleground with Obama slightly ahead with 49.7 percent while Romney holds 49.5 percent of the vote.

7:10 p.m. The results project that the control of Senate is leaning toward Democrats with 43 percent, Republicans closing in on the lead with 42 percent.

6:55 p.m. Florida shows a deadlock between Obama and Romney with 85 percent of the votes in; Obama leads 49.7 percent, Romney slightly trails with 49.4 percent.

6:45 p.m. Four states have measures included on their ballots determining the legalization of same-sex marriage. Although very few of the votes have been reported for these particular measures, the majority of these voters in Maine have voted ‘No’ to legalizing same-sex marriages while Maryland is leaning toward an affirmative vote with 53 percent of the 1 percent of reported votes voting ‘Yes.’ No votes have been reported for Minnesota or Washington.

6:33 p.m. The results are steadily coming in for the following swing states: (Virginia) Romney leads 53 percent with 45 percent of the vote, (New Hampshire) Obama leads with 14 percent of the vote, (North Carolina) 14 percent with Romney at 50.2 percent, (Ohio) with 9 percent Obama leads with 54.7 percent, (Florida) votes fluctuate between Obama and Romney but 75 percent of the votes have been reported. The results for Colorado, Iowa, Nevada, and Wisconsin are still unavailable. Romney leads in the electoral votes with 154, Obama 124.

5:00 p.m. In the middle of Election Day, many students have already voted and many promoters are helping students find their polling places.

It is still too early to know any results, and poll workers are not allowed to give any information, but there is a general consensus that a lot of people are excited to vote and know where they are voting.

“Based on the people we’ve talked to, it seems like a lot of people are going to vote and are interested in voting,” said Gauchos for Capps member Dana Paikowsky. “Also a lot of people seem to be excited about Proposition 30 so that’s good.”

There are many different organizations on and off campus that are trying to get people to vote. Most groups are just hoping to get the over 11,000 registered voters to actually vote.

“I’ve seen a lot of people out with vote stickers, so it’s looking good so far,” said Campus Democrats Vice-President of Affairs Michael Angarola. “We’ve got a lot of tables around campus and IV and we’re just hoping people go vote.”

Election information will be updated as results are counted.