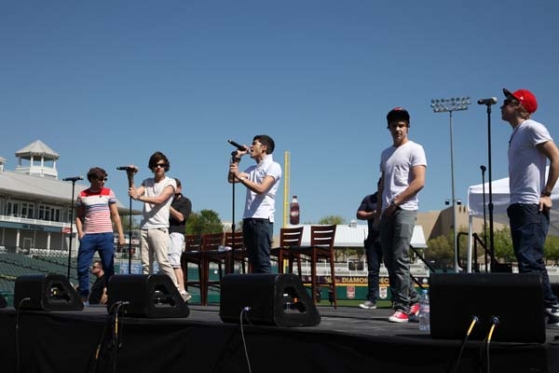 Looks like it’s that time of year, because Britain’s favorite boys are crossing the pond again and bringing their new album stateside. One Direction’s sophomore effort, “Take Me Home,” recently debuted in the top ten of every international music chart it has hit and is poised to take the No. 1 spot here in the U.S. as well.

However, before the haters start retreating into their bomb shelters in order to avoid this inevitable pop-rock boy band explosion, the quintet deserves a fair chance. Forget the fandom and the popularity. It’s time to dissect this music in a rational way, and since I seem to be one of the few people who is undecided about the group and, as a straight male, not hypnotized by Harry Styles’ dreamy eyes, I feel that I am up to the task. Is this album just another half-assed cash cow, or does “Take Me Home” take advantage of the band’s massive popularity to experiment and bring a higher degree of quality to the mainstream?

Let me be clear before I begin my analysis: if you are not already part of the One D Army, this album will likely not change anything. The majority of the 13 tracks on “Take Me Home”—17 if you are looking to pick up the deluxe edition—are in the same upbeat, boyishly silly style as previous smash hits “One Thing” and “What Makes You Beautiful.” This trend is evident from the first track, the pop anthem “Live While We’re Young,” which has done a good job as the album’s lead single that broke the record for the highest debut on the Billboard Hot 100 ever for a U.K. group (keep in mind, this includes The Beatles). It’s energetic, it’s fun and it’s a manufactured hit. The hook of “Tonight let’s get some / And live while we’re young” may be groan-inducing for some of the harsher critics, but this is what One Direction does best. It’s simple, slightly edgy for this type of music (when’s the last time you heard a boy band literally say that they’re out to “get some”?) and it sets the stage for a flurry of similar songs, such as the bouncy “Heart Attack,” the generally pleasant “C’mon, C’mon” and the foot-stomping “Rock Me.”

The overall production quality bears note, with a talented team of mainstream mainstays like Dr. Luke, Cirkut and Rami Yacoub keeping a consistent energy with a notably clean sound. This isn’t to say the producers do a flawless job; as mindlessly enjoyable as they are, too many of the tracks on “Take Me Home” unfortunately seem to blend together. Since these pop-rock party songs make up the crux of the album, the general impression made is much weaker as a result. I’m still not convinced that the tempo shifting “Kiss You” and “Back For You” aren’t the same song.  Like I said, the tracks are fun to listen to, but once the honeymoon wears off, listeners who aren’t enamored with the group will frankly be left bored. As nice as the album sounds, there is a palatable lack of substance on display.

One Direction thankfully does not stay mired in the conventions of its previous hits for the entire album, though. “Take Me Home” features a much broader selection of ballads and quiet acoustic pieces than their “Up All Night” debut. Highlighted by the album’s second single “Little Things” and the excellently produced “Over Again,” both penned by surprise addition to the One D team Ed Sheeran, the boys show that they are willing to embrace a more quiet side and resist being completely defined by their hyperactive high school jams. This side of the album is rounded out by similarly subdued tracks such as “Change My Mind” and “Summer Love,” letting the actually quite talented youngsters flex their singing ability a bit more than some of their more stratospherically popular entries would allow.

There is nothing inherently wrong with “Take Me Home,” or One Direction in general. True, they may represent the worrying trends in the mainstream music industry, and with acts like Justin Bieber and Demi Lovato also lighting up the charts, there is a compelling argument to be made for “manufactured” artists and songs clogging the airways and making it harder for more varied and experimental music to shine. However, this is neither here nor there. I promised an unbiased take on the newest album from the British boy wonders, and that is what I will give.

All in all, “Take Me Home” is an enjoyable listen, with production at the top of its class and a fair degree of talent behind the Auto-Tune. Still, there is nothing truly exceptional or revolutionary about the album. Fans will eat it up, but the brief forays into more contemplative and quiet music won’t be enough to win any new converts, and a large group of people will find it to be an absolute wash. It wasn’t even enough to take me off the fence about the group. So there you have it: a rational, objective look at One Direction, completely independent of Harry Styles’ charms.

We all know Zayn is the hot one anyway.