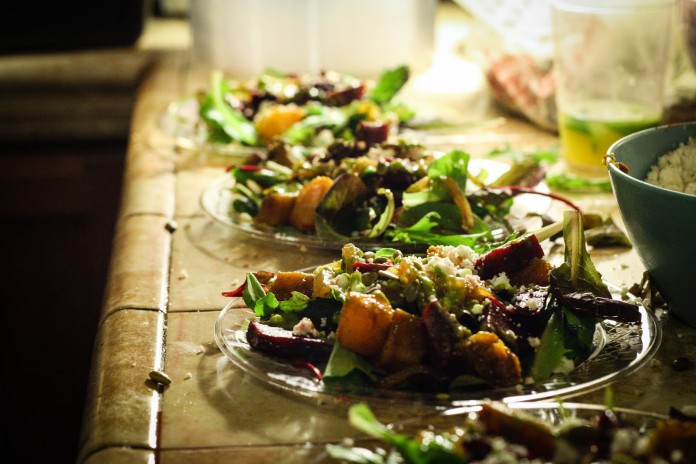 For many University of California Santa Barbara students, Saturday nights are the same. Eat, pre-game, go to Del Playa, game some more and pray you won’t wake up on the sidewalk the next morning. It’s the circle of life on Del Playa and is generally true for the entire street, except for the 6800 block. This last block has a reputation only for being low key and constituting the farthest border of Isla Vista society.

But the stereotypical Isla Vista house party is about to get an upgrade.

A new kind of party is being held in the 6800 block. It’s a house party, supper club and charity group combined under one roof. This is what Lucas Ryden, a fourth-year global studies major, has created. Every other Saturday night at 7 p.m. Ryden prepares a three-course meal for up to 40 friends at a time, with his friends helping out as servers and bartenders, all for a charitable cause.

Ryden has worked in restaurants since he was 16, where he says he sustained a passing interest in cooking. It was not until he studied in Spain, where he met a renowned local chef, that his interest blossomed.

“I took a cooking class with him and really got to learn about cooking. That’s when I became serious about it, when it became more of a passion,” he said.

When he returned the UCSB, Ryden became inspired to put his culinary savvy to use after seeing first hand how Spaniards thought about food. “Everywhere in Europe everyone is proud of their national and even local cuisines, and it’s a big part of their identity. I am from San Diego and when I came back home I began to notice that Southern California really doesn’t have that. I wanted to create that sense of a Southern California cuisine.”

This year Ryden founded Sabor, a culinary project devoted to developing regional California cuisines. Through Sabor, Ryden also linked another of his interests, charity work. At Sabor events, guests pay $10 ($20 if they drink from the bar) and whatever money is left over after food costs is given to The Hunger Project, a non-profit devoted to, “end[ing] hunger and poverty by pioneering sustainable, grassroots, women-centered strategies,” according to the group’s mission statement.

For Ryden, The Hunger Project was an obvious choice.

“My parents met while working for The Hunger Project in the 1980s so I have a close relationship with the organization. It’s a very unique organization because they spend a lot of time getting actual resources to the people who need it,” Ryden said.

When guests go to the parties, everyone knows Ryden, but marginally. One partygoer has a roommate who knew the prior tenant of the house Ryden now lives in and was somehow invited. Everybody knows him yet he is nowhere to be seen, the Tyler Durden of Del Playa. You can find him though in the downstairs kitchen where he and his friends work to get the dinner plates out to the guests. The food is served simply and without pretension. Two people carry a long wooden plank with plates of food into the living room and make a lap around the room, guests picking their serving as the plank passes by. That and the makeshift bar of tree stumps and particle board reminds partygoers they are still in IV.

But a glance at the food tells a different story. The first course of the night was a mixed green salad with roasted squash, beets and onions with a spicy cilantro dressing and pumpkin seeds. The next two courses were tacos, the first a bacon taco topped with tomato salsa, an avocado cream sauce, sweet jalapenos and queso fresco, and the second an ahi tuna taco with another avocado salsa and coconut cole slaw.

Ryden hopes to expand Sabor into an on-campus community organization so that he can serve even more people. But for now, Ryden has taken the average IV house party and made it into an entirely unique experience. For more information about the parties and Ryden’s recipes, check out www.sabor-kitchen.com