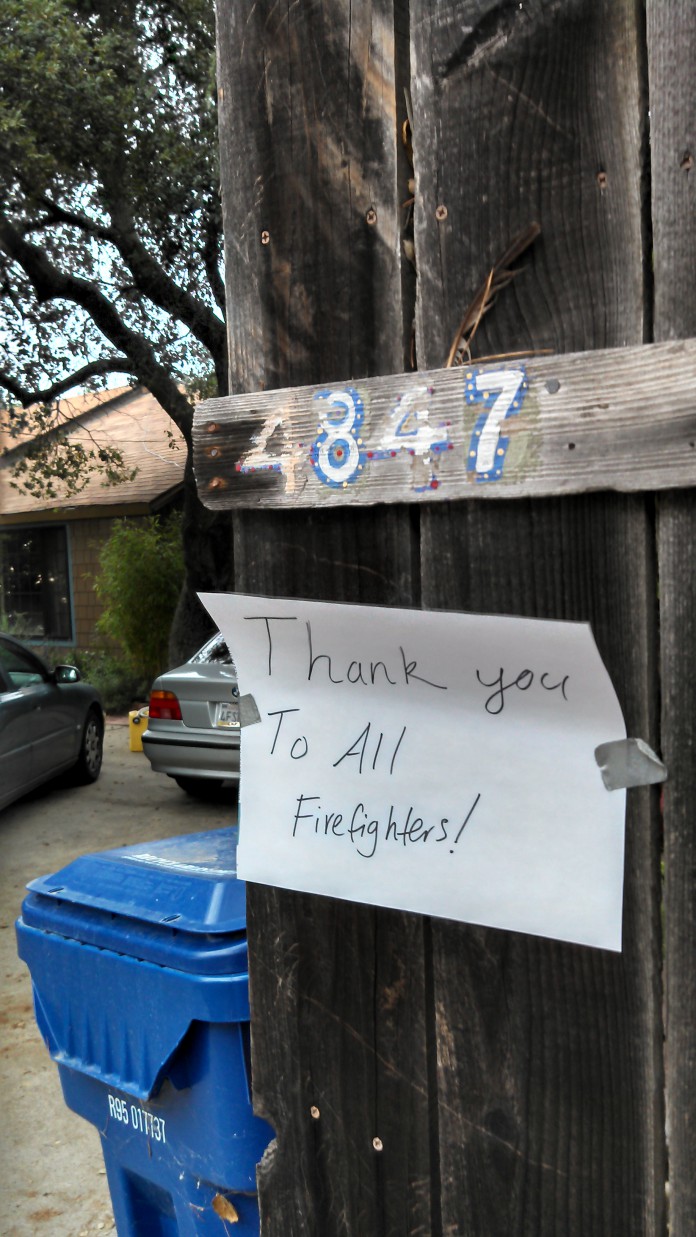 The fire originated at approximately 7:49 a.m. on Wednesday morning and had breached nearly 44 acres by the time of its containment on Thursday evening. Hundreds of firefighters, seven helicopters, three air tankers, two bulldozers and at least 10 fire engines worked nonstop to set a perimeter around the raging blaze. According to Captain David Sedecki, a Santa Barbara County Fire spokesman, two firefighters sustained minor injuries—one from a leg injury and one from dehydration—but there was no damage to local residents or their property.

Firefighters were aided by favorable weather conditions: temperatures stayed in the low eighties on both Wednesday and Thursday, while high humidity on the mountain ridge helped keep moisture levels high and prevent the fire from becoming even more out-of-control. The fire erupted on a steep hillside full of brush that had not burned in decades—so steep, in fact, that some firefighters described the scene as a “bowling alley,” with rocks and boulders rolling down the incline.

“It burned on a very steep slope, upper watershed—very susceptible to erosion,” explained U.S. Forest Service Spokesman Rich Phelps. “It was brush that hadn’t burned in a couple decades.”

Fire Department and Forest Service authorities are investigating the source of the blaze, although the lion’s share of the manpower thus far has been directed toward containment. Original estimates set a goal of complete containment of the fire for 6:00 p.m. on Friday, Oct. 19. As of 5:00 Thursday evening, however, firefighters at the scene proclaimed that the fire had been contained, meaning that a perimeter of protective “hoseways” had been set around the burning portions.

Highway 154 over San Marcos Pass remained open for traffic throughout the ordeal, although signs were posted warning drivers of fire department equipment on the road. Painted Caves Road was closed to the public for most of Wednesday but had re-opened by Thursday morning after the flames had calmed down. The Fire Department night shift prevented the blaze from spreading during Wednesday night.

According to Phelps, Santa Barbara County officials mandated the evacuation of the Painted Cave community and issued evacuation warnings to the nearby West Camino Cielo, Hidden Valley and Trout Club areas. Some 40 to 50 residents were evacuated to Santa Barbara early Wednesday morning and were allowed to return to their homes that evening once the blaze had been somewhat contained.

The Red Cross hosted evacuees at the Wake Center on North Turnpike Road, and those with animals were housed at the Earl Warren Showgrounds. Other residents opted to stay in hotels or with friends in the Santa Barbara area.

“They were evacuated [Wednesday], allowed back in [Wednesday] evening,” explained Phelps. “The fire did come very close to a couple of the structures but they had engines in there and structure protection.”

Not all of the local residents, however, submitted to the evacuation warnings. Rob Romzick, a resident of the Painted Caves community, explained that he and many of his neighbors remained on their properties, hoses primed and ready to defend their homes from the blaze as the flames licked the hillside barely twenty yards away from the tight-knit neighborhood.

“A lot of this community stayed because they were prepared for the fire or they were volunteer firemen,” said Romzick. “We had 800 feet of hose and we had our animals in carriers, ready to evacuate.”

According to Battalion Chief Jay Enns of the Santa Barbara Ranger District, the Painted Caves Volunteer Fire Department sent 25 volunteers to help the County Fire Department contain the blaze. The volunteer brigade largely comprised young, local residents who wanted to do their part to defend the mountain community.

“[The fire] was in the neighborhood,” said Vance. “The community did their part in clearing low-lying brush in a 360-degree circle around the hillside.”

Vance and his wife spent Wednesday night in Santa Barbara with friends, but returned Thursday to find that the fire had been contained and that their home—from which the flames had been clearly visible—had survived the night intact.

As of Thursday evening, the Los Padres fire had been contained and officials were working to discover the cause of the blaze. Local residents had returned to their homes, grateful for the quick action of official and volunteer firefighters, and the flame-wracked hillsides seemed quiet and peaceful, shrouded in a cloak of thick fog.

With Additional Reporting by Isabel Atkinson