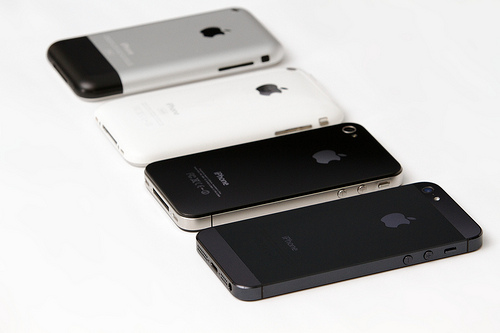 Once upon a time, a company by the name of Microsoft ruled the technological landscape. Each new edition of the revolutionary Windows operating system was hotly anticipated, and its Office software changed the manner in which we all communicate on a business and personal level. It seemed that Microsoft could essentially claim the throne as king of the electronic space. This was the magical, far away time of 1998.

Not even 15 years later, there is a new undisputed leader: Apple. Every update to OSX is hotly anticipated, the iPhone and iPad have changed the manner in which we all communicate—

Well that sounds sort of familiar, doesn’t it?

The iPhone 5 recently hit the market, and predictably, every single available unit was sold. However, there has been a notable amount of outcry surrounding its release. Common criticisms of the phone include a lack of true innovation, an altered connector size (rendering many peripherals now useless) and the abysmal Apple Maps.

This is turning out to be the last straw for some consumers. Is Apple about to fall?

Before we answer this question, there are some points that need to be looked at. Columnist Joe Nocera of The New York Times posits that the end of Microsoft’s reign stemmed from a change in the mindset of the company. Once about technological innovation, after the phenomenal success of Windows and Office, they shifted their focus to simply protecting their lofty place above all other companies. Their platforms became closed systems, and they attempted to basically trap consumers within their product cycle.

Nocera puts it bluntly: “It is the nature of capitalism that big companies become defensive, while newer rivals emerge with better, smarter ideas.” And with the magic of Steve Jobs now lost, it seems unlikely that someone could ever truly fill the giant shoes of Apple’s CEO. So is this iPhone 5 debacle the beginning of the end for Apple?

Apple may indeed be in somewhat of a holding pattern, but at the end of the day, consumers buy the products because the framework is excellent. One of the reasons Apple is the company it is today is that they pride themselves on intuitive and simplistic design. There’s something very fluid and effortless about using MacBooks, iPhones and iPads. Ultimately, nothing works quite like an Apple product, and this is what will keep customers from completely abandoning the company.

But couldn’t that argument have applied to Microsoft less than two decades ago?

Yes, it could have. However, my argument is that the iPhone 5 does not spell the end for Apple. Interpreting the blasé reception as a death knell is a touch dramatic. What this situation does, however, is signal that Apple is at a crossroads. Steve Jobs is gone. Consumers are growing anxious for a bold new step. This is where the company must distinguish itself from Microsoft.

It must innovate. It’s the only thing that can save it. And it can be saved.

It is not inevitable for Apple to become too defensive and be overtaken. While Microsoft was unable to recover, there have been examples of companies breaking themselves out of a slump. Just look at the video game industry; last decade, Nintendo’s GameCube was released and has sold 21.6 million units. Sony’s PlayStation was released as its competition and has now sold 154.4 million units. The industry lamented the demise of Nintendo, which was supposedly being usurped by a new contender.

So how did Nintendo respond? By releasing the Wii, which has sold over 100 million units. The PlayStation 3 is set at roughly 64 million. Nintendo rolled the dice and innovated with motion controls and new peripherals, and it became king once again.

Apple isn’t done. Not yet. They have an enormous consumer base, a time tested product and a lot to lose if they fail to live up to the high standards that they themselves set. All that is necessary to satiate their customers and reassert their dominance is one more big innovation. And even without Steve Jobs, it is incredibly possible. They just need to roll those dice.