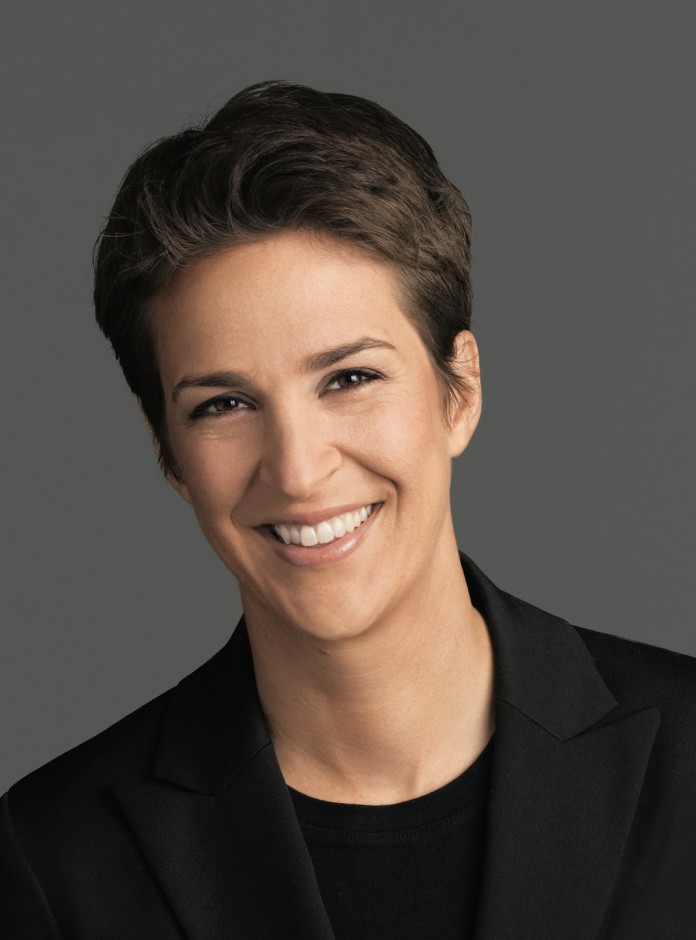 Waiting in line before the show was University of California Santa Barbara’s own hyperventilating Susanne Kanavel, a first-year dance and communications double major. Self-identified as Maddow’s “number-one fan,” Kanavel joined the Maddow following after discerning that the MSNBC host “tells it how it is” and Maddow is the “best person to get the news from.”

Dressed in sneakers, belted slacks and a pinstriped blazer, Maddow admitted to being overwhelmed by the size of the theater and the sheer volume of her audience. Being accustomed to addressing few in a television studio, she felt more comfortable when the many attending the event were shrouded in shadow. Maddow remarked on how the Arlington stage was three times the size of the set of her show.

During the talk, Maddow focused on the topics discussed in her new best-seller “Drift: The Unmooring of American Military Power.” After 45 minutes, she answered questions from professors as well as undergraduate students in UCSB’s Global Peace & Security Program who inquired after Maddow’s opinions on such issues as the current state of gay rights, media bias, and the outcome of the upcoming presidential election.

Referencing one of the main points in her book, Maddow repeatedly referred to the “wussiness,” coupled with partisan nature, of Congress in their waxing and waning interest in maintaining the war powers given to them in the Constitution. She revealed her frustration at how comfortable America has become with the notion of war.

“[The change in the] mechanics of war politics [has] gone towards making war easier and ending existing wars harder,” said Maddow.

While answering the questions, Maddow roamed the stage, crouching and gesticulating energetically as she considered each topic carefully. She said that she would not tell the questioners how to vote and coyly predicted a 50/50 chance of either candidate winning the presidential election. As for last week’s debate, Maddow hailed Big Bird as the true winner and reassured the Democrats in the audience that “there are more debates—don’t worry!” In terms of the upcoming election, Maddow said that “the message is more important than the man.”

Roman Baratiak, Associate Director of UCSB Arts & Lectures, described her talk as “thoughtful, informed, funny and serious.” Maddow responded to a list of pre-submitted questions explicitly and with a depth of insight that led her to “[receive] a standing ovation at the conclusion of the event,” Baratiak said.

Maddow also left her audience with a sobering thought. A question from a UCSB student inquiring after her political aspirations prompted cheers and applause from the audience of over 2,000 patrons. However, Maddow quickly answered with a resounding no. While she humbly thanked her fans for the support, she addressed the reason behind the cheers. She suggested that the audience applauded because they agree with her ideas regarding politics and America’s growing comfort towards war. Maddow then asked her fans why they don’t run for office if they agree so emphatically with her ideas and beliefs, and why it needs to be her. The ensuing silence was telling.

Rachel Maddow has hosted her own Emmy award-winning Rachel Maddow Show on MSNBC since 2008. Described by Barrett Sheridan of the Stanford Magazine as having a reputation for being “the sharpest knife in the left-hand drawer,” Maddow got her start in radio as what Sheridan calls “the left’s answer to Fox News.” Among her bevy of honors for her work in news, Maddow holds a Bachelor’s degree in public policy from Stanford University and a doctorate in political science from Oxford University.

With no wish to become anything other than what she is, doing what she calls the “best job in the world,” Maddow serves as an example of this very idea through how unabashedly, eloquently and steadfastly she stands by her own message and opinions.