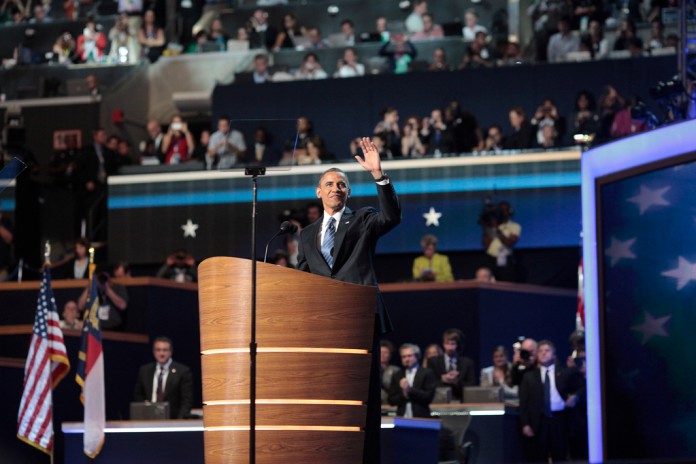 “Madam Chairwoman, delegates, I accept your nomination for president of the United States,” said President Obama. “The first time I addressed this convention in 2004, I was a younger man; a senate candidate from Illinois who spoke about hope – not blind optimism or wishful thinking, but hope in the face of difficulty; hope in the face of uncertainty; that dogged faith in the future which has pushed this nation forward, even when the odds are great; even when the road is long.”

Both Obama’s and Biden’s speeches touched on the key victories of the Obama administration: saving the auto industry, killing Osama Bin Laden and tax cuts for the middle class and small businesses.

And both Obama and Biden made digs at the Romney-Ryan platform.

“Now, our friends at the Republican convention were more than happy to talk about everything they think is wrong with America, but they didn’t have much to say about how they’d make it right. They want your vote, but they don’t want you to know their plan. And that’s because all they have to offer is the same prescription they’ve had for the last thirty years,” said Obama. “Have a surplus? Try a tax cut. Deficit too high? Try another. Feel a cold coming on? Take two tax cuts, roll back some regulations, and call us in the morning!” said Obama.

“Governor Romney believes that kids—the kids we call DREAMers—those immigrant children who were brought to America at a very young age, through no fault of their own—he thinks they’re a drag on America,” said Biden. “President Obama believes that even though these DREAMERs—these kids—didn’t choose to come to America, they’ve chosen to do right by America and we should do right by them. Governor Romney looks at the notion of equal pay for equal work in terms of a company’s bottom line.”

However, both Obama’s and Biden’s speeches did, like the Republican speeches, have some factual inaccuracies.

While Biden claimed that the administration has created 4.5 million jobs for the private sector in the last 29 months, that gain was actually about 4 million.

Obama stated, ‘‘We will reform and strengthen Medicare for the long haul, but we’ll do it by reducing the cost of health care, not by asking seniors to pay thousands of dollars more.’’

In reality, some proposals like revamping co-payments and deductibles could raise costs and increase premiums for certain people.

“If you turn away now—if you buy into the cynicism that the change we fought for isn’t possible—well, change will not happen,” said Obama. “If you give up on the idea that your voice can make a difference, then other voices will fill the void: lobbyists and special interests; the people with the $10 million checks who are trying to buy this election and those who are making it harder for you to vote; Washington politicians who want to decide who you can marry, or control health care choices that women should make for themselves.”

“Only you can make sure that doesn’t happen,” he said. “Only you have the power to move us forward.”