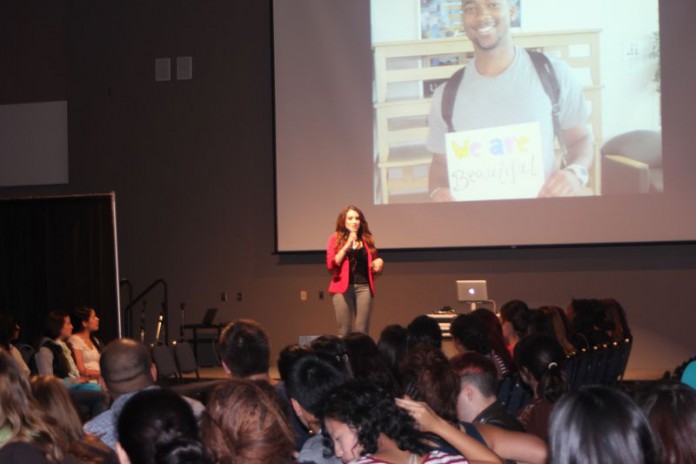 May has already regenerated some of the progressive “Occupy” movements and the Womyn’s Commission organized an “Occupy Your Body” runway show in efforts to appreciate and celebrate the ranges of beauty. A diverse crowd gathered Thursday, May 3 in Corwin Pavilion for the third annual “I Am Beautiful Runway Show” to celebrate the immense identities overshadowed by the media.

Joanna Pineda, co-chair of the Womyn’s Commission and fourth-year feminist studies major is the catalyst behind the show. Two years ago Pineda and a friend created it in order to denounce what society has deemed to be the standards of beauty.

“The idea of creating this show was for those people who felt depressed about themselves,” said Pineda. “This show is a way to challenge the idea of beauty that media portrays to the public.”

The two-hour event was comprised of students walking down the catwalk and spoken word performances. People sported shirts with statistics such as “Ninety-eight percent of women do not fit society’s standard of ‘size 2 beauty.’”

“I hope my spoken word encourages people to question gender roles,” said Ramos. “I’m not focused so much on the sexual orientation, but the gender norms for women who are to be passive versus men dominance.”

While the structure of the show may have deterred male attendees, the idea of inclusiveness permeated as statistics about genders were covered, such as over 40 percent of men are dissatisfied with their bodies.

“I enjoyed how they included everybody in the show,” said third-year political science and Chicano/a studies major Juan Osuna. “The information about male diets was very informative because I really didn’t know about that.”

The openness to participate was readily apparent when students from the crowd were invited on stage to walk down the runway and parade their own beauty. Leticia Escobar, a third-year and feminist studies major and a member of the Womyn’s Commission, who assisted in the production of the show, wanted those in attendance to leave with a redefined idea of self-confidence.

“We want to emphasize the word beauty,” said Escobar. “We live in a world that glorifies the perfect body, and we have to remind ourselves that there is no such thing as a perfect body.”

Although this was Pineda’s final show she hopes for the perpetuity of the show by including it in the Womyn’s Commission Bylaws.

“I want this show to become bigger over the years,” said Pineda. “ Hopefully, years from now I can come back to the 10th annual ‘I Am Beautiful Runway Show.’”