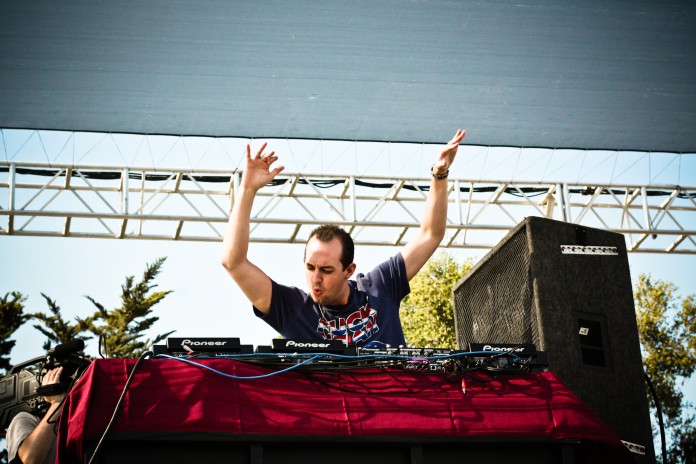 Though hip-hop icon, Snoop Dogg, rallied crowds of students by the thousands this past Sunday at the University of California Santa Barbara’s 34th annual music festival, Extravaganza, it was quite evident that Grammy-nominated house DJ Wolfgang Gartner stole the show.

Snoop Dogg, the event’s headlining act, drew in an incredibly large crowd as he closed the show with many jiving hip-hop tunes from the 90s. However, it was the heavy bass and hard-hitting electro-house beats of Wolfgang Gartner that really got the crowd pumped on Sunday. Aside from the music, event goers enjoyed getting free airbrush tattoos, snacking on refreshments and browsing the artwork on display submitted by fellow UCSB students.

First onstage was UCSB’s own Battle of the Bands winner, The Fire Department. The group opened the show after a half hour delay that left students antsy and itching for the sound of some live music. Their unique blend of jazz, hip-hop, reggae and funk got the crowd on their feet, dancing and singing along with the band. Even Iration, one of the other artists performing that day, agreed that the Santa Barbara band was quite talented.

“We were just watching them. They’ve got a really good groove,” said Adam Taylor, Iration’s bassist. “They’re kind of jammy but they’ve got a little bit of a reggae sound. I just heard someone liken him [The Fire Department’s lead singer] to Stevie Wonder, so that’s a pretty big compliment.”

The group ended their set with a cover of MGMT’s “Electric Feel” that had the entire stadium jamming along with them.

Next up was Surfer Blood, an indie-rock group from Palm Beach, Florida. The band set the mood with their opening song, “Floating Vibes,” off their album, Astro Coast.

“We were just really excited about the prospect of getting to play another show while doing this record,” said John Paul Pitts, the lead vocalist for Surfer Blood, about playing at Extravaganza. “It’s good to take a day off from the studio.”

The band has plans to finish up their latest album and then tour with Death Cab for Cutie in late July.

Santa Barbara natives, Iration, who had a huge following at Sunday’s event, entertained the crowd with their chill reggae tunes during their hour-long set. Playing popular hits such as “Time Bomb” and “Cookie Jar,” the band had the audience head-bobbing and swaying along with them.

“When we started the band, Extravaganza was something that we always wanted to do. Our two goals were always to play the Santa Barbara Bowl, which we’ve been able to do two years in a row, and to play at Extravaganza so we’re pretty stoked,” said Kai Rediske, who is a vocalist and percussionist for Iration.

Throughout the show, the group made shout outs to UCSB students, mostly referencing Isla Vista culture.

“It’s pretty cool,” said Taylor. “Half the band is Gauchos and UCSB grads so it’s pretty cool to come full circle. The band actually started a couple blocks that way.”

Following Iration, Wolfgang Gartner took the stage to get the crowd pumped for the headlining act. Students were excitedly jumping and dancing to his wild electro-house beats as he played popular dance hits like “Illmerica” and “There and Back.”

“Wolfgang Gartner was shredding the turntables like no other,” said Sam Brink, a first-year undeclared major.

The energy during Wolfgang’s performance was incredible; the DJ definitely got the crowd excited for Snoop Dogg’s headlining act.

After students enjoyed nearly six hours of live music, the king of rap was finally ready to make his appearance, drawing in the largest crowd of the day. After much anticipation and a dramatic entrance, Snoop began his performance. He played a collection of 90s hits, including “Gin and Juice” and “What’s My Name.”

He then led the crowd to sing along with him as he performed one of his newer songs, “Young, Wild, and Free.”

Plenty of students mentioned a nostalgia aspect as part of their enjoyment of Snoop Dogg’s set.

“I liked being able to sing along to all his songs and the feeling of nostalgia that I had during his performance,” said Carolyn Sheline, a first-year undeclared major.

“I loved Snoop Dogg,” said Edwin Serrano, a third-year sociology major. “Despite the crowd and limited space to move around in, it was all worth it and brought small flashbacks to how my experience was at Coachella.”