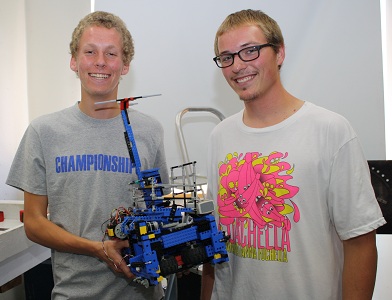 Gabriela Bernal, a fourth-year chemical engineering major and chair of the Engineering Student Council, supervised the week of events.

“This year was the first year that the council took over because last year it was just a student who wanted to do this and she got it all together,” said Bernal. “She laid a lot of the foundation for us, and this year we were just able to take over in planning and getting it done. So it’s a really good event where different engineers get to take a break from doing homework and since we have our facility here where we have computer labs and everything people just like stop doing their homework and come and play and have a good time.”

“I don’t know many people in the other majors either so it’s great to know everyone in engineering because it’s divided and we never really get to see each other. And it also gives us a chance to unite,” said Feng.

On the last day of events, students gathered for a barbeque where the winners were announced and awarded with a trophy.

“We all just come back and saw each other again but in a less competitive environment and it’s a lot of fun,” said Bernal.

“I heard about it during spring insight and they had the girl who originally came up with the idea of Geek Week come give the speech to us when I was in one of the spring insight events,” Blake Husserl, a first-year computer engineering major and a member of the Engineering Student Council, said. “I was just like, ‘wow that’s pretty cool.’ And when they gave us the opportunity to work on it, I was like, ‘definitely, I want to be able to do it and also participate.’”

Megan Chang, a first-year mechanical engineering major and also a part of the Engineering Student Council, said, “when they told us about it, I thought it sounded awesome so I really wanted to participate and help throw it because I was really excited about it so I wanted to make sure it was awesome for everybody else too.”

“It’s mainly just for fun. As engineers we have a really difficult time at this school, so it’s great to have some fun once in a while,” said Feng.