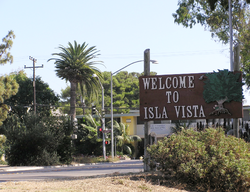 A male suspect is on the run after assaulting a young woman behind an apartment complex on Seville in Isla Vista at approximately 1:25 a.m. early Tuesday morning. According to the Santa Barbara Sheriff’s Department, the suspect, described as a 5’10’, Caucasian and college age, held a knife to the woman at the back of the apartment complex and attempted to remove her clothing. The female victim managed to escape and was later treated at a local hospital for a cut to her leg.

During the investigation, a metal pipe with PVC caps on both ends was discovered. Due to its similarities to homemade bombs, the Sheriff’s bomb squad was called in and four apartment units were evacuated. At approximately 5 a.m., the area was deemed safe and evacuated tenants were allowed to return to their homes.

As of press time, there is no indication that the two events are related.

Katrina Angeja, a second-year psychology major, was evacuated from her apartment at approximately 3 a.m. Tuesday morning after being questioned about the sexual assault.

“A detective came here this morning and asked if we heard her scream,” said Angeja, “but we were all asleep… They were banging on the door and shining lights for a while and eventually we woke up.”

After being questioned, Angeja and other tenants were evacuated while the bomb squad assessed the threat.

“We were hanging out near SOS and then they told us they’d found people in the house and that they’d found the device,” said Angeja. “Then they opened up Embarcadero and kept us there.”

According to an email sent to University of California Santa Barbara students via the emergency alert system, “an investigation is ongoing regarding the attempted sexual assault” and after investigating the metal pipe, “it was determined that it was not an explosive device.”

Drew Sugars, public information officer of the Santa Barbara County Sheriff, encouraged students with any information to come forward and be prepared in Isla Vista.

“We always encourage everyone to be vigilant and on guard in their surroundings,” said Sugars. “Oftentimes people expect law enforcement to just show up and solve the case and really it comes from a partnership.”