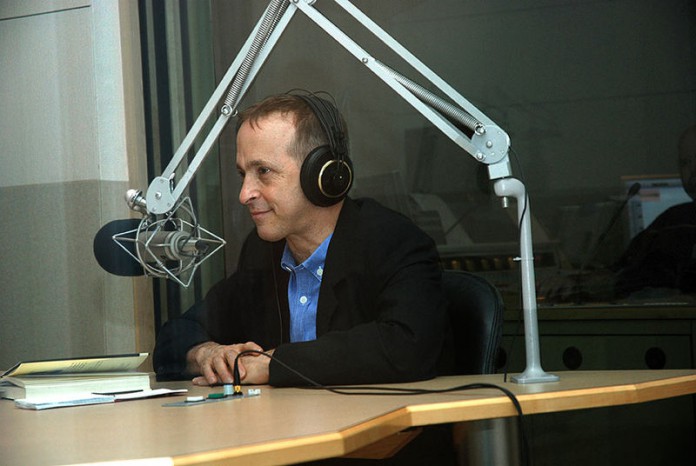 Over the course of his career, National Public Radio humorist and nonfiction author David Sedaris has gained a well-deserved reputation for self-deprecating, satirical writing that readers can simultaneously laugh at and personally identify with. Santa Barbara enthusiasts flocked to hear Sedaris speak last May 1 in a highly anticipated talk at downtown Santa Barbara’s Arlington Theater. Sedaris read stories from his various works, provided comical anecdotes and answered questions from the audience, proving that he is just as perceptive and witty in person as he is in his writing.

The audience attending the event reflected the diverse range of appeal in Sedaris’s writing. His work is definitely only appropriate for an adult audience, but beyond that, people of all ages were drawn to hear him speak, spanning from college students to older Santa Barbara residents.

Sedaris got his start as a contributor to Ira Glass’s radio show on NPR, where he read his “SantaLand Diaries,” a chronicle of his experiences working as an elf at a Macy’s in New York City during the holiday season. Now a widely successful writer, comic and playwright, Sedaris writes frequently for The New Yorker, and has several other books of personal essays published, including the books “When You Are Engulfed in Flames” and “Me Talk Pretty One Day.” His works cover a wide variety of topics, but maintain the common thread of detailing his own experiences with sharp, witty humor.

Sedaris began with a story called “Understanding Owls,” detailing his effort to find the perfect gift for his boyfriend, Hugh, on one particular Valentine’s Day. Looking for a unique and meaningful present, he settled on purchasing a mounted stuffed pygmy owl, something that Hugh had been wanting.

Sedaris found humor in the situation, joking that the pygmy owl would become the new status symbol that you could show off, similar to a convertible.

His search for the owl eventually led him to a dubious store that sold not only mounted animals but preserved severed arms and heads as well. At this point in the story, Sedaris abruptly changed his tone from grotesquely humorous to thoughtfully somber. Upon seeing the body of a 14-year-old girl who had lived over 200 years ago, he described being hit with the sudden realization that she had a life of her own once. Although she was still technically growing up, she probably had children of her own, and now she was just a preserved body for people to gawk at. This masterful ability to smoothly transition into thought provoking commentary during an otherwise wry story shows just one of the many qualities Sedaris has as a writer who appeals to many different readers.

Although a few parts like these felt a bit more serious in nature, as a whole, the event was filled with the lighthearted sarcasm that is Sedaris’s trademark. One University of California Santa Barbara student who attended the talk said that it is his favorite feature of Sedaris as an author.

“It’s very witty, but it’s still about his own life. That’s what I love about it,” said Duilan Goldenburg, a second-year physics major. Fourth-year feminist studies and global studies double major Ashley Richardson, who is also a student ambassador for UCSB Arts & Lectures, described what she likes about Sedaris.
“He never really disappoints,” said Richardson after the talk. “I like how particular he is with his word choice, I feel like it’s very intentional. He’s very careful with his words, which makes it more powerful and more hilarious.”

As expected, Sedaris poked fun at himself and his family throughout the show. He joked about his sister’s gift request for “anything grotesque” and his “cheap Greek dad’s” perpetual insistence that he get a colonoscopy, even at an award show where Sedaris was being honored for his work.

Sedaris is best known for his sharp wit that is sarcastic but never mean-spirited, which held true upon seeing him in person. He was a skilled public speaker, comfortably interacting with the audience while holding their rapt attention throughout. Although primarily a humor writer, he also had a remarkable ability to smoothly transition between serious and light topics, which gave the audience something more substantial to consider in addition to the guaranteed laughs that they came for.