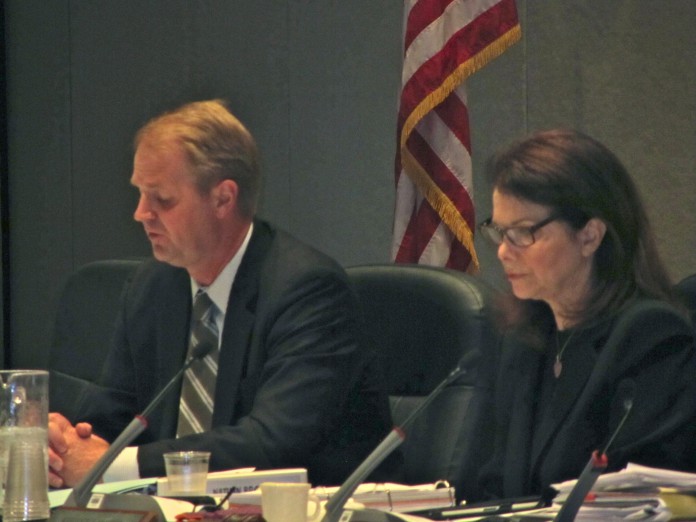 For the first time in 19 years, the University of California Regents convened at the Sacramento Convention Center for their May 16 meeting. This meeting took place in the middle of a three day lobby of state legislators by the Regents to make fewer cuts to higher education.

“Starting yesterday and over the course of the next couple of days, we are teaming up with UC students, faculty and staff to lobby with one voice for the future of UC,” said Sherry Lansing in her opening remarks. “The student support is essential to the success of our lobbying efforts and we’re pleased to have them standing with us.”

Lansing went on to highlight that the Regents are specifically asking state legislators for an additional $125 million for the 2012-2013 budget for prevention of a tuition increase, a fair share of the $9 billion revenue estimated to be garnered by the tax initiative, protecting Cal grants from cutbacks to keep higher education accessible and affordable for low-income students, to make the Middle Class Scholaship Act.

After her opening remarks, Lansing gave the floor to public comment. Thirty-nine speakers signed up to speak for one minute each.

“We can’t keep surviving the way we’re doing,” said Jelger Kalmijn, president of University Professional and Technical Employees and a student at University of California San Diego. “If you’re asking for money from the state, please do so with accountability.”

Kalmijn was one of roughly 20 UC students and faculty who attended the meeting in orange shirts and pants, with signs on their fronts saying “Property of UC Regents” and back saying “Sentenced to Debt.” These students later erupted in protests during the meeting over the imprisonment of University of California Davis students after a protest at a US bank on campus. Chanting “That’s the sound of the students working on the chain gang,” the protestors disrupted the meeting during a review of the recent draft of the UC response to campus protests.

“The process we’ve begun here today is an important step we need to continue,” said William Hamilton, a recent graduate of University of California Merced. “It’s time that we work together to ensure the prosperity we’ve been working toward.”

The public comment session closed with remarks by UC President Mark Yudof, who could not attend the May 16 meeting due to his wife’s illness. His remarks were read by Executive Vice President Nathan Brostrom.

“Let me be clear: as we work through the budget process, our focus will remain on keeping the pain of tuition increases as minimal as possible,” read Yudof’s remarks. “We will also continue our efforts to establish a multi-year funding plan with the state that will ensure financial stability for our entire university community.”

Yudof concluded his remarks by supporting UC Davis Chancellor Linda Katehi, saying “Whatever mistakes were made, Chancellor Katehi has stepped up and taken full responsibility. She has continued to set in motion corrective steps to ensure that these mistakes do not re-occur. And I have full, unequivocal confidence in her ability to lead UC Davis, not only out of this episode, but also on its trajectory to greater heights.”

This remark also drew hissing and boos from students and faculty in orange.