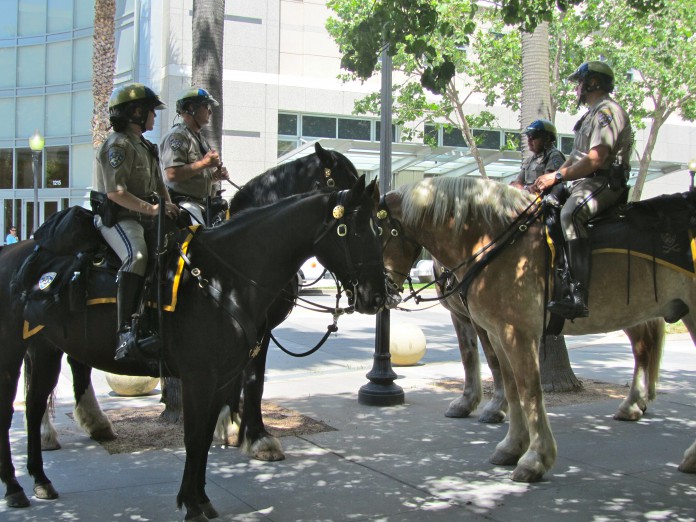 Police were present but not needed during the morning session of the May 16 University of California Regents meeting in Sacramento. An estimated 40 police officers from the University of California Police Department and the Sacramento Police Department were positioned inside and outside of the Sacramento Convention Center with several officers were mounted on horses.

In light of the pepper-spraying event at University of California Davis and the Edley Robinson Report, a system-wide report on police policies and involvement in student protests, police have consciously adjusted their interactions with students. Lynn Tierney, the associate vice president for Communications for the UC system, said that while no new safety techniques were implemented, the police are trying to behave differently.

“One of the things that’s come out of that is that we are trying to be as lenient as possible and as patient as possible,” said Tierney. “But what you saw today was the business of the University interrupted by 18 students who decided to take over the meeting. Luckily we had time for people to go into closed session and so the business is being done.”

This interruption came from employees from multiple UC campuses. Dressed in orange jump suits, the protesters marched in a circle around the audience in the meeting room as the UC Regents moved to a closed session.

Cheryl Deutsch, the president of the University of California Student Workers Union, said it would have been ironic if the police behaved in ways similar to other Regents meeting directly after Regents discussed the report on the UCD event. Deutsch said that, despite this change, the Regents are still not addressing the students.

“The regents have made no real effort to really understand the students concerns,” said Deutsch. “They’re not concerned with listening to the real issues or thinking through the real hard issues that face higher education. They’re just concerned with dealing with the students as a nuisance.”

The movement to closed session altered the planned agenda and Peter King, UCOP public affairs director, said the decision was not an attempt to ignore the protestors as much as an attempt to continue with business and move the meeting forward.

“They just couldn’t conduct business,” said King. “They’re on a clock. They want to go over to the legislature and talk about financing and funding the University of California so they want to get through their business today. It made more sense to double down and get some other business done before the days end.”

The circle continued after the Regents moved to closed session and police intervention was not needed as they dispersed without incident. The protestors represented an array of UC campuses and argued in opposition to police brutality against student protests, increased tuition and the increased privatization of the UC system.

“The UC Regents are closer to Wall Street than they are to the people of California and when they meet, they don’t do our business, the students business and the peoples business,” said Charlie Eaton, the financial secretary for the University of California Student Workers Union. “If they were doing our business, they would be calling for tuition rollback. They would be supporting strong accountability measures in the state budget. So far we’re seeing a lot of UC mismanagement. We need to crack down on that mismanagement, not the students.”

The UC budget stood at the forefront of discussions with the protestors.

“There’s a $1 trillion dollar debt bubble that’s about to burst,” said Claudia Magana from the University of California Student Association. “It’s a huge national issue. Increasing fees is only perpetuating that problem. We’re paying more every year but we’re getting less. We’re having to take out larger loans. There are less jobs available. It’s really a time of crisis for students.”

Eaton said that though the Regents had left for closed session, their protesting and other students protests still serve a purpose.

“We’ve got every reason to believe that students protestors make a difference,” said Eaton, “but it’s not enough and we can’t afford to let up.”